Good morning happy Tuesday! Apparently today is the last day for people to sign contracts. I think we have two left! We'll see if the stragglers decide to finally take 5 minutes to get a bunch of money.
I pretty much just worked on keychains all day yesterday. I used all the interfacing I had bought, which wasn't a ton but I was surprised I used it all.
Anyhow, they are all ready to just sew around the edges and then they will be done! 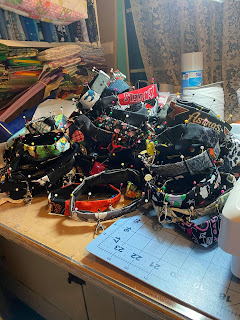 Still binging the Handmaid's Tale I'm on Season 2 Episode 9! I've been using someone else's Hulu account and it has commercials. I've been debating just getting my own and paying for no commercials so I it doesn't take as long to watch.
Last night after Scott was home I went into the kitchen and got stew on the stove and washed the dishes. I went back in the sewing room while it was cooking. I would go in the kitchen every so often and stir the stew. About an hour later Scott was like "are you cooking something?" Why yes, yes I am cooking something, that was all that noise in the kitchen you apparently didn't hear. I swear he is so in his own little world. Drives me nuts sometimes. BTW the stew turned out great lol.
I need to figure out what to make for dinner tonight. I think I will make pork chops.
Pin It
Posted by Julie H at 9:00 AM