Hello Happy Saturday! We made it home in once piece yesterday, just in time for darts!
Let's see last I left off we were in Cheyenne. We drove out to Wheatland the next day with the maybe idea of going to Casper but it was going to snow and it was getting really cold so that was as far as we got. Trevor liked the smaller town more than the bigger one. I was just thinking there are NOT enough people in this area for me haha. Although I guess it would be kind of like living in the river club but you'd have to drive more than 10 miles to get to the store.
When we got back to Cheyenne with went to some stores on the main road. We got a few things in the kitchen store and a couple antique stores. Nothing too exciting. Then we went back to the hotel and eventually decided on Outback for dinner since it was in the same parking lot. I tried to order online but of course that didn't work so I called and ordered and then did the curbside pick up. It was good but would have been better in the restaurant :)
That night the storm hit and it was so windy all night. The wind was whistling through our hotel window so I slept even less than normal.  This was the parking lot before we went to sleep. When we got up most of the snow was gone and it was just slushy. 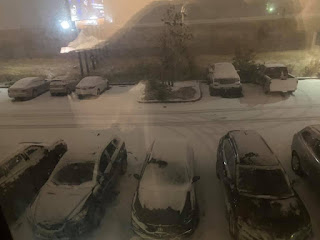 All the roads were closed going West because of the high wind. Soooo we decided to go SOUTH!  My friend Sarah lives in Dalhart, TX so we decided to go visit her. We took an hour longer route so that we could go through one more state for Trevor's list of "been to's".
We went from California, through Nevada, Utah, Wyoming, Colorado, Oklahoma, Texas, New Mexico, Arizona and then back to California. 75% of that looked like the desert. I didn't take may pictures since I did all the driving.
Here is my friends Sarah and her dog Ellie. I was telling Trevor it is kind of funny that I met Sarah online back in the day on a yahoo group for Scrapbooking. She grew up in the area where I live. We got together to scrapbook a lot back in the day and she got me the job where I work now. Funny how things work out! 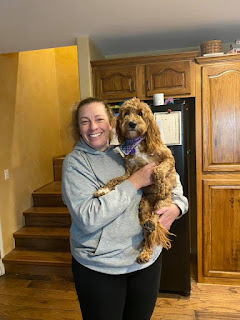 We spent the night at her house and went to breakfast the next day. Then we went a little out of the way to Cadillac Ranch since "why not"
It's all fancy since the last time I was there, they have a trailer selling paint and a trailer with coffee! 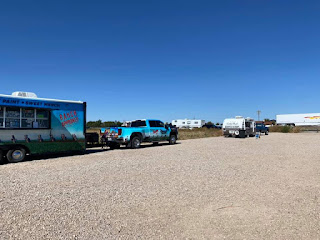 and trash cans! People left partial spray paint cans on the ground so that was super nice. We took 2 from Sarah's but played with some others too. 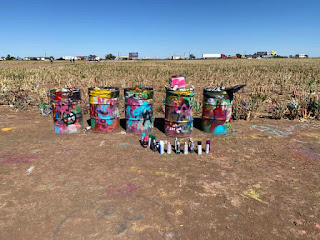 The cars are so caked in paint. It's like they need a fresh coat of one color so you can see what you painted. I only sprayed a tiny bit. 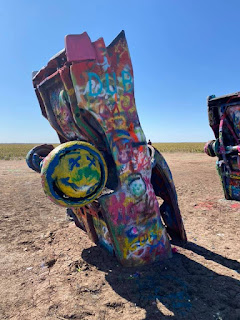 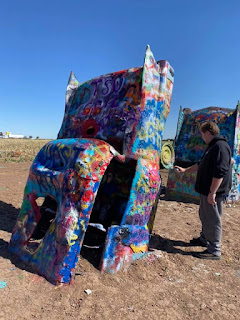 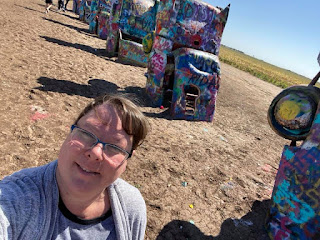 After leaving there it was just "going home". We ended up driving into the sun for most of the drive through Arizona until the sun went down. We stopped to eat in Flagstaff then I decided I could drive a bit farther to Kingsman. The last hour was a bit rough but we made it in one piece.
We got up in the morning and drove home. I missed the I-5 turn off so I ended up on 99 most of the way home in bumper to bumper traffic. There was about an hour of barely moving. Finally saw why, a car and a semi went head on on the frontage road and everyone was stopping to look. If the driver of that car and the occupants aren't dead they are lucky. Very scary!
Finally we got to where I knew the roads and I took the back way by my work and stopped to get us burritos and quesadillas for Melissa. We got home just in time for darts (and to change my clothes). We did horrible at darts but stayed after and played our own games with Trevor and Cassi just for fun and practice. That was a lot of fun!
When we got home I just went to bed to play on my phone and I got a nice hair dressing and back love from Lucy. I missed my furry children! 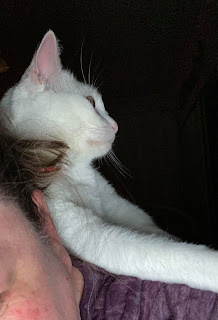 This is what greeted me in the sewing room though. Naughty little ones! It wasn't much to clean up though, I think Tina did her playing in the trash trick. 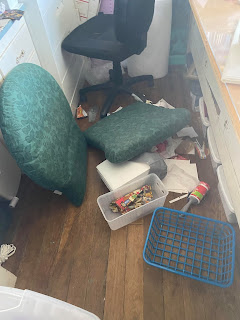 This morning we've had breakfast and I had to mail an Etsy item. Dropped off some mail on the porch for Jess and now I should probably go through some bill stuff from when Trevor was sick. Our insurance is stupid and mails us some checks to pay for the ER doctor and something else. I don't understand why they don't just mail it to the person that needs to be paid. So weird.
Lucy has been zooming around the living room playing with this little stuffed mouse. I've never seen her act like that before! Maybe she will lose a pound!
Tomorrow we are going to celebrate Scott's birthday and then I need to get my diet going so I can straighten myself out. Sigh. Yeahhh chicken and salad I'm so excited ;)
Ok off to do something productive!
Pin It
Posted by Julie H at 12:32 PM