Good morning happy hump day!
Today's excitement is that the oxygen machine and tanks are getting picked up. Sometime between 10 and 5 I think she said. You know, nice and narrowed down.
Lucy said I didn't have to get up today. 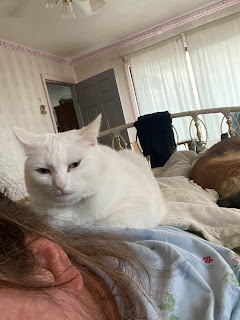 Yesterday I took Trevor to his work to see if he could talk to someone about getting on the schedule again. The only person there to talk to was in a training but he got another HR email to try. Hopefully this one works. Then we went to the AT&T store in the shopping center that has like 0 AT&T service. The irony lol. Ordered a new phone for Trevor since his won't actually let him talk on it. I guess they have nothing in stock. Once the new phone gets here we can trade in his old phone for almost $400. Craziness.
After that we went in to Joann's to get a few things. They didn't have the Looney Tunes fabric I had before so I picked up this gray one, hopefully my customer will like it. More Animal Crossing for a bag for a customer and Trevor picked out the 2 on the right for masks for himself. 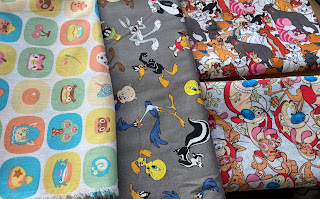 After that we went to Sushi. The place I usually go is closed on Tuesdays now so we went to another one across town. It was hopping in there. The guy next to us was facetiming with someone for a few minutes. I was about to lean over and be like HEYY how's it going since we were hearing the whole conversation but he finally wrapped it up. Didn't take any pictures of our sushi but we got a spicy scallop roll that was super good! Also got the Lion Roll and the Jungle Roll. The Jungle Roll had seaweed on top so that was weird.
Here's Rusty taking a nap on the couch yesterday. Well kind of, he's peeking lol. 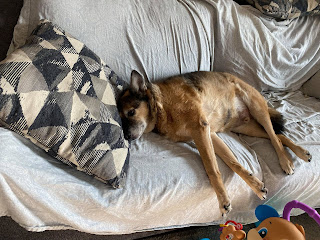 Last night I worked on my Etsy shop some more. I've been working on the zip bag listings. Still have more to do on those. I have 0 emails to work on so might get some of that done earlier than later ;)
Probably go into work tomorrow for a bit since now I have a Dr appt on Friday to go over my lab results. I elected to just go in so I can have him look at some little spots on my face and take my blood pressure. Make him work for my $40 copay!
Probably going to skip bingo tonight, I don't really fell like going. It's a lot to go to Bingo on Wed and Darts on Friday. Went from spending no money to a bunch!
Pin It
Posted by Julie H at 8:58 AM