Good morning, it's my happy I'm on vacation Monday! I started my day by sleeping in.
Well apparently Facebook and Instagram are dead this morning. I was thinking of how different life would be without them now. We do a lot of our neighborhood social events through there.  How would we know when the ice cream truck is coming around haha.
I could not sleep for anything on Saturday night. I tried going to bed early and just laid there forever. I think I finally fell asleep after 11 and then woke up at 3. My plan was to get up at 4 so I just got up at 3:30 and took a shower and got ready to go. I already had the car loaded up. I took my time getting ready and only ended up being about 15 minutes early to my mom's to pick her up (5:15 lol). I played with Mr. O'Malley while she finished getting ready. She came in and said he wasn't allowed on the table. He didn't tell me that haha. 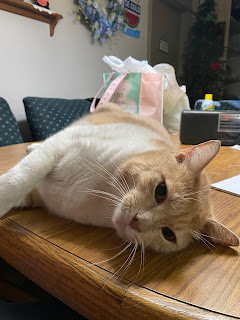 We got all set up nice and early and I was able to park right behind my booth in the bank parking lot. There ended up being two empty spaces next to me on the one side, that has never happened here before. They had been booked so I wonder if they got sick or something. 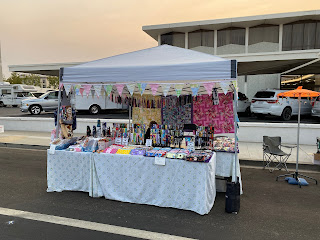 I took all 3 of my tables and the old square table I have too. The spaces here are 13x13 so I knew I'd have enough room for people to walk on all the sides. The people on the right side of my booth didn't even put up a tent which was kind of weird. It was so hot I think they just used the  shade from the other booth near them. They were selling these little beaded glass birds which were cute but she said they got them from Guatemala which annoyed me since this is supposed to be the arts and crafts not the import section. 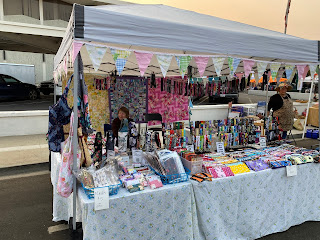 The morning was a bit slow but I think some of those people are like checking things out and then waiting to spend their money. Lunch time was pretty busy and then by two it had pretty much died off with the occasional sale. It got really hot. The weather app said 90 but we were on the black top too and it was a little humid. 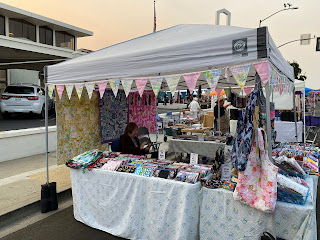 I saw a lot of people walking around with snow cones so I went to find them (the only time I left the booth all day except to go to the bathroom to change once)
Look at the line for the snow cones. I said this will be my next business venture haha. I was very happy to fork over $8 for two small cups of ice to put sugar water on. I guess you'd have to plan for the winter being slow. Maybe have a coffee truck for the winter lol. 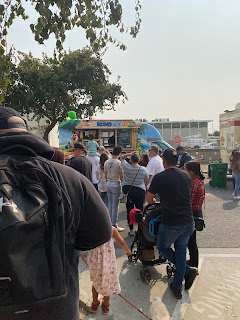 When I took my my home I counted up my money and I brought in the most money ever for a show. That was pretty awesome! The booth fee here is high so that of course cuts into the profits but I sold enough that it was still worth it.
I got home and Scott was like what city did you go to Sacramento? I'm like are you even serious right now? I've told you at least six times including yesterday that I was going to the Lodi Street Faire.  Ended up getting really pissed off that he can't really even take an interest in what I'm doing or what I'm saying long enough to retain anything yet he can tell you any movie line he's ever heard. I went to bed early but had such a bad headache from being in the heat. I got up to feed the cats since they were acting like no one fed them and took some motrin & drank some water. That helped and I was able to sleep until about 8:30 this morning.
The plan for today is to go through my selling stuff (guess I have to bring it in the house first) and take off anything I have on Etsy that I sold yesterday. That will take while. I usually update my listings a bit while I do that too.
Pin It
Posted by Julie H at 11:41 AM

This made me chuckle…I’ve had similar dialogues with my husband. It’s one thing to forget what I told him, but it’s insulting when he has absolutely NO recollection of our conversation from the day before. Especially when I listen attentively to all of his car talk or sports trivia. 😬
Molly from Michigan

@Molly right!?! Mine could win any trivia contest except where did your wife go.