Good morning happy Thursday from Julie's crazy life.
Yesterday MIL slept ALL day except for when she woke up long enough to eat some cereal, take her pill and later eat dinner. Today I come in and she's sitting up with no pants and a long sweater trying to find her sharpie so she can mark off what day it is on her calendar. I never know which MIL I'm going to get when I get here.
Since she was sleeping yesterday it was pretty quiet. Until I couldn't get the toilet to flush. Apparently giving her a bath and doing two loads of laundry has made it so water no longer wants to leave the premises.

He did not come home with a plunger, a snake or a toilet. He messaged me after I got home that we need to call a plumber. Thanks! Where shall we poop and pee until they show up? Did I mention he's leaving before dawn tomorrow to go on his guy's trip and will be back Tuesday? So first order of business today was to call the plumber. I googled and just started at the top of the list. 1st one can't came til Monday. 2nd one can be here between 12-2, you're hired.
I told MIL a plumber is coming since she's kind of with it this morning and she says oh boy the shits going to hit the fan. I'm like there will be shit if the plumber doesn't come. "Nothing is supposed to be done without checking with Howard first". I said Howard isn't here trying to flush his poo. I don't have his number and he probably wouldn't answer anyways. I'm like it is still your house, you are in charge.  She didn't say anything after that. Howard can go f himself as far as I'm concerned. Scott said he told her we don't have to bother Howard he has his own stuff he's dealing with and that I took care of the plumbing for our house. So there.  Lets just hope they can get the toilet to flush and then we'll worry about the other stuff later.
Yesterday's Yo-Yo collection. I did find some more that are cut out but not sewn at home so I'll have to bring those over when these are done. The kittens used to have great fun playing with them. 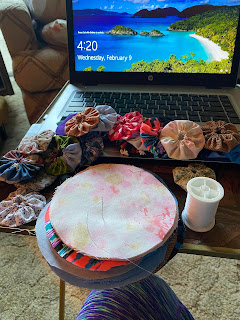 This plant is massive. It takes up a whole counter. I want to move it but I don't want to kill it lol. I have watered it twice and it still looks a bit thirsty. I'm thinking it might need a bigger pot. Apparently I bought this for MIL like 25 years ago and brought it to her in a coffee cup. I faintly remember doing mother's day gifts like that before. Leave it to me to bring it in here and then kill it off all these years later. 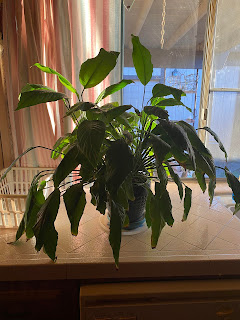 I finally cleaned a little bit more of the stuff on the counter. There is a wood bread box with a spice rack thing  (one has spices in it but I can't get it open). There were 2 tilted canister things with wood bases and lids too (should have taken a picture). Cleaned everything out and washed it but the one spice thing I couldn't get open. Threw out all the open pasta. This is the oldest one lol. 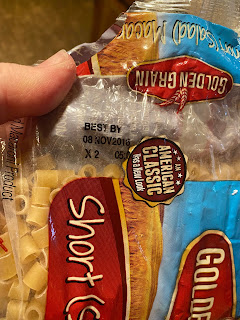 Dinner last night was Garlic Herb Butter Chicken Thighs with broccoli instead of asparagus since mine died from waiting too long to cook it. I made MIL a breast she had in her freezer. She didn't eat much, she kept having issues with her teeth. I think part of the problem is that she does not soak her teeth maybe. She wraps them in a tissue and puts them in her pocket half the time. I'm sure that's great for them. 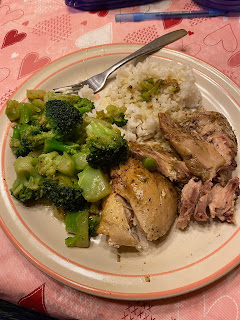 They tore down the Long John Silver's in town yesterday. I remember going  there with my grandparents when I was a kid and also going there when my kids were little. Maybe not Trevor so much but definitely the girls. Melissa didn't like much but s he would eat the hush puppies. It's been closed for years and homeless people have caught those trees on fire at least once. It was fenced and just looked horrible. I'm glad they are tearing it down, it was a big eye sore right when you came off the freeway (although there are homeless camped along long exit ramp  on the other side I noticed the other day. We have so many homeless now it is crazy. 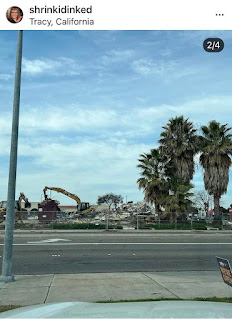 Ok it is almost 10 and I have yet to do any actual work today. I guess I should get busy (and open the curtains in this dark place).
Pin It
Posted by Julie H at 9:47 AM