Good morning happy Wednesday! Already hump day this week is moving right along. Scott leaves Friday morning for his yearly guys trip. It will be a long weekend for me I think! Long days but fast when you look back like the rest of life right?
Yesterday was a good day for most of it. My friend Kristin sent me champagne and chocolates from Instacart. Luckily she told me so I could get it rerouted to MIL's house since Trevor isn't old enough to ID for the champagne lol. MIL and I each had one chocolate and they are yummy. 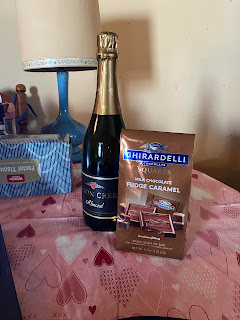 When I got home last night my friend Traci had put this cute card and plant on my porch! 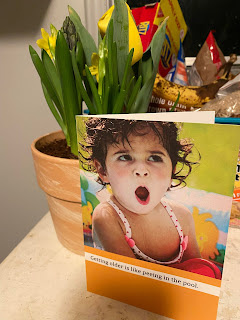 Scott got us La Villa for dinner to eat at his mom's. I think I've had La Villa more in the last month than in the whole last year haha. That's enough of that no more!!  So good but need to eat better. 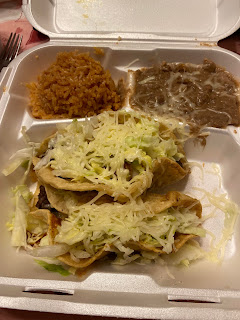 MIL had a bath yesterday and a new braid for her hair. She LOVES her hair braided which I love too.  So funny she tells me I don't have a tender head my mom used to pull me around by my hair! Then I'm braiding and she says that's a little tight haha. I was like what happened to not having a tender head? Took it out and did it looser ;) A little crooked but she liked it. 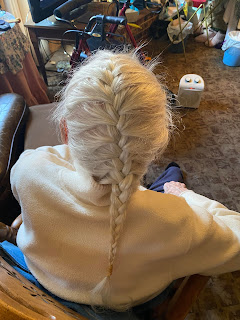 The plumbing in this house is awful. I gave her a bath then washed two loads of clothes and then couldn't flush the toilet (thought it was going over, TG it stopped lol). Later it was ok but ew stuff was like coming up in the tub. They don't have septic TG but the lines are all jacked up. This house was built before Scott was born so it's over 50 years old with all original plumbing. I've already told Scott he needs to just go buy a new toilet for the hall bathroom, that thing has seen better days! Toilets are relatively inexpensive so why mess with it.
MIL was like her old self yesterday. So strange how some days are so confusing and others clear. I wasn't too happy when BIL brought in Suzie's ashes. I was like oh shit here goes the day. I felt so extremely bad for her having her daughter in this small box. I may have went outside to cry quite a bit and it still makes me cry thinking about it. STOP JULIE STOP. My eyes are already messed up from crying yesterday.
Apparently BIL says he's working on hiring some woman to come LIVE IN THE HOUSE and take care of his mom and clean and do laundry etc. WTF. I told Scott and he's like Nope. I told him he's going to have to tell him no in person. I could see having someone come do nights or days but not live here. That brings on a whole other host of issues. Like legally can we just walk in? What if she won't leave if we want her to? Then she would have to evicted. Maybe MIL doesn't want this strange woman in her house? Ever think of that one? I really don't trust other people to take care of her.
Not to mention the plumbing being all effed up. That would have to be fixed before hand also. I just think it is CRAZY that he's making these kinds of decisions and not even asking for our opinions when we are the ones here all the time. I'm sure this is going to be FUN. He didn't even come over for several days (I think Friday was the last time he was here and it was because we asked him to come over and he was ready to go before he even got here).  He really has no idea what is even going on, just playing the puppet master. He really doesn't have any legal powers other than being on her bank account and being able to make decisions if she is not capable, which at this point sometimes she is and sometimes she isn't. Scott also has that ability if he's "not available" which is most of the time. I'm thinking we might need to get a medical POA to replace the previous one since he's really not that interested in her other than to be in control of things. I've never seen anyone with so little emotion. But then I'm an empath so yeah.
So anyhow, hopefully today is a good day haha. MIL has been sleeping all morning. She hardly slept at all yesterday. I'm already caught up with my work emails and stuff to do for that so that was quick for being off a day. Some day soon I'm going to have to go into the office and catch up on printing things out again. Might ask if I can come in on a Saturday or maybe Scott can take a day off one day. Or maybe I'll just wait until they make me come in haha.
Pin It
Posted by Julie H at 11:00 AM

I think you made some really valid points on your BIL and maybe you guys taking over. I don't think he has her best interests in mind her as you two do!

In Michigan we had both a Power of Attorney and a Medical Power of Atty when my mother became ill. They covered different areas. I recall it was important to obtain them while my mother was still able to voluntarily sign for them, rather than have to have her declared mentally unfit. I was first in line on PoA and my sister was second, which meant she had to defer to me unless I was ‘unavailable’. This was not adversarial, it was just protocol for decision-making. (Being at work doesn’t count as being unavailable)

Obviously, different states have different laws and it was 10 years ago so things may have changed. I think transparency is really important between siblings and with a parent who still can do some thinking. Explain, explain explain with them why you think it’s important.

Sweet jeezuz, I agree about hiring someone to come live there around the clock—go slowly. It can be a can of worms. Does her county have a senior services agency that can give you resources/information?

@Molly, good to know. Some days she has good days where she knows what's up and other days she can't remember what is going on at all. Years ago I saw the papers, she let me read them. When my FIL died BIL took the whole kit and caboodle. I found the draft papers when I was cleaning and it has the name of the attorneys so I was wondering if maybe we could call and get a copy. Also wondering if we could maybe just update her medical POA without worrying about those (I know we can just opening a can of worms to do it).