Good morning happy Fri-YEAH! I'm so excited to sleep in tomorrow.
MIL was sleeping when I got here this morning so that is nice. I need to go tip toe in there and get my coffee in a sec.
Yesterday was pretty uneventful after the morning excitement. I took a nap after work lol. IDK why I'm so tired other than taking the dog out at 3am. Yes, had to do that again this morning even though I took him out at 11pm last night. What a jerk.
Dinner last night was SO yummy. The pork chops started off with bones but they all fell off while it was cooking. Next time I'll use boneless chops and there WILL be a next time haha. The potatoes are the foolproof scalloped potatoes I make all the time. The picture is making me hungry again. I've been using up the canned vegetables in MIL's pantry. That was the last of the peas. That is mostly what she ate for dinner. She keeps either biting herself somehow (puts up quite an act when she does it so I almost wonder if she's making it up) or her teeth fall out when she's eating.  I imagine this will become a bigger problem somewhere down the road. 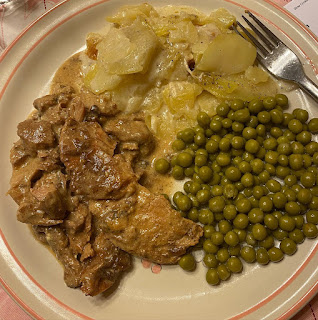 After dinner I rushed home to play with my sewing machine lol. Finally got a few coasters all done. Definitely need to make a larger seam allowance on the next round,  These are the more scrappy ones that I put together last. 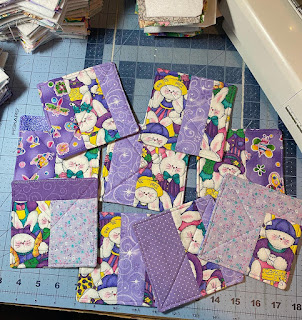 and the other sides 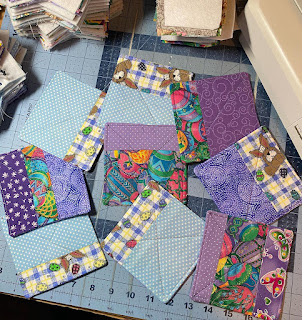 If nothing else they are fun to put one with an order as a free gift. Something to do and using up all those small Easter fabric pieces.
Trevor's birthday is Monday so we need to figure out what we are doing for that. He keeps saying he wants to BBQ and I'm like you'll have to be the one BBQ'ing since no one else will be here all day. So there is that. Need to get that figured out by Sunday lol. Hard to believe he is going to be 19 already.
We have darts tonight so I am not going to cook a big dinner. Might go pick up In & Out or something. The club has fish & chips for dinner tonight but it is always almost sold out by the time we get there and then it is an awkward maybe I don't have enough thing with the gal that cooks it. She is really effing weird sometimes.
Tomorrow we also have a darts make up game. I was hoping Scott could come since it is on a Saturday and less rushing around but we'll see how his mom is doing.
Well that's about all I've got for today so far! Hopefully today stays calm!
Pin It
Posted by Julie H at 9:12 AM