Good morning happy Sunday! I can start over on 0 for days since I last cried. Pretty sure I have PMS too so that's not helping haha.
The dogs didn't wake me to go out last night but someone peed on my bed so that's not any better! I went out to wash my bedding and came back in to literally 37 messages from my son asking me to bring him his walled he forgot and 1 from my husband venting about his mom.
I might need more than coffee for today. Took the kid his walled, had to get gas, called the husband and talked for a couple hours for different things we might need to try for his mom so we don't all want to die. He's going to call in tomorrow so he can stay with her while I watch the baby in the afternoon. Jess has her ultrasound at the high risk place and her bf can come too finally. Tomorrow is also Trevor's birthday so we were trying to figure out a bday dinner. I think since I'll be home we can just cook something since that sounds easier than finding a good BBQ place that is open and close by.
Good God my dog keeps whining. He's already been outside on the lead for about an hour but he wouldn't stop barking at things.
So Friday night we had darts, I left my mother in laws at 6, Scott got there at 6:30. She was sleeping when I left so I left a note for her on her walker. When he got there at 6:30 she was getting ready to head to the neighbors because she had been "alone ALL night". Uh yeah it's been 1/2 an hour. Her poor brain is so confused. I told Scott we are just going to not be able to leave her at all anymore.
I got home with enough time to slap some make up on and put on some real pants. We actually won our dart game (Eric played for Scott) so that was fun. I hung out at the bar with my friend Dawn for a bit afterwards.
Saturday I got to sleep in a bit then showered and went over to my friend Traci's house. One of our neighbors died a few months ago and some other neighbors have been helping her husband clean stuff up. They took all this craft stuff over to my friend Traci's house. 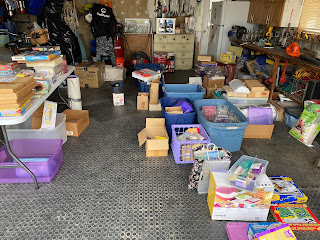 I may have a full car now. Some to try and sell since no one else will probably want it and some for me and the kids. I came home with 3 Cricuts. one is the original like mine, then I found 2 others so I have to see which ones are the best and then probably either sell or give away the others. Jess wants one for sure so either she can have mine or one of those. (2 are newer than mine but I'm not sure what level they are).  So that was fun. Still need to unload my car. Probably have to just put the stuff in my room for now while I go through it. I'm going to put a bunch of books on the sewing sale group on FB and see if anyone wants them. If not I'll put them out for free then donate what is left.
When I got back I was washing Trevor's week of dishes (grr) and then Jess and the little one came over and vacuumed for me. That was so nice! After they left Melissa & Eric came over and we got Linner from the corner store then went and did our make up darts game. We lost but it was still fun. We came back to the house and they played a game and I did a bit of sewing. Later Jess brought me some TP since I was almost out and I asked her to pick me up some when she went to the store. Daniel was wearing his cute PJ's my friend bought him. She sends him a little outfit/shirt for all the holidays. 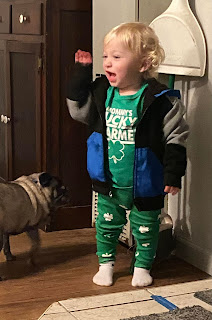 Got all these done now 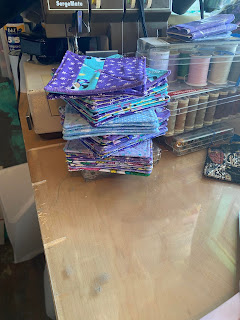 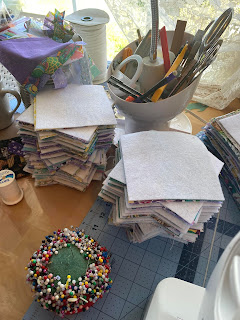 I've been spending my morning sitting here being depressed. I need to go cleanout the car or sew so I'm trying to decide which one I want to do lol. I will go to the store later I think after Trevor is home and get stuff for tomorrow. Will be more fun for him to go with me.
Ok that's my last couple days. Some day I'll be less depressing ;)
Pin It
Posted by Julie H at 10:56 AM

pms my ass woman - you are perimenopausal. Get used to the crying.
That grandson is so damn cute Julie. I want to squeeze him!