Good morning happy Monday and Trevor's 19th birthday! Can't believe my little squishy is 19 already. Probably won't be long before he flies the coop and leaves me. So sad but hey I'll have another craft room hahaha. No but in all seriousness he is a lot of fun except for when he leaves dishes and messes all over. 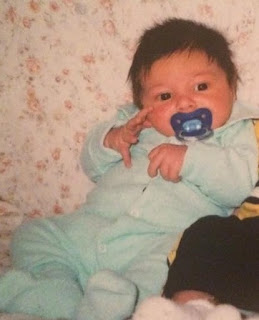 Yesterday I ended up going over to MIL's to give Scott a break. She really likes to give him a run for the money and things bother him that I can let roll off. Mostly because it's his mom and he hates seeing her like that, which is totally understandable. He went to the grocery store for her house and then came back and changed the oil in my car. I said it was like the old days when I'd sit and talk to him while he worked on his old pick up lol. 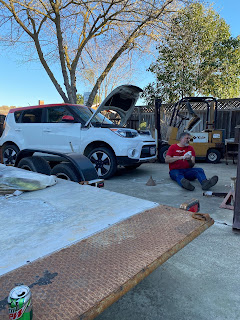 I worked on cleaning off this big file cabinet thing we decided to use for a dresser for his mom. I found another thing of pictures that are all my kids, mostly just Jess. Here she is with her broken leg when she was 3. We were at a party at the neighbor's house behind us and the kids were on a trampoline and large boy either jumped too close to her or fell on her.  So that was fun. 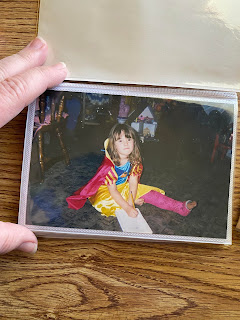 We moved this into the living room, it's actually a much nicer fit than the table that the TV was on before, more room to move around. We both hate those blue cardboard drawers so those are going next. They are just full of random crap. This house has so many cabinets and closets and they made all this extra carboard storage instead of just cleaning out the old crap. And yes, those are towels acting as black out curtains. They actually work really well haha. But one of these days I'll make it to Walmart to buy some new curtains for under the drapes. There is a café curtain under those that is see through from being in the sun so long (3 layers, drapes, towels and café curtain).  There was also a ton more of those plastic shelf things that Scott already disassembled. Crap and dust catchers everywhere. After I left there I went to the store to get stuff for Trevor's birthday dinner. I was just going to order food from somewhere but that was making it even more difficult so once I decided to be home for the day, cooking it is. Trevor will do the bbq and Scott is going to cook ribs at his mom's house. We'll probably have to go get them since I doubt he's going to ask his brother to come hang out with his mom like I suggested. We talked about bringing her to our house too but she's just so out of it most of the time.  I did two loads of laundry at the house there before I left and the plumbing is all backed up again. Sorry Scott. So now he is dealing with that while he is there today too (better him than me though).
I've been doing horrible on my diet the last couple days. Need to get my shit together (tomorrow) because I was actually starting to see my chin line coming back. 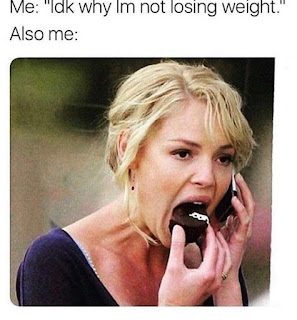 After I got home I did a little bit more sewing on the coasters. All the fleece is ironed on everything. The batch on the right is sewn once (needs to be flipped and top stitched and then they will be done) and then the ones on the left still need to be sewn. Also fixed my friends mask for Dr Suess week (needed a new nose piece). It's ok I'm not busy sure I'll fix it ;) It did only take like 2 minutes so not too bad. 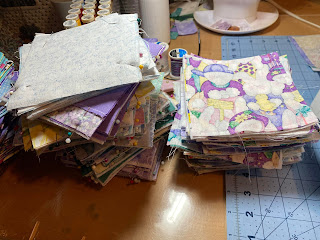 Once I'm done with my coffee I am going to shlep this stuff into my bedroom for now (except the big cruicut I already put in my sewing room). 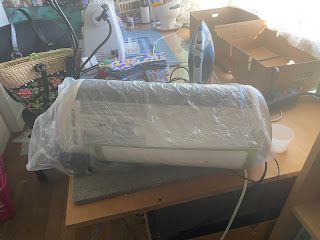 This is all the stuff I got from the neighbor for free. All these books I will just try to sell, if they don't sell I'll put them out for free and then donate what is left. I just hate seeing this stuff go to the landfill when I know there are people out there that appreciate it.  I'll work on this when I'm done with my Easter coaster project. 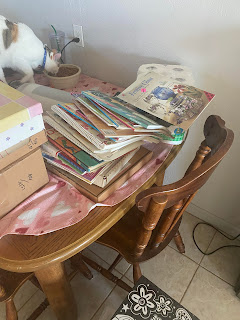 Got the fuzzy box for one of my nieces and the track thing for Daniel. 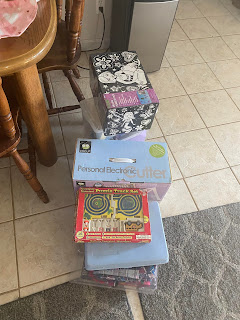 I'm home "sick" today, really did need a mental health day anyways so I can relax while I get stuff ready for later. I have over 100 sick hours so need to use a few. 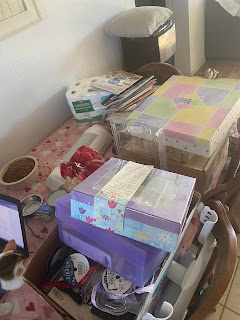 Ok off to browse online a bit then it's cake cooking and mac salad time. 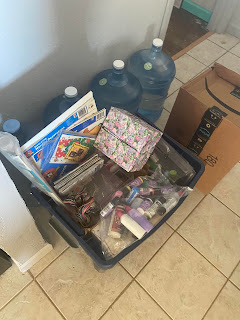 I just went through piles and more boxes that we set aside for later. Later has arrived. Damn it.
It's been 4 months. I may never feel moved in. If you need a break from your junk you are more than happy to come help me with my junk. I'll even feed you!!