Good morning happy..looks at the date on the calendar...Thursday. Ah just today and tomorrow and then I get a break day. I'm so excited for the weekends now I feel bad about it.

This morning I was running a bit late. I slept good because I stayed up later and made the dogs go out before I went to bed. Rusty did make some noise at some point because he's having a hard time jumping on the bed (I have some steps but they are too much for small dogs for him to use) but eventually he made it up and quieted down. I'm going to have to figure out a small step for him or something.

Anyhow, when I woke up Trevor was in the shower so I have to wait for him to get done and then wait a bit longer for there to be hot water again, no skipping a shower for me today. Then I had to get everything ready and feed the animals and take out the dogs.

When I got in the car I was thinking to myself how amazing it was that I used to get three kids and I out the door before 7am every day for years. I really need to work on getting up earlier again.

So I pull up to my mother in law's and she's coming down the ramp with her walker to go to the neighbors to "get help" because I wasn't there when she woke up and got scared. Two and a half hours she was alone. Aye aye aye. I may have tiny bit snapped at her when she said she rudely that she wasn't supposed to be left alone. I was like I'm only a few minutes later than I was yesterday and no one is paying me to be here and put in a time card. Sheesh. I felt bad and apologized a few minutes later and we made up (she was mad at me for being late).

I told Scott she needs to go to the doctor so she can get a dementia diagnosis so we can work on getting more help. From what I've been finding out that it all starts with the doctor "ordering" some help for us.  I don't think it will be much or what we really need but maybe something is better than nothing. I'd push for her to come to live with us again but we have animals that I'm sure she'd complain about (and I'm not getting rid of those). I don't think she'd come anyways unless we forced her to. It is kind of nice to have some "away" time too. I don't have to do a whole lot for her but just being around someone in her state is mentally exhausting too.

In our emails today was something about putting in our telework order something or other on this work website. I'm like why are they even making us do this crap. Just tell us what we need to do and not make us fill out forms. The boss in charge said we'll go over how to fill it out next week. If we just have to go in two days a week Scott will probably just have to not work the two days that I work. Who knows! Learning and adapting as we go here.

I feel so stressed out this morning I want to eat all the food lol. This came up on my Lose it this morning. This thing is a little behind since I've actually lost 15 pounds and 20 since  I went to the dr and they called me Fat Kathy.

For dinner last night we had Taco Pizza, this stuff is so good but high calorie. I should have made a salad to go with it but didn't have any. 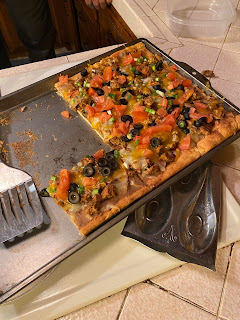 I brought my crock pot for tonight's dinner. I need to go get that going in a minute.

I finished this book I bought at Goodwill already. The Boston Girl. I thought it was pretty good. Probably could have left out the part where they made it like she was telling a story to her Granddaughter since the Granddaughter didn't have a voice in the book. I thought that part was kind of weird. 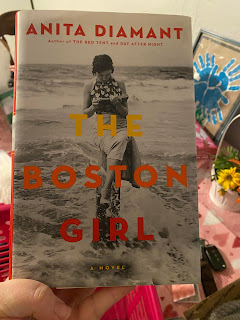 (via Goodreads) From the New York Times bestselling author of The Red Tent and Day After Night, comes an unforgettable coming-of-age novel about family ties and values, friendship and feminism told through the eyes of a young Jewish woman growing up in Boston in the early twentieth century.

Addie Baum is The Boston Girl, born in 1900 to immigrant parents who were unprepared for and suspicious of America and its effect on their three daughters. Growing up in the North End, then a teeming multicultural neighborhood, Addie's intelligence and curiosity take her to a world her parents can't imagine - a world of short skirts, movies, celebrity culture and new opportunities for women. Addie wants to finish high school and dreams of going to college. She wants a career and to find true love.
Eighty-five-year-old Addie tells the story of her life to her twenty-two-year-old granddaughter, who has asked her "How did you get to be the woman you are today?" She begins in 1915, the year she found her voice and made friends who would help shape the course of her life. From the one-room tenement apartment she shared with her parents and two sisters, to the library group for girls she joins at a neighborhood settlement house, to her first, disastrous love affair, Addie recalls her adventures with compassion for the naïve girl she was and a wicked sense of humor.
Written with the same attention to historical detail and emotional resonance that made Anita Diamant's previous novels bestsellers, The Boston Girl is a moving portrait of one woman’s complicated life in twentieth-century America, and a fascinating look at a generation of women finding their places in a changing world.

And last but not least I did another round of work on my Easter cozies and coasters after I got home yesterday. Almost time to start putting them together. The next step is ironing on the fleece. 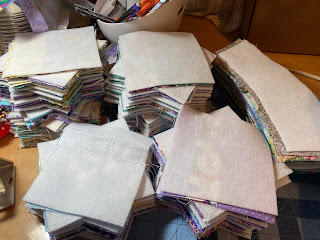 Julie my family had to take my dad to his regular doctor first.
When making the appointment my mom explained that she felt he had dementia and explained a few things going on with him. They understood and made the appointment for a quick evaluation then the doc sent him to a person who specializes in this.
He got medication and my mom was told that if she was the caregiver that was fine but they could get her some help. She took what her insurance would cover. She also used a resource in the community that helps with this and the cost was very low. It wasn't a lot but it sure helped her so he wasn't left alone. She could go to the grocery store and not feel stressed to hurry home with someone there for him. Even if she got a 2 hr break in a day it was so helpful for her.
He fell out of bed a lot too so he could never be alone. Good luck with this. It will give you a break if you can get some help. That would sure be nice. My dad lived until 91 with this. He had dementia for a very long time. He was a sweetheart but it was so difficult for everyone so I know what you are going through. Best of luck!