Good morning, happy 2/22/22 from my sunny spot on the couch at my mother in laws. Totally dragged ass this morning getting up and out the door but there was this fantastic view when I was leaving my neighborhood. You can't really see it in the picture here but there is a large windmill straight in the middle. We can't always see the mountain range there.
All the almond trees are in bloom so that makes it a pretty drive down our long road to town. 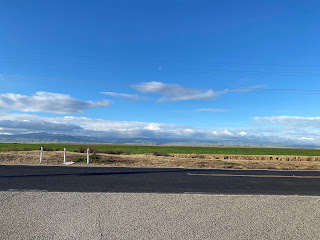 Since yesterday was a holiday and I have finished all the yo-yo's I was working on I was a bit stir crazy. I decided to tackle the front disgusting doors. 50ish years of people smoking in this house. I'm assuming they painted at least once in those 50 years but ew. 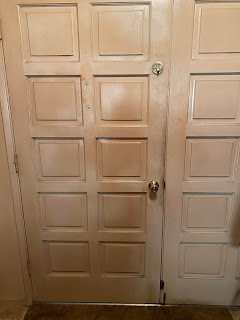 Who knew they were white lol. They need to be painted now but that will happen some day in the far future probably. The walls are disgusting but I have to cut off the cleaning somewhere or else I'll just be scrubbing forever. 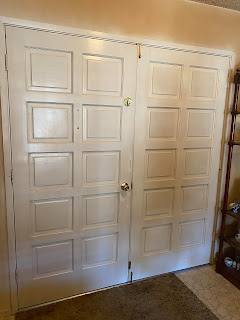 It was such a nice day outside I went on to clean the outside of the doors. There were some weird like grease finger prints on it. I think it is stained wood so I might get some scratch cover and shine it up some more. Also cleaned off all the leaves and dirt for the front walkway. 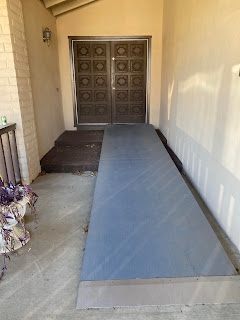 When I was done I was taking stuff inside and mil had her big jacket on and was coming outside. She wanted to sit outside so the neighbors knew she still lived there lol. So she sat on the park bench that is just out of the picture for a bit. The only neighbors that were out were the ones across sideways. They have a fantastic rock yard with succulents. I need to take a picture of it. 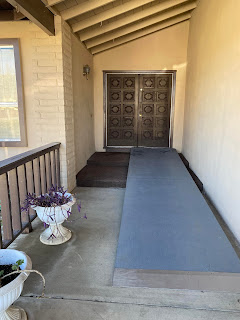 After cleaning I laid on the couch and took a nap for like an hour but didn't even get up til 4 hours later.
I made us turkey and spinach manicotti for dinner (and canned peas out of MIL's cupboard) . I gave MIL 1/2 of one without much sauce and about 1/4 a cup of peas with butter and she ate it without complaining ;) 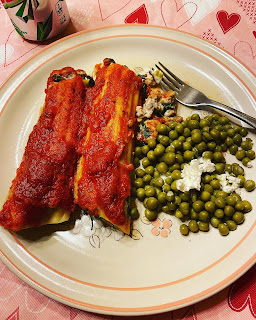 After dinner I went home! I worked on my Easter coasters some more. One more round around the scrappy ones to get them built up to the right size. I got them ironed now have to go through and measure and trim them up again. 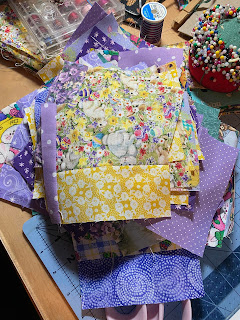 MIL was sleeping when I got here this morning but now I hear her rustling around. I'm in a staff meeting (lol) so as soon as that is done I can go see what she is up to. I'm starving so need to find something to eat for breakfast too. I am caught up on work until someone sends me an email of something to do.
I brought some masks that someone needs to me to fix up for them to unpick the seams on (I think they are mostly to replace the nose pieces) to have something to do while I'm here. That won't take long though.
Ok meeting over! Off to refill my coffee cup and find some breakfast, have a great day everyone!
Pin It
Posted by Julie H at 9:40 AM