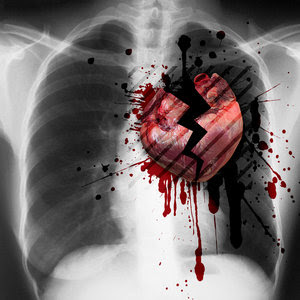 It's the weirdest thing when your children break up with friends and boyfriends (or girlfriends if that's the case). Especially when it's someone that has been in your life for awhile and you've become accustom to them being around.  It's so weird to know that you aren't going to be picking them up anymore. Not going to talk to them. Maybe never even see them again.

If you haven't guessed Jessica broke up with her boyfriend today. He wasn't around for a really long time but it was most of the summer. A summer of me picking him up on the way home from work and having him in the car for about 45 minutes making conversation before we got home and they trotted off together. He left a book in my car the last time I picked him up. Which happened to be the same day that I lost my shit. Great last impression.

I guess he was pretty upset that she broke up with him. I think he REALLY liked her. Too much I think she felt. Oh what I wouldn't give to have someone like me TOO MUCH  haha. It's been a REALLY REALLY long time since I've had someone feel that way, if ever (if you don't count a clingy toddler). I really think I'm more upset about them breaking up than she is!

Well I guess it's on to the next one, I'll try not to get attached next time!

**picture sourcePin It
Posted by Julie H at 9:31 PM

We (my mom and I) felt that way when my brother and his first girlfriend broke up. He was sad but my mom was really upset. I was pissed because Carly was supposed to be in my wedding as the second bridesmaid. And then they have to break up just weeks before. Seriously?! Ugh. Ever since then my bro has been a man whore. And I just ran into Carly- she's married now. It was weird seeing her.

I think about this happening all the time - even though my son is ONE. I keep wondering who will write I <3 Tommy on their binders and hope and pray that he won't break too many hearts.

It does take some getting used to, but now I'd rather deal with me getting over a breakup than Princess's habit of thinking every guy she meets is "the one" and getting her heart broken time after time.

You get used to it mate.
My kids have broken up with many girlfriends/boyfriends AND husbands over the past few years.