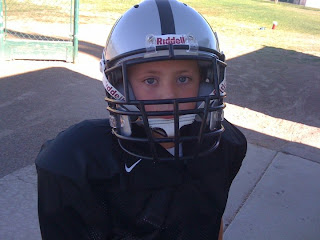 Oh what a LONG day of football today. It started after work when I went to Big 5 to buy a new mouth guard (apparently you shouldn't boil them for 5 minutes..)  The man got Trevor's football clothes washed last night but it was up to me to put the pads in today. So after doing the mouth guard the correct way I sat down to put the pads in. Which only took 2 text messages including pictures and a phone call to figure out. I finally got them done and left them on the kitchen table where the cat promptly threw up her half digested cat food all over the white girdle. GO SYDNEY! So glad we washed that.

So I wiped it off the best I could.

About that time Trevor starts chanting that he is NOT going to practice today and he is NOT going to put his uniform on. He asked if he could skip it (fine with me!) but I told him he had to call his dad (since I knew he'd get pissed if I didn't take him). Sure enough Dad says he has to go.

So here I am with a kid that doesn't want to go to practice and is refusing to put his uniform on.

I tried bribing with ice cream for after practice (against my better judgement) and a few other things. Nothing was working. I threatened him with his life and finally he got dressed. (with me feeling like the HORRIBLE MOTHER for making him go do something he doesn't want to do).

So he's all suited up, go to practice and he gets out there on the field and he's ALREADY barely doing anything. Nice. I've about had it with this football stuff. Apparently ALL the kids aren't doing their warm up drills correctly so they spend MORE time doing all their exercises than normal. Trevor's running/walking by and he's crying. I'm thinking OH SHIT THIS SUCKS! Then a few more kids go by and a few more kids are crying so it's not just mine. Sounds like a really fun sport doesn't it?

At this point I've about made up my mind that he's quitting. At one point one of the coaches comes over and says that he's having trouble with his new mouthpiece and that after practice maybe we can talk with the coach and find out "a way to make him want to play more". I'm thinking, basically make it fun?? Somehow I don't think that's the idea they had.

I got up at one point and Melissa and I walked over to Taco Bell for her to get a bite to eat and for me to eat my stress away relax a bit. By the time we get back Scott is there and I'm trying to talk him into letting the kid quit. I ended up leaving before the practice was over to take Jess and her boyfriend to a party. So when they get home he tells me that he is going to give Trevor $1 a day if he can get ready for football without any problems. The kid seems to think it's fine.

And my kid that had NO energy on the practice field? Is basically bouncing off the walls at the moment. It's only Monday and they practice Monday - Friday. Sigh.Pin It
Posted by Julie H at 8:51 PM

How much do you get for getting him ready and shoving the poor kid out on the field? I think you should demand a margarita a day!

football is a pain in the ass. I won't let Kyle sign up. Besides being brutal on them, it's brutal on parents! not to mention expensive!

I can relate to feeling like a Horrible Mommy. And football does suck. I really enjoyed perusing your blog.

Trevor is going to get rich.
Can I come join him for the $1 too!
lol
They practise EVERY day? Wow.