Catching Up On The Week

Somehow I haven't blogged all week! What the heck? I'm fired!
Or not, I can just play catch up, right? Beware, probably a super long post coming up!

Ok ok so last I left you Monday night I was making some turkey enchiladas. Which turned out way too spicy because I forgot I hate this canned sauce I bought. 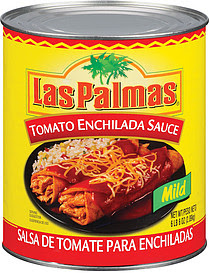 Mild my ass. The kids didn't really even eat any because it was too spicy. I just got heavy handed with the (light) sour cream. They were pretty though. I used this recipe. 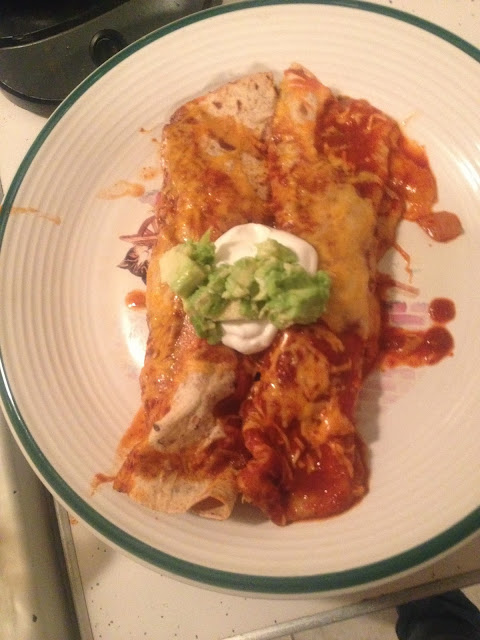 After dinner I went out and ran for my #rwrunstreak and ended up running a pretty fast 5k! I had turned on my pace audio cue for ever half mile on my Runkeeper and oh what a difference that makes for me when I run. Plus my knees aren't hurting as much. Probably because I finally got new shoes. 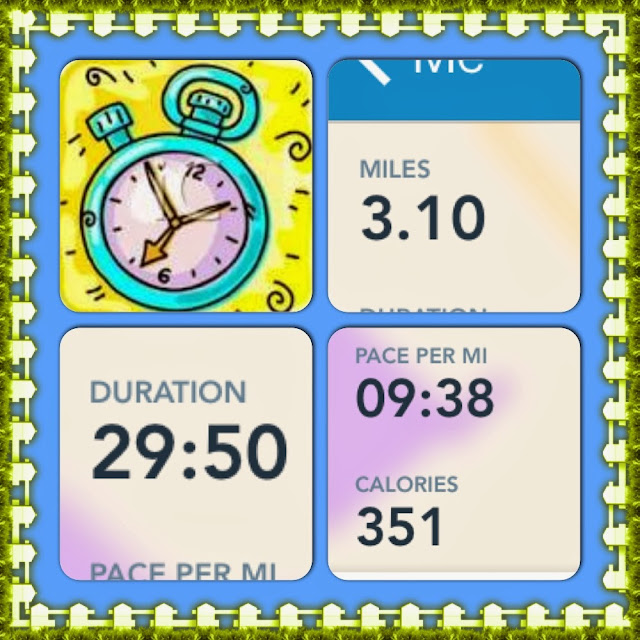 Tuesday morning we had a storm blowing in. COLD wind. Well cold for us Northern CA people! 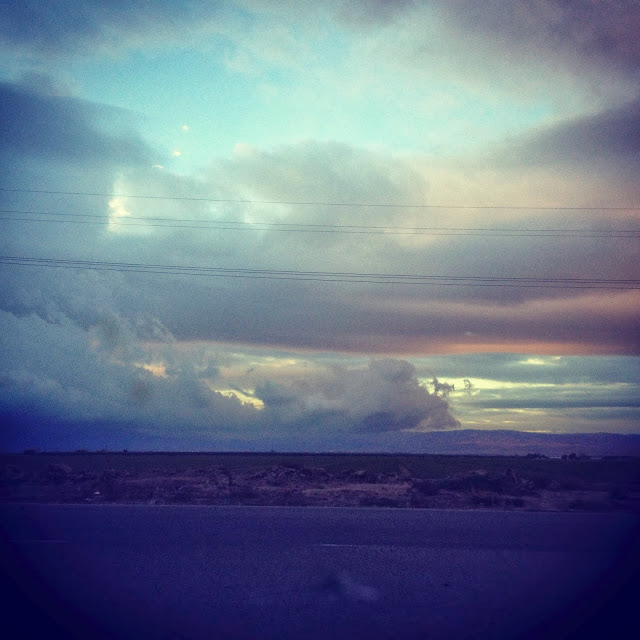 Since we were in town we ran a couple errands, one of which was to get a set of drum sticks for Trevor. He's going to take a 2nd music class at school and do the drums. Cool that he can do that but not so cool that he is now drumming on everything! I find myself just yelling "STOP IT!" without even realizing I'm doing. it. Such a great mom. Anyhow, I'm sure he'll be great at it because he is always tapping on shit just like his dad who also played the drums in high school.

So anyhow, check out my new husband. I traded in the old bearded guy for this clean shaven young man. 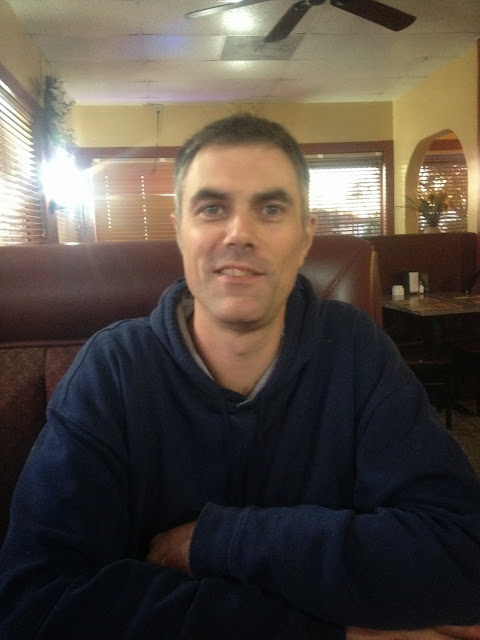 His coloring looks so much better now too. On his way back to fit and healthy! (and back to work on Monday)

I may have ate bad food for dinner. 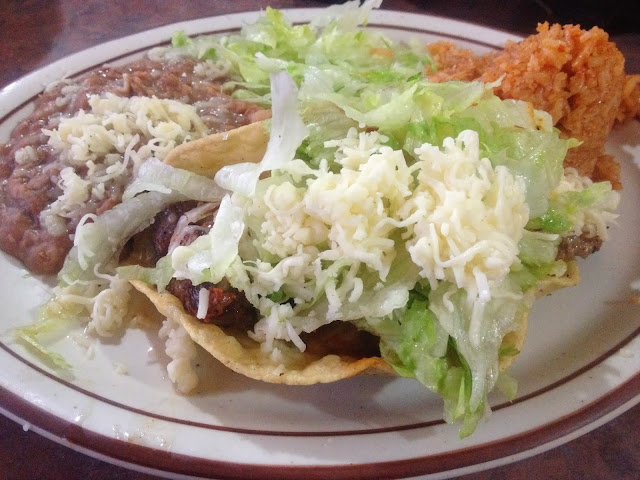 After we ate we stopped at the store to get a few things. I had to the bathroom so bad and someone was hogging the one woman's bathroom so I ran into the men's. I don't know about you,  but I do that all the time. I KNOW it's the men's room but does that mean they don't have to clean it? 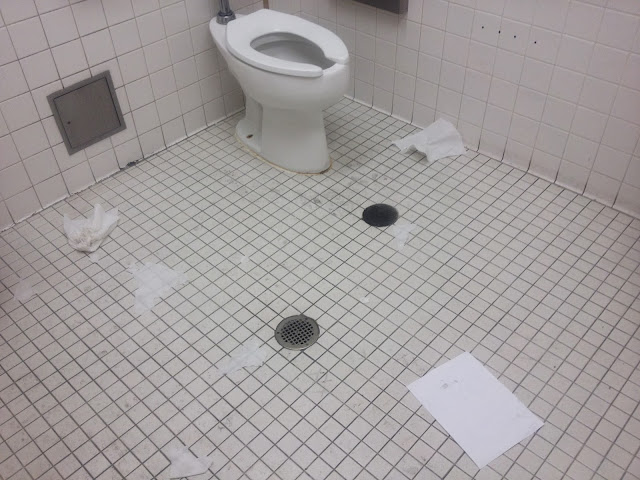 What if I sent my son in there. ICK disgusting. That floor hasn't been mopped in weeks I don't care what that clean up sign on the door says. At least they had soap in the dispenser.

When we got home I did one mile for the runstreak. I ran down the street for half a mile and then ran back. 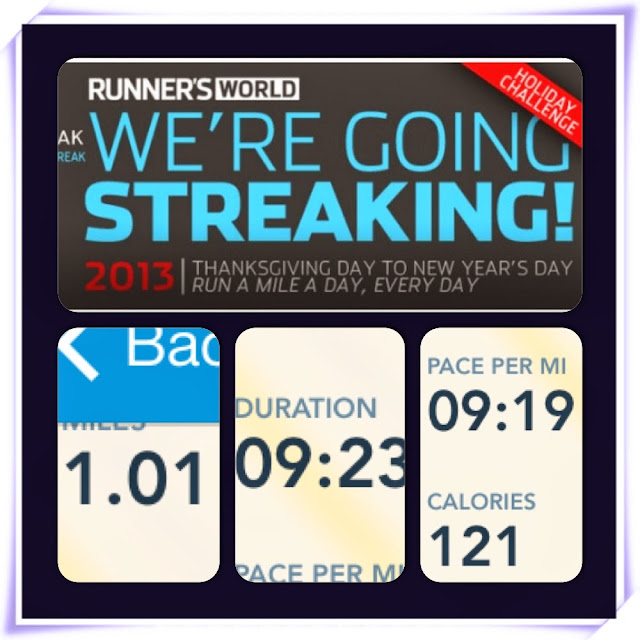 Wednesday I tired out this recipe, yet again, to make mini pot pies. This time I decided to use these little pyrex dishes to make the pies in since my cupcake tins are too small for the recipe. They worked a lot better, but I still had extra filling and it was too doughy. Which seems to me like the pies should be bigger and the dough would be stretched out farther. They were still good though and I was proud of myself for making them! AND using up more turkey! 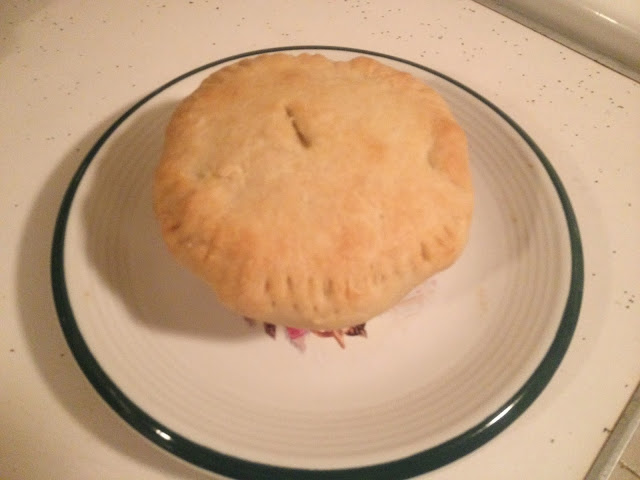 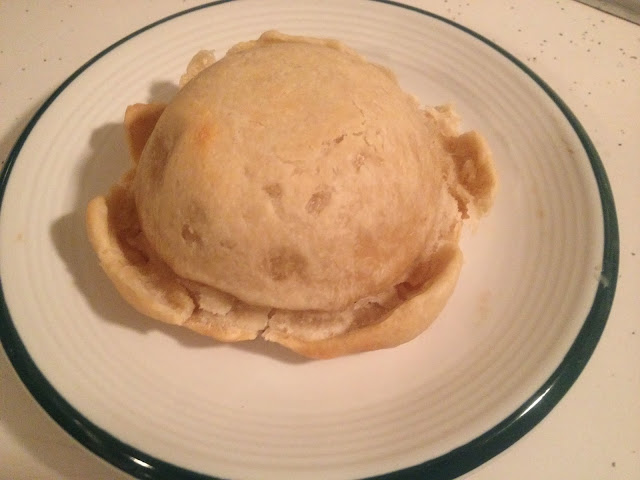 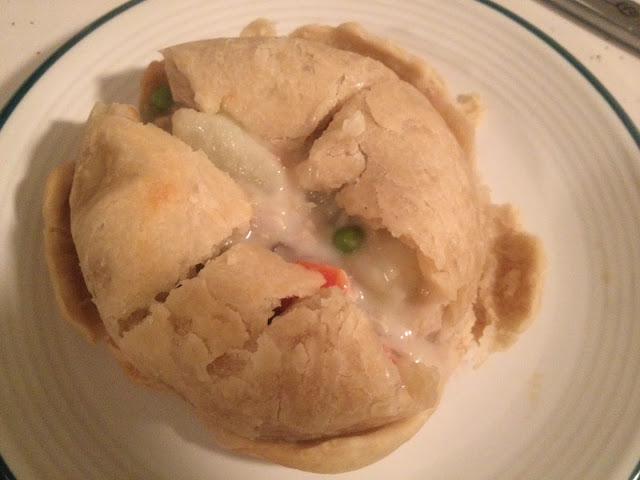 After dinner I went to the gym and ran one mile on the treadmill. I started at 6 but pushed it up a couple towards the end. Longest 9:55 minutes of my life. I hate how my gym has the tv's at a weird angle too close to the treadmills. You have to look almost directly up to see them and they have no closed captioning on so it's just the screen. Dumb. 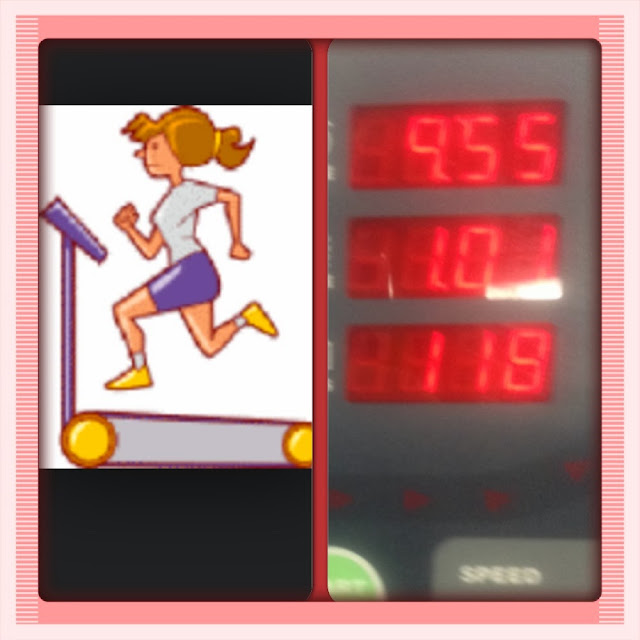 After doing the run I did a little weight lifting. I was there earlier than I usually go and there were a lot of people there. I wore a t shirt over my tank I always wear and it was clinging to my stomach and all I could think about was how fat I looked. All the people and then I was feeling insecure so after half an hour I left. I decided on the way home I need to make up a work out plan before I go instead of just kind of walking around looking for what doesn't have a bunch of people working on it.

Last night we had a hard freeze. The first one of the season. When I got up we had no water. Our water is frequently "out" when they are working on something or something breaks somewhere. Six am is not the time for the water to be out though. I really needed to take a shower but just pinned my hair up and got dressed. The water came on at 6:30 so I quickly UN did my hair and washed it real quick. At least my hair looked ok right? haha

So driving to work, I had to hit the brakes and back up so I could take this picture. How awesome is that? 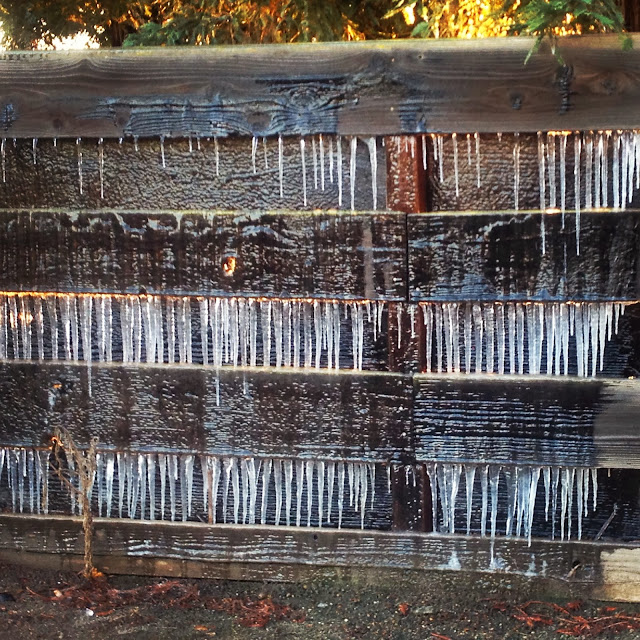 Their whole fence was like that all the way around.

After work I vegged out for a bit and then went and did a one mile run before dinner. I wanted to go before it got dark out and colder but the sun was already going down.
It was cold but I was feeling pretty good and I ran my fastest mile EVER! How exciting is that? I'm kind of liking this only running one mile trying to beat myself all the time. 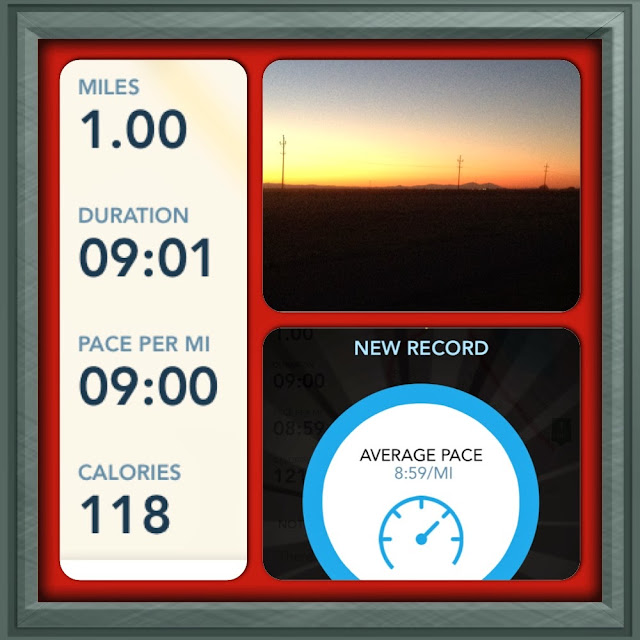 It makes me wish I could hang out with my 8th grade gym teacher and be like eh, I can do that, no problem. I was thinking about how we had to run (I swear that's scarred my life!) and how they used negative things to motivate us. If I was a gym teacher I think I would work more on  positive reinforcement.

After I thawed my finger tips out (must wear gloves next time I run (and buy some that I can use my phone with) I made dinner.

The last of the turkey! Turkey noodle soup. I started it the same way I make my veggie soup (onions, garlic, celery and carrots), and then threw in the turkey stock I had from the turkey (still have one big bowl left of it in the freezer), some water, a chicken bouillon cube for good measure, basil, oregno, the left over turkey and when it was almost done some macaroni noodles I had up in the cabinet. I could have used a bit more liquid but it turned out really good. There is only a little bit left, maybe enough for lunch I still have to get up and put it away. That's the last of the turkey and I used the whole thing. ::pats self on back:: 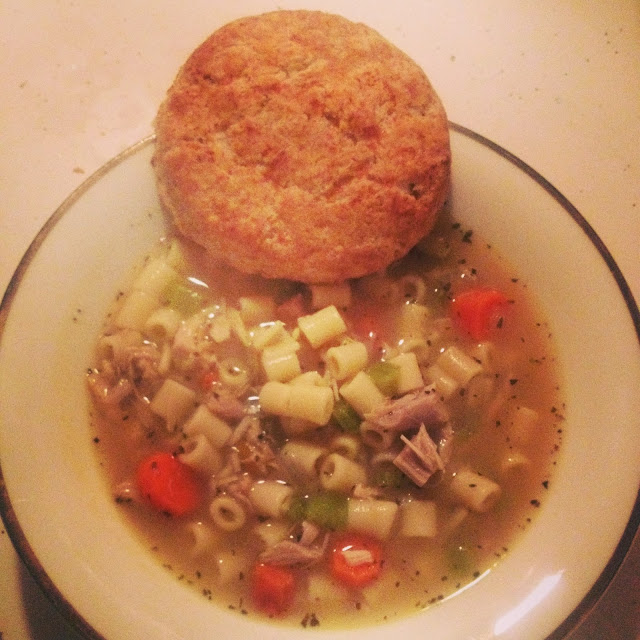 I also made these Garlic Cheddar Biscuits off Pinterest (minus the onions, I knew the kids wouldn't like those) and they turned out really good too. I just made the dough a bit too thin and should have used a smaller biscuit cutter (I used a glass). All 13 are gone so they must have liked them.

Melissa and Trevor are decorating the Christmas tree. Guess that means I should start deciding what I'm going to buy for Christmas gifts.