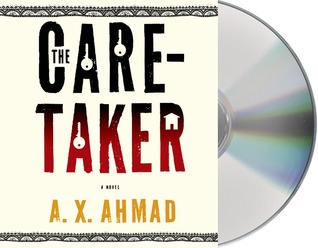 The Caretaker by A.X. Ahmad

Ranjit Singh is a complex man. He was a Army Captain in Pakistan in his "previous life" before he came to America.

He has fled to America with his wife and young daughter. His wife hates it and is in a continual depression. She is in her own little world of misery closed off from him.

His sweet little daughter spends a lot of time with him and they have a great bond. He tries to give her enough attention for him and her mother who is so out of it.

Ranjit is now a landscaper and hand man of sorts. He works for a Senator on Martha's Vineyard, along for a few other people. The Senator's wife Anna and Ranjit have a something going on. What is it?

The seasons are changing and all the summer people are leaving the vineyard, including the Senator and his wife.

Ranjit and his family are living in a run down little house and when there is a fuel leak in the basement he decides that they can just go stay in the Senator's house for a bit. He tells his wife that it's all arranged, but really he is not supposed to be there. His wife love the house and is finally coming around to the woman that he used to love.

But then someone breaks into the house and the shit hits the fan. He's on the run! His family is gone and he has to get them back. The book turns really complex here. It goes deep into the doings of the Senator and the previous life of Ranjit and amazingly they are connected.

Ranjit is against the clock to get everything figured out before he loses his family. Will he get it all done in time?

I really enjoyed the first three-fourths of this book. The last part seemed to just kind of drag on a bit, but of course I still wanted to know what was going to happen. I felt like it could have been shortened up quite a bit and still been a good story. Overall it was a good book!

Interesting, I may have to check this out!