I started a new diet on Wednesday.


I’ve been pretty much all over the place with my eating lately and I’m up about 20 pounds from my lowest, which is really like 10 pounds up from where I was for the most part of last year.  I keep trying to get my shit together but other than running every day I keep falling into cake, cookies and wine.
My mom has been on her South Beach Diet kick again (she does that on and off) and is in the full blown “I’m doing awesome phase” and is talking about it constantly every time I talk to her. Which, is kind of depressing when you are muffin topping out your (size bigger) jeans and eating a cookie to console yourself.


I guess my step dad brought home this “other” diet program from work and they started doing that instead of the South Beach Diet. It’s called the “New Mayo Clinic Diet”. It’s kind of out there but they’ve been having great success with it.


Last weekend I went to my niece’s birthday party and my brother and his wife have been doing it too. I had him send me a copy of the diet plan just to check it out. I went over and decided it sounded do-able so I started it on Wednesday.


Tuesday night I did some meal prepping by boiling some eggs and cooking up some bacon. I made a pack of chicken thighs and salad for my lunches.


Breakfast this week has been two hard boiled eggs, two slices of bacon, and a cup of grapefruit juice. I always thought grapefruit juice was disgusting but now I actually kind of like it. Probably because it’s about the only sweet thing I’m eating or drinking.


Lunch was another cup of juice (you have it at each meal) a salad and two chicken thighs, which wasn’t enough food. I was still hungry, which led to me eating a bunch of random stuff when I got home. I almost felt a like I was binging a bit, if you can binge on half a spaghetti squash, two eggs and a banana. I had that frantic feeling of needing to eat though.


For dinner I made chicken fajitas and minus the tortillas and put it on top of my salad, which was really good and totally filling.


Wednesday I had the same for breakfast, left over dinner for lunch and pork chops and this stir fry veggie mix I cooked up in some butter for dinner.


I felt a little fuzzy after work so I ate a banana after I got done grocery shopping and drank two cups of coffee when I got home (with sugar free creamer-my one bad  habit I haven’t kicked yet). 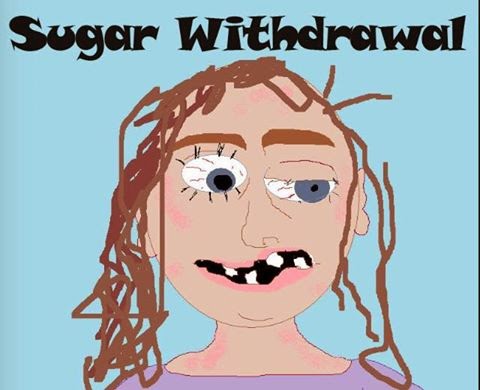 Today I weighed myself and I’ve lost a whole .2 pounds. That is a bit disappointing for passing up cheesecake, ice cream, cupcakes and cookies yesterday at work BUT my stomach doesn’t look as bloated as it usually does so maybe that will work out.
This is just a short term plan that you are supposed to do for twelve days and then take a two day break, and then you can do it again if you want. I know I’m not going to stick to it 100% because I need to eat some carbs to be able to run. I’m just going to try and mostly get those from fruit at this point. The whole diet sounds super silly but I figure if it gets me off the crack sugar and back on track to eating less junk than it will be worth it.
Pin It
Posted by Julie H at 9:10 AM