Good afternoon Happy Tuesday! It took me all day to get caught up on emails today. We have a new "temporary" boss so we have a staff meeting and then he called me a bit ago to go over some admin stuff with me.
I was home alone for awhile yesterday while Trevor ran some errands and got a hair cut. I got totally freaked out when the gaming system came on in his room. I was like WTH is the ghost playing it? Then I looked over and realized it was just Tina lol. 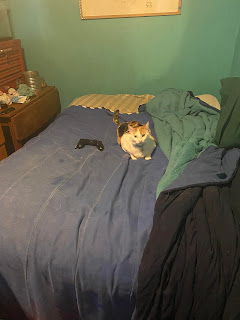 I watched this cutie while his mom and dad went to see his sister. They came over at naptime so he was out in like 2 minutes. Snookie thinks she is his nanny dog and kept wanting to lay on him. TG she finally laid on the floor and then on the end of the couch later. He probably slept for 2 hours. 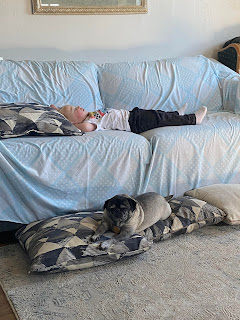 Here is my granddaughter! She will most likely be here June 22nd. They said she is tall. I asked if they told the dr that runs in the family lol. 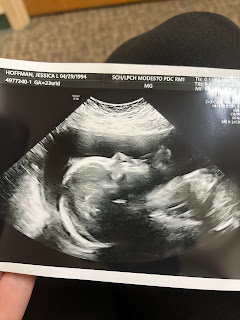 Trevor took my car to town to pick up Scott and his mom and bring them back for dinner. She did a lot better than I thought she would and only threw a fit when he was helping her put her shoes on to leave. Screamed OWWWW and that he probably broke her foot. She is such a drama queen. Two minutes later she was walking on it.
Daniel checking her out haha 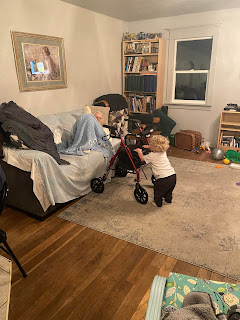 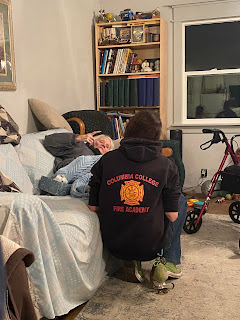 Watching some Wiggles with Grandpa 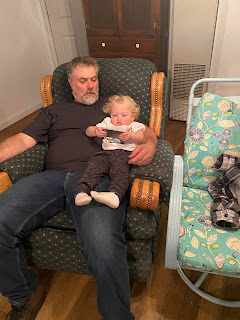 Dinner table, us, my parents, his mom and my nephew Tony 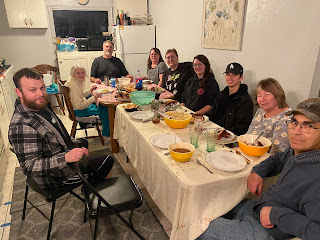 We had ribs, bbq chicken, sausage, baked beans from the can, Caesar salad from a bagged kit, and home made mac salad. 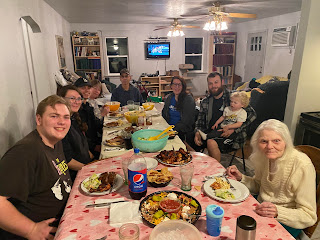 We had lemon cake with lemon frosting and cookies & cream or mint chip ice cream (or both if you wanted it ;)) Trevor always likes to have something different. 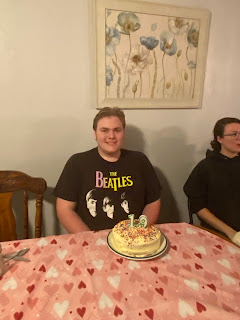 Scott left not too long after we had cake to take his mom home. I told him just go and I'll have one of the kids take me to get the car later. Trevor took me after everyone left.
When we got back I was washing the dishes and washed a glass that had broken in the sink. Cut my hand pretty good and debated on getting stitches or not. Decided maybe it was ok. Jess had some super glue so I put that on there for good measure and a good band aid. So far so good. Hopefully my hand doesn't fall off lol. Mae the picture tiny so not to gross anyone out lol. It bled like crazy at first, I scared the crap out of Trevor. Only Tubz came to make sure I was ok out of all the animals lol. 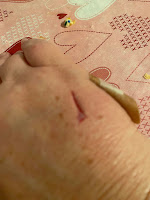 This morning I got to his moms at 6 so I was here before he left. I fell asleep around 7 and then totally overslept. I had the weirdest dreams and they all had his mom in there doing weird things like shape shifting. Hilarious.  Apparently I was exhausted.
Today at our meeting they said we have to start going back to the office two days a week starting next week. I got an exception though for my MIL so I only have to go in one day. Scott had already arranged to take Fridays off so that works perfect.  Until they make us all go back more than we'll have to adjust. I told Scott if I had to go 2 times a week he could work one day on the weekend maybe (his boss is pretty flexible). We shall see what the future holds.
Probably another nap since I can't stop yawing.
Pin It
Posted by Julie H at 2:24 PM