Good morning happy Wednesday! Today is my mother in law's 92nd birthday! I'm leaning towards just picking up In & Out for dinner or something like that. We shall see how I feel in a couple hours haha.

Last night I made this recipe I got in an email from All Recipes. Sicilian Roasted Chicken. I just cut up the whole chicken but left the segments. I didn't use hardly any black pepper since that sounded like way too much and it didn't need to cook a whole hour. Other than that it was yummy and easy. 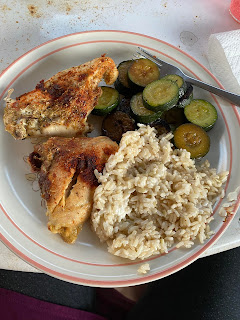 Yesterday instead of walking I took a nap haha. I'm becoming a two nap girl apparently. One in the morning after I get here and one after work. Caffeine doesn't seem to do anything to help me be more awake. It is so weird. This morning I feel like I could sleep for a week. I'm kind of craving a nice dark hotel room.  Just wake me up when life is back to normal. Which normal? I'm not sure, we've went through a few the last couple years.
After I got home last night (around 9 sheesh) I worked on my cozy project some more and watched The Tinder Swindler. I saw this one mentioned when I was reading about the Bad Vegan. People are freaking crazy.  Sad the guy just got off with a slap on the wrist too.
The dogs actually slept all night last night so that was a small miracle.  I'm just sitting here yawning over and over trying to wake up more. I dozed on the couch for a bit this morning and I woke up to a noise and it was Ann in the hallway. I thought she was just going back to the other room after going to the bathroom. Then I got up later and she had the pocket door closed. I went to the bathroom and came out and she's coming down the hall and was like I was wondering if anyone was here. I'm like I've been here for 2 hours lol. She is having her cereal for breakfast. Going to have to try and get her into the bath tub today. Every day I'm like today she needs a bath and then she's asleep all day. Yesterday she was moving around in the morning and then barely woke up for some lunch. Scott had to wake her up at like 8 for her medicine and warmed up her dinner she slept through.
Scott has been driving my old car to work. He got 2 new tires for it yesterday and said it is so much better. He did a bunch of suspension work on it over the weekend. He's already saved some money on gas since it hardly uses any compared to his truck. I've been telling him for years he needed to drive something cheaper (he was taking the train until Covid hit). Hopefully this little car will keep on running! It is getting close to 300k miles on it. Good thing he's a mechanic.
Well guess I should do some work. It took me two days to catch up on emails after ignoring them all day Friday when I was in the office. Plus I had scanned some stuff to myself to upload later. I love when it is busier since it makes the day go by so much faster. Nothing worse than a long boring work day (when you aren't at home with your side projects...)
Pin It
Posted by Julie H at 8:23 AM

Have you watched Wind Fall? Weird.
BTW, I never have a long boring day. I would love one.

This is the only job I've had that gets super boring sometimes.