Hello my name is Julie and I'm tired! I bet you knew that already though! Today is shower day! I need to go throw my pants and shorts into the washer asap. Well maybe one more cup of coffee.  I'm glad the shower isn't until later so we don't have to rush in the morning.

Yesterday I went shopping with Jess and this messy guy. We went to Target, Ross, and the grocery store to get party stuff. Then we went back to her house where I washed dishes and she cleaned. Then I watched the little guy and pulled some weeds while he played and she cleaned the carpet. Eventually I just brought him back to my house and he played while I cooked the mac salad, pasta salad and made a fruit salad (and dinner). She brought these ravioli meatball things for him for dinner haha. He had a swim in the bath tub after that. 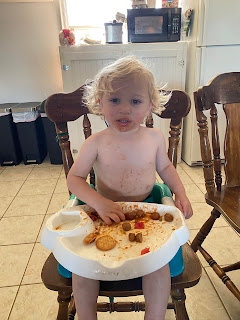 He was running around playing and came back to me crying. I think he hit his head on my sewing table. On the left you can see a dark dot, it was like pushed in but a goose egg around it. Poor guy! We sat for a bit then he went back to zooming. Eventually I took him for a walk and then we came back and both fell asleep lol. I slept like a rock last night, which was good since I didn't sleep well the night before. 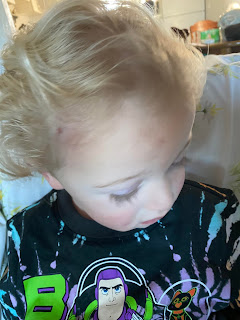 Today I need to go pick up the cake, run into Costco to get some flowers for the tables and then go decorate and party! I'm already tired so hopefully this coffee kicks in soon ;)
I could not figure out why my car smelled like Fritos and finally figured it out. DUH the big bag of tortilla chips from Costco chilling in the back.  I'm a smart one. Lets all pray it isn't super windy today. It is supposed to be in the 90's but the party is at 3 so hopefully it won't take too long to cool down.
Pin It
Posted by Julie H at 9:53 AM