Hello my name is Julie and I'm EXHAUSTED! It's been a kiddos weekend and will continue today. 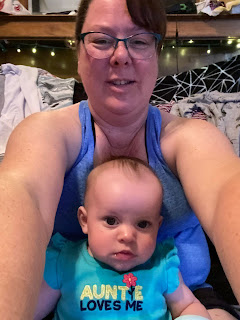 Anyone that has kids in their late 40's is crazy.
Friday night I watched them while they helped big Daniel's dad move. A couple hours was more like six :)Then Scott and I went to the bar for a bit and played darts. He won both games, go figure.
Yesterday morning I worked on Christmas wine tote bags. My plan was to cut one bag out of each of my Christmas fabrics. After going through ONE BIN I have like 20 so that's enough for now lol. I didn't realize I had three bins of Christmas fabrics. Where does it all come from? No idea lol. 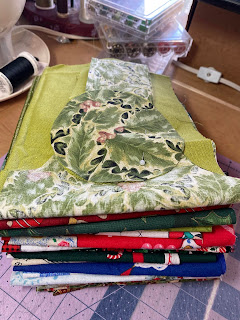 Scott came home before the kids got here and ran the vacuum for me so that was so nice. They were here from 3 until almost 9 while Jess worked. Their dad came and got little D and took him back to the house for like an hour and then I took the baby over there an hour later and hung out a bit longer after he went to work and Jess came home. 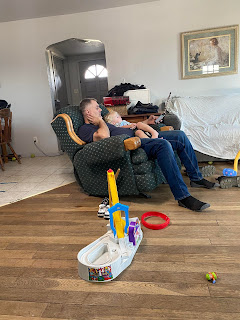 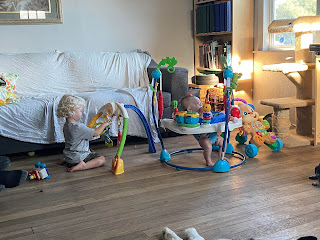 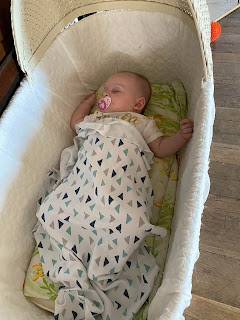 Peeking in at Uncle Trevor, he knows he can't go in there lol. Trevor has too many dangerous things in his room. Also that shit on the table there is stuff Trevor kicked out of his room when he cleaned it and just left it there. I guess I get to figure out what do do with it next. 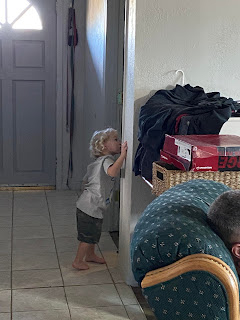 Yesterday my (step) dad went to the ER and got admitted. They already know he has congestive heart failure but he's been doing pretty good for awhile. He hasn't felt right lately so he went in. They are talking about getting him a pace maker. I haven't talked to my mom yet this morning but I figure no news is good news right? Or waiting around waiting for some news.
Her and Trevor were supposed to go on a road trip to Oregon on Wednesday to help her friend bring her car to CA. We'll see if that still happens or not. Hoping for Trevor it does but it doesn't seem all that likely.
Pin It
Posted by Julie H at 9:15 AM