Trevor decided he wanted to ride the bus so I dropped off my baby and his bigger sister to ride the bus at 7 this morning. I hope he did good! I didn't get any phone calls so it must have been ok. Him and Tony are riding the bus home today too. They are going to school until 3:05 so won't get home until 3:30. That's a long day with no kids! Took Jessica to school this morning after dropping the little ones off at the bus and beat the rush of cars going to the high school. Yeah me! Looks like that was a good time to go.

So back to my road trip! I started the trip by having Scott drop me off at Sarah's house Tuesday night so we could just wake up early in the morning and leave. He dropped me off around 9 and I think I went to bed around 11 or 12. I woke up at 2 and had to go potty and then got up at 4, so didn't get a whole lot of sleep! The plan was to leave by 5 but it was almost 6 when we finally pulled out. Her whole family did well leaving dad at home (he's moving out later) and their old house. I would have been bawling I think!

So we hit the road! Do you know what is between California and Arizona on Interstate 40? NOTH-ING!! Absolutetly nothing for 400 freaking miles. 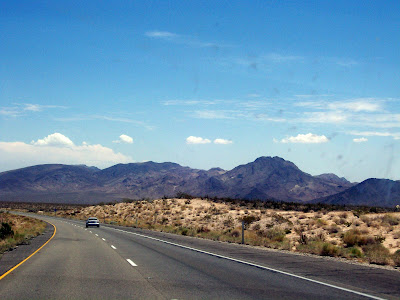 I thought I was going to die of boredom. Luckily we had a little arguing in the back seat to keep us awake. Although I have to say they didn't do too bad for how long we were in the truck. They did argue about "space" issues though. (Which we fixed the next day by taking out some of their "stuff".) 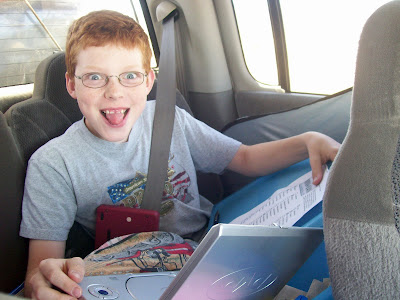 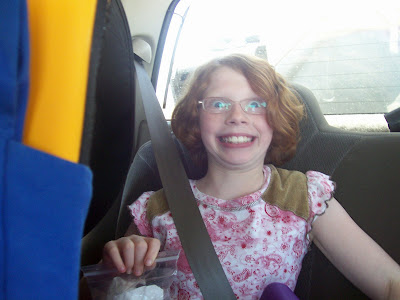 We made it pretty far before having to stop and get gas. I think we were not too far from Arizona before we had to get it. There was a pretty car to look at while we filled up and ate our sandwiches that Sarah had bought for us. I'll have to ask Scott what kind of car this is. 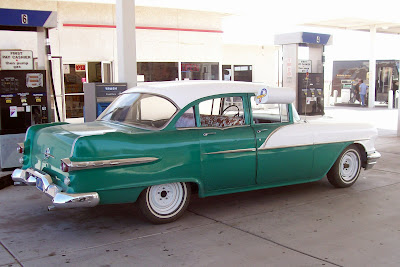 Thank God, FINALLY we have made it to Arizona.

Did you know that the "London Bridge" is in Arizona? It's actually really close to the California/Arizona border. Hmm we thought THIS was the London Bridge 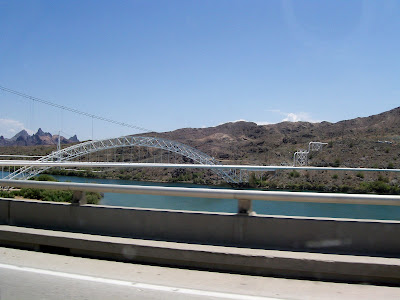 But it doesn't look like the the London Bridge here! The sign did say London Bridge though so maybe we were just not looking at the right thing??

Oh well! Obviously we didn't get out lol. Those are all "drive by" pictures. We did stop at the next off ramp though and go potty. When we got out of the truck it was HOT. Everyone in the gas station looked wilted. I got myself a milkshake and promptly got back in the air conditioned vehicle! 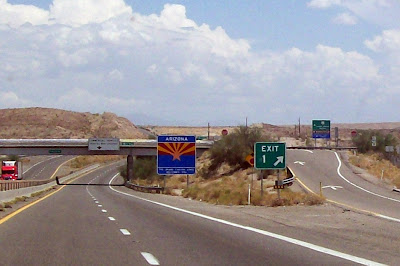 Back on the road again.. 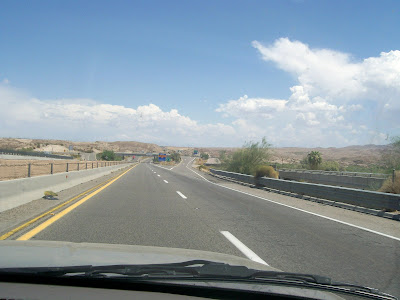 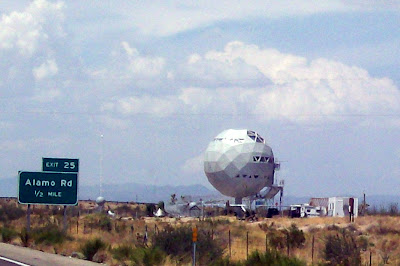 Hmmm not sure?? lol 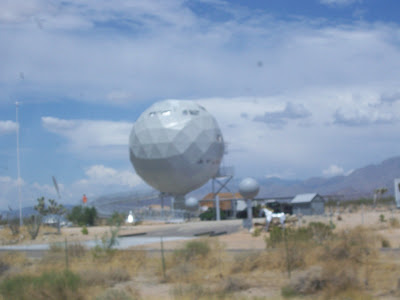 I think I'll stick my truck up on a big pole... 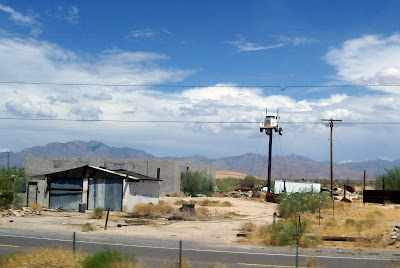 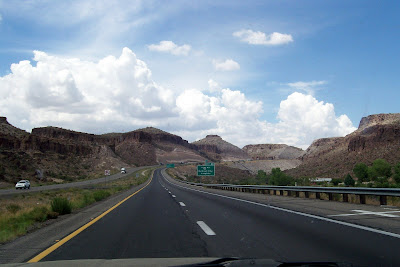 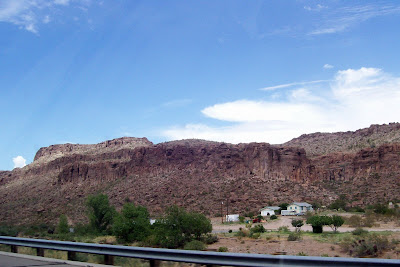 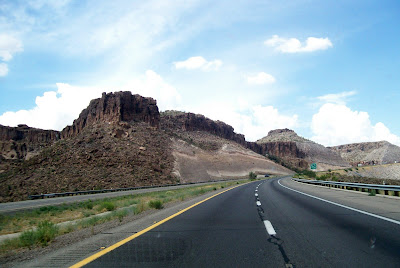 Oh man!! It's raining!! Sarah has her DYSON in the back of the truck! (Wonder if she ever did try that out to see if it worked lol) I said we should stop to get a tarp but I think I was out voted. 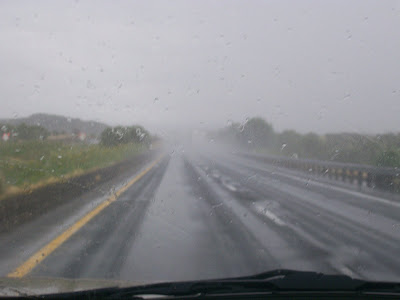 Ok I think this guy was either on crack or really poor or something??? There was like black trashbags lining the back windows. Hmmm ... 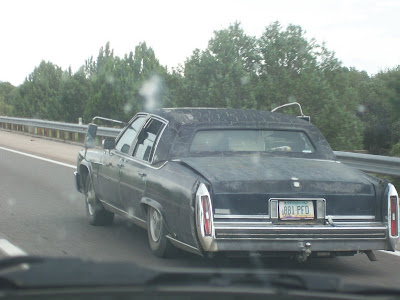 We finally made it to Williams, Arizona where Sarah had made us reservations at the Fairfield Inn. We had planned to go in the Hot Tub or swimming but since it was raining that idea was nixed real quick.

We dropped off our stuff in our room and then went to dinner at this nice Mexican Restaurant that is on Route 66. Sarah had done some research and knew this was the place to get a good margarita!! It was very yummy!! The food was great too. Sarah has some pictures of us inside, I'll get those later. 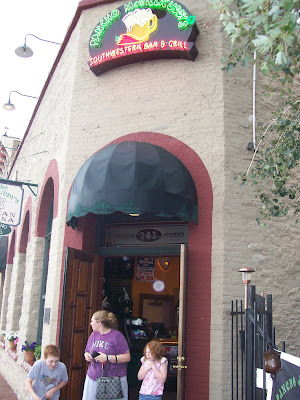 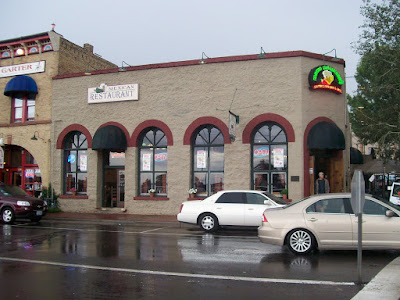 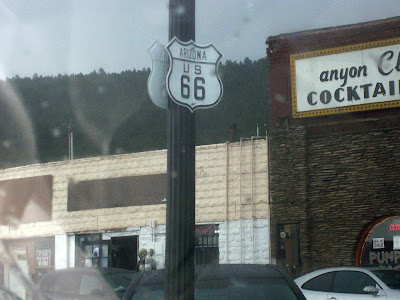 When we got back to the hotel room everyone was exhausted. I took a shower (eww mold in the bathroom!) Garret was sleeping on a roll away bed and Anneke was sleeping with Sarah and I had my own bed (SCORE!). I read my book for awhile then went to sleep (it was only around 6!).

All of a sudden I woke up when a kid jumped over me!

I look over and red headed child is sleeping. I was like Umm ok... Thinking to myself maybe Gerret got in bed with Sarah and then Anneke came in my bed (maybe thinking something is wrong with the roll away??))

Then I wake up a bit later with kid whacking me and it's HOT.

I get up and attempt to turn on the AC but just end up waking up Sarah. At about that point realized that it was Gerret! in my bed. Sarah said he sleep walks. I think he just wanted the better bed..

I decided to sleep on the roll a way bed after he whacked me about 12 more times.

Seriously, this was the most uncomfortable thing I've slept on. I could feel ever freaking spring.

Oh and did I mention that the people in the room up above us were doing jumping jacks or something?? I swear it sounded like they were freaking jumping off the bed onto the floor or something.

Luckily we got up nice and early the next morning!

I'll continute on tomorrow!Pin It
Posted by Julie H at 10:20 AM

You have some rather interesting photos there, I reckon that big ball on a pole is a huge golf ball.. maybe there's a gold course there! As for the truck on a pole, someone is a nutter for sure! Sleepwalking kids... no thanks! Roll away beds... even worse! I would have stayed with the kid.

Julie wow you had a good time until you got woken up by a kid. And people upstairs banging around. I hope you got on bed and banged on ceiling.