I'm so far behind on my blogging! I've been busy doing stuff that makes great blogging material but no time to blog.

Here's a run down on the last few days.

Wednesday went to grocery shopping and spent over $300 on one basket of groceries.
Then went to a friend's house for dinner to meet her Mom and Sister who were visting.

Thursday worked outside in the hedgerow at work.
Skipped Christian book club on Thursday since I was going to be gone all weekend.

Friday went to see Carlos Mencias
Saturday morning I got up early and left for a scrapbooking weekend.

Since that is the freshest in my mind I'll talk about that.

Saturday morning I got picked up around eight to go on a mini scrapbook retreat weekend. It's so nice to get picked up at your house and not have to drive.

WHICH reminds me that I forgot to give the driver some cash for gas. UGH.

I didn't eat any breakfast (HUGE MISTAKE) because I didn't know if we were planning on eating that morning or not. I knew we were going to Starbucks so I waited until then to drink any coffee. I started the morning with a Skinny Vanilla Latte.

We got to the scrapbook store where they were having a National Scrapbook Day crop and we had these nice things waiting for us.

A page kit, and some nice stuff in a little bag. I got a ton of free stuff while I was there. Several page kits & paper sets and three make and takes. 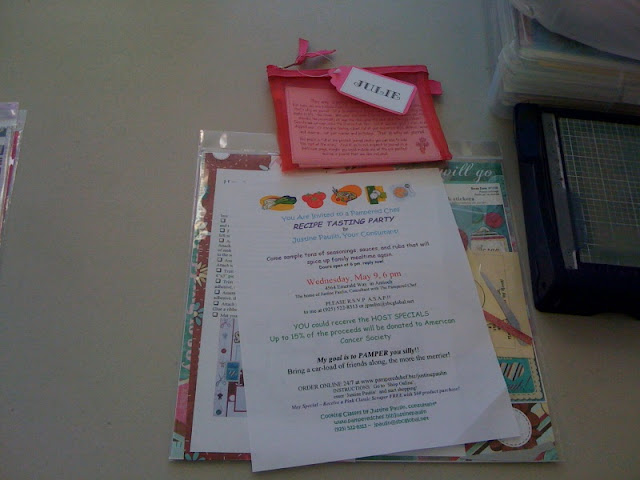 They had an order form for Togo's for lunch. I ordered a salad so I could stay on my calorie count. When the salad got there it had maybe a half a cup of chicken on it and about three cups of iceburg lettuce. Not quite what I was expecting. In hindsight I would have been better to just get a sandwich with more protein on it.

I pretty much felt like I was starving all day and ended up eating WAY too many snacks. It was like I just couldn't get rid of that starving feeling. Finally we had dinner around 7 or so. They had someone bring in some Mexican food from a restaurant in Berkely. It was soooo good and I ate a ton of chips and salsa (my favorite food group), beans, chicken and carne asada.

Do you love my picture from the photo props? 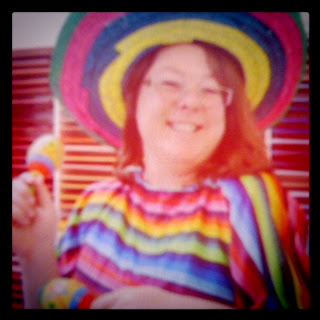 They took a ton of pictures but they aren't up on their website yet.

When we got back to the hotel we had cake for my friends birthday and some wine. I went over almost 1000 calories that day and felt like shit. I actually fell asleep while everyone was still up drinking and talking because I was so tired I just couldn't keep my eyes open anymore.

Sunday morning we got up and went to Denny's for breakfast like last time. I got the low cal skillet they have again and it was so good. I also ordered a side of fruit and ate someone else's fruit. I ususally eat several pieces a day and hadn't had any the day before and felt like I was really lacking it.

Lunch was from Kinder's and I ordered a sandwich and beans for my side. It was really good.

For dinner we went to Applebee's and I tried one of their 100 calorie margaritas. Good but no buzz. And $6.99 so not really worth it.

I had a Weight Watcher's Steak for dinner. It was really good and I was stuffed for the rest of the night. Only 500 calories or so over for Sunday.

I was seriously scared to step on the scale this morning. Up 2.4 pounds. Hopefully it won't take too long to get rid of that.  Next time we go I'm taking a little ice chest with some "alternative" meals just in case!Pin It
Posted by Julie H at 10:08 AM

How was the Carlos Mencia show?
used to like his tv show.

Sounds like lots of fun! You are so good at sticking to a healthy meal plan while out and about.

I hear ya...I feel like every weekend I am indulging! But you have done so well so far...don't let it set you back!

And I say when you are more busy living than blogging...it's usually a good thing!