Last night after eating some pasta for dinner I was sitting at the table and my friend sent me this: 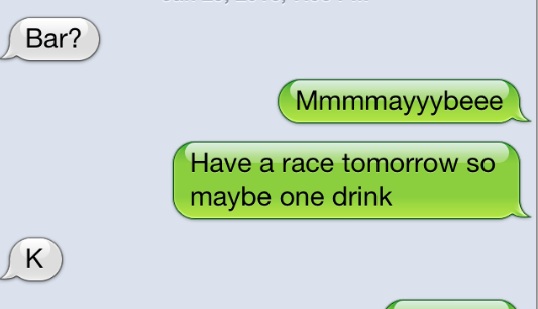 We hardly ever get to hang out anymore so I was happy that she wanted to. Kind of appropriate that I saw this on the fit camp right before going in the bar (I was waiting for her in the car). 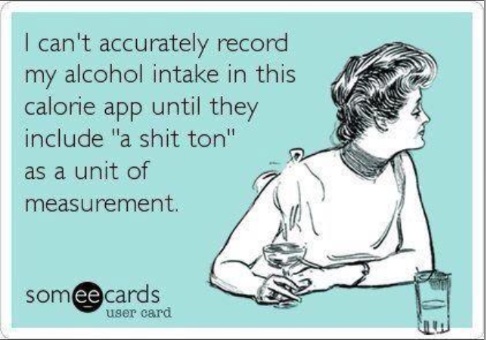 So that one drink turned into like 4 or maybe 5?  Not quite sure on how many times that wine glass got refilled. 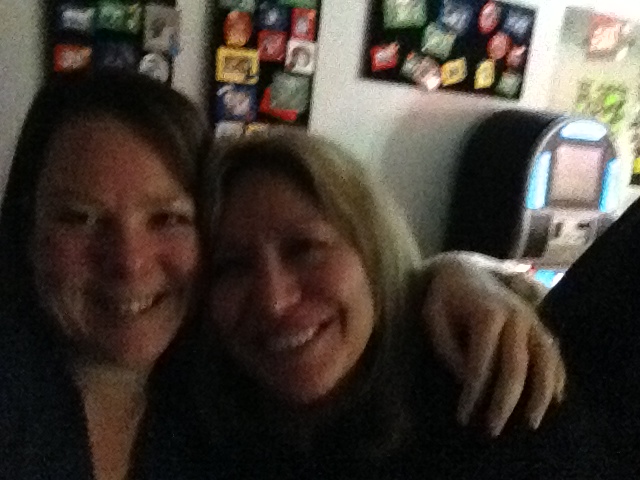 I'm also not quite sure who is the bad influence. I'm thinking it's her, she says it's me...

On a side note, see those lines on my face by my mouth? NEW WRINKLES. What.The.Hell. One good thing about being fat (nothing really) but the fat pushes out the wrinkles. I have noticed my face is thinning out more but I could go without those that's for sure.

So after I got home I just laid down on my bed with all my clothes on. I woke up at 2:30 with a headache and half naked from stripping my clothes off in the middle of the night. I got up and took some Advil and drank a bottle of water and told myself how stupid I was.

Then I went back to bed for about two more hours and got up and hung out with Lucy while I tried to fill myself up with as much water and coffee as I could handle. 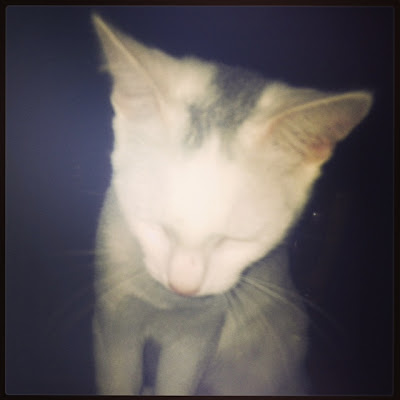 This is about how I felt haha

After I got myself re-hydrated I felt a lot better. Note to self, don't drink the night before a race. Or, you know, just stick to that one glass!

Scott drove us to the race, which was in Modesto.  There was fog hanging just over the fields but not too bad. 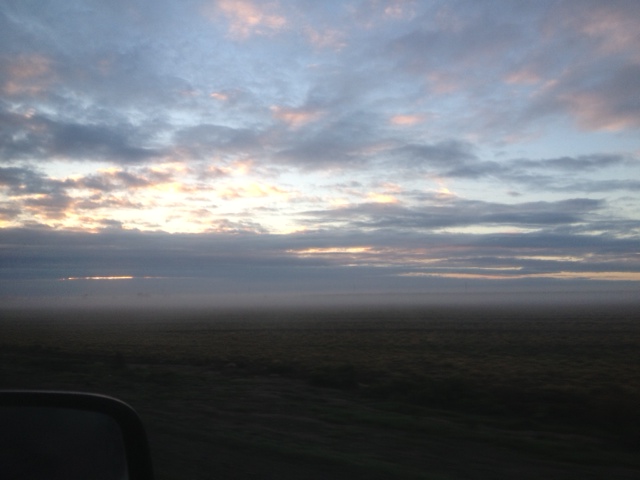 My friend Eric signed up for the race for his first 5k. He ended up rocking it and getting 1st place for his age group with the men. Nice way to start off your running! 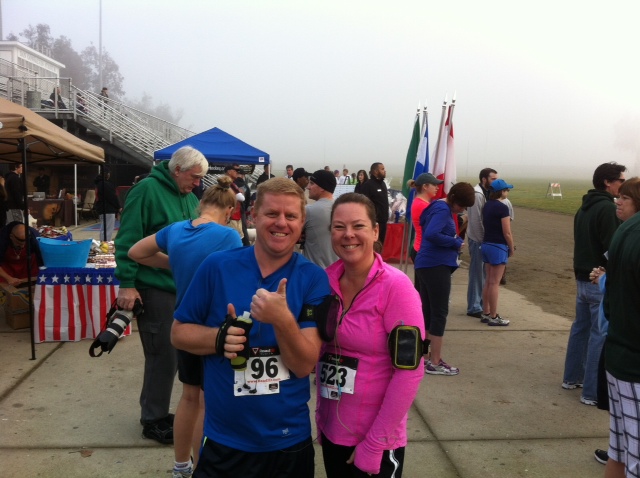 check out me and Eric (and another friend) back in June. We've come a long way!! 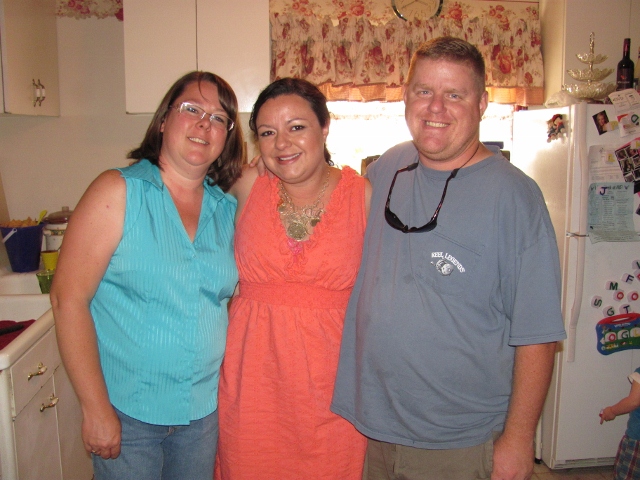 I used to give him shit about bringing his "bag o'crap" for breakfast every morning. Then he started doing Lose It with me and look at him now!

Eric was already turned around and heading back before I got to the turn around point. Fun to see him on this way back! 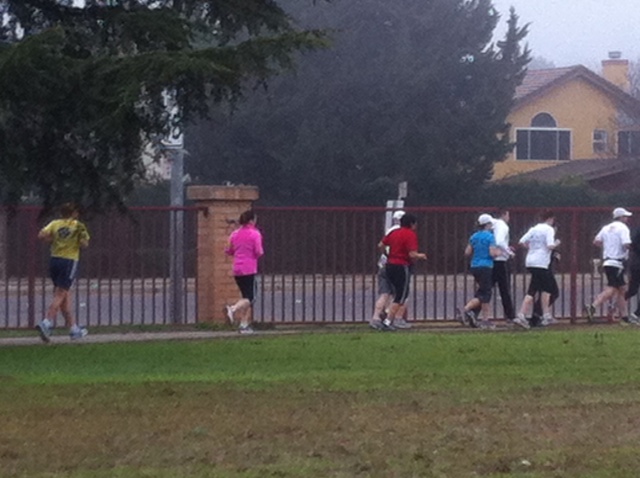 The race went along Dry Creek Trail, which I have heard about but never actually been on. It's really nice! It was open to the public during the race though and I thought I was going to get killed by a bike whizzing past me at one point.

I didn't bring any water, expecting there to be water stations but there wasn't. That is until more than half way back where someone was handing out full water bottles. I took a sip put the lid on and tossed it at the next volunteer. Didn't really want to carry that around.

I didn't take any pictures along the trail, I'll go back there some time and take some, it was really pretty.

I think I'm going to invest in some of those arm warmer things. I'm always cold when we start but get really hot. I am getting good at stripping my shirt off while running though. I had to pause for a sec to repin my bib though.

Scott got this one of me headed back in at almost the same spot. 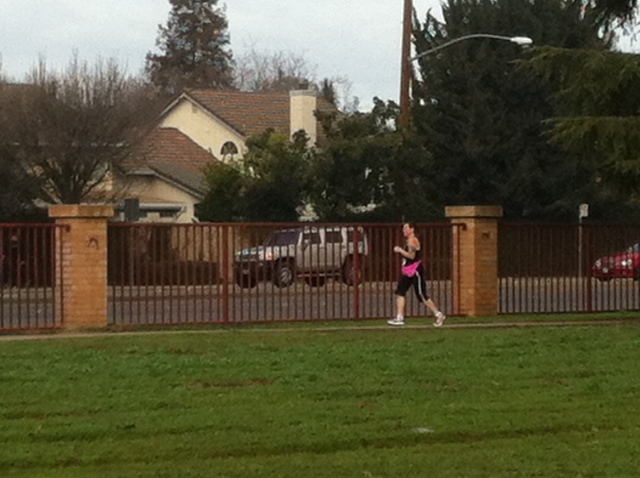 I had quite a few people say nice encouraging things to me as they passed me on the trail.

"10k's not for the weak" was my favorite. People are so awesome when they say nice things like that. Although judging from this picture I did look like death so maybe they thought I needed it haha. 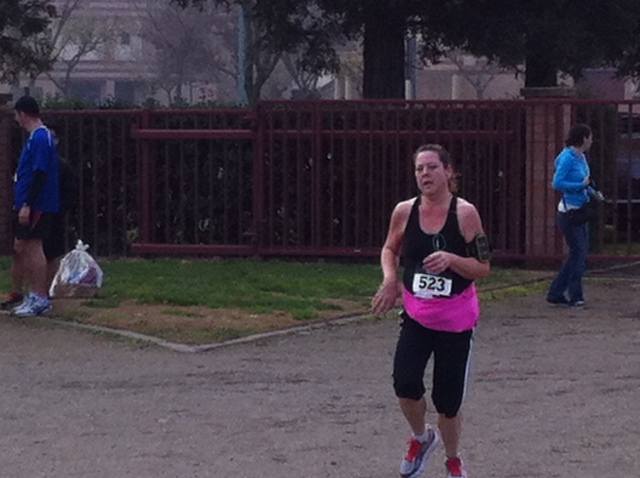 I told Scott I need to work on that limp wrist thing there. I get caught doing that in pictures a lot.

The race finish wasn't too fancy but it was at the high school track. I couldn't help but think of all those times running in school where I felt like such a loser being in the back of the pack (and I wasn't fat back then) on the track. I actually went out for track in high school. I wanted to do sprints but ended up doing shot put and discus. That sucked and looking back I think that was kind of shitty.

Anyhow, Scott got a pic of me coming in with the clock, cool! 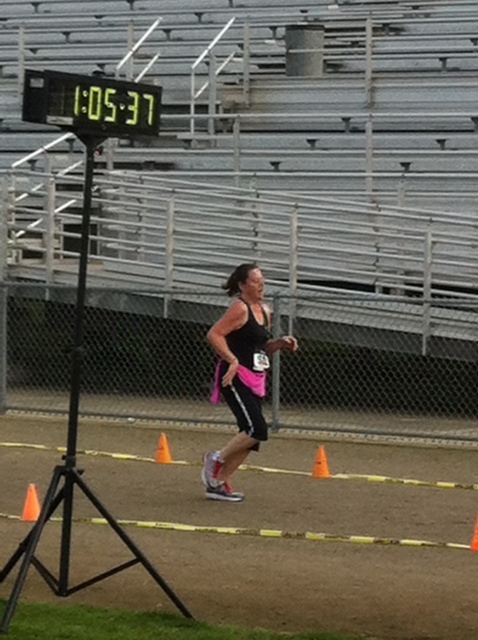 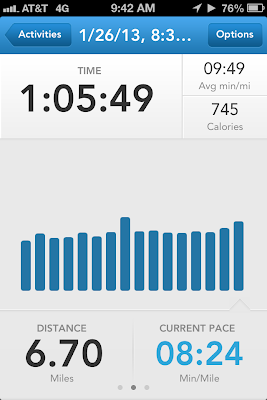 and I still beat my time on the last one I did by a couple minutes. SCORE!

Scott and I went to Denny's on the way home (shhh don't tell the kids). I got a Sausage Slam. I asked if they could sub bacon for the sausage but the waitress told me no. WTH? I think they need to come up with a Bacon Slam.

The eggs are buried in between the pancakes. It was heaven but I only ate about half before I was stuffed. 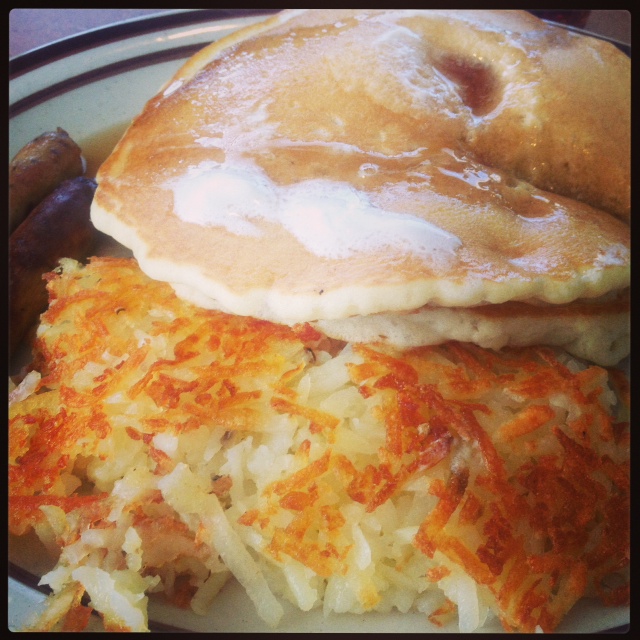 I was glad when I could finally take my shoes off. I have some pretty blisters. I need to invest in some better socks I'm thinking! 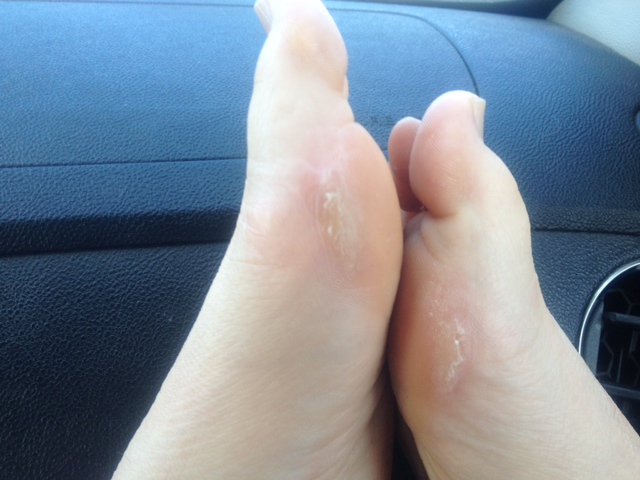 AAAAh-MAZING. You run with a hangover...and STILL kick butt. I don't see you slowing down long enough for me to catch up either! Way to go Eric! Winning on first 5k! WHOOP!!