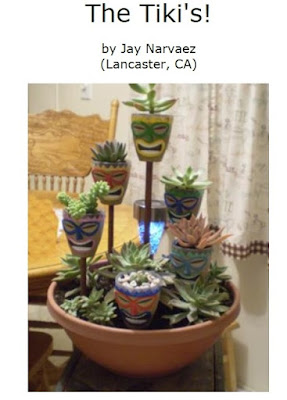 A painter I am not, but I thought it was so cute I had to give it a whirl. I went out in search of little terracotta pots and found some small ones at Wal-Mart. I also got the small succulents there for about $3 each. I think if I would have found some pots that had holes in the bottom it would have been better but I went to several stores and couldn't find any (probably because we are out of season now).

I started by looking at some tiki pictures and kind of sketching them onto the pots. 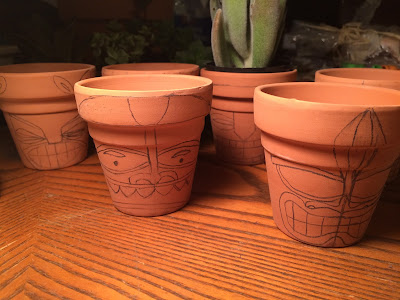 Then I borrowed my friends pants and brushes and got to work! Melissa mostly painted the one on the far right, I just added a bit more to it. 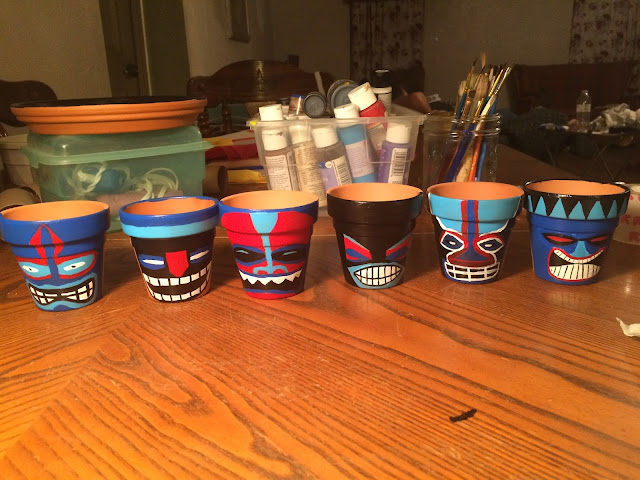 I had bought a bag of dowels and asked Scott to cut them in various lengths for me and then I painted them with some brown paint and glued them to the bottom of the pots with some E6000 glue. I wish I would have been more patient with the glue and added a bit extra (and if there was a hole in the bottom of the pot it would have went in and been able to be more sturdy).

I had bought some clear sealer and when I sprayed it on the pots it make them look a bit weathered on the unpainted parts but that was ok, I still liked the way it looked. I had painted the top part of the bigger pot and the inside part of the tray black and then just added some twine. I filled the pot with some potting soil and then added a bunch of rocks I had bought before but never got around to using. 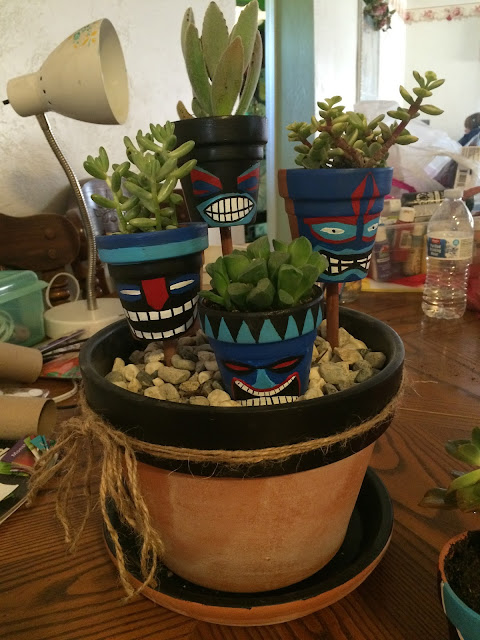 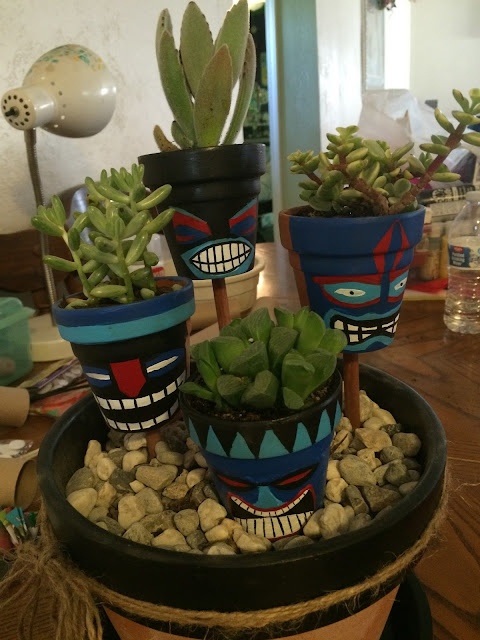 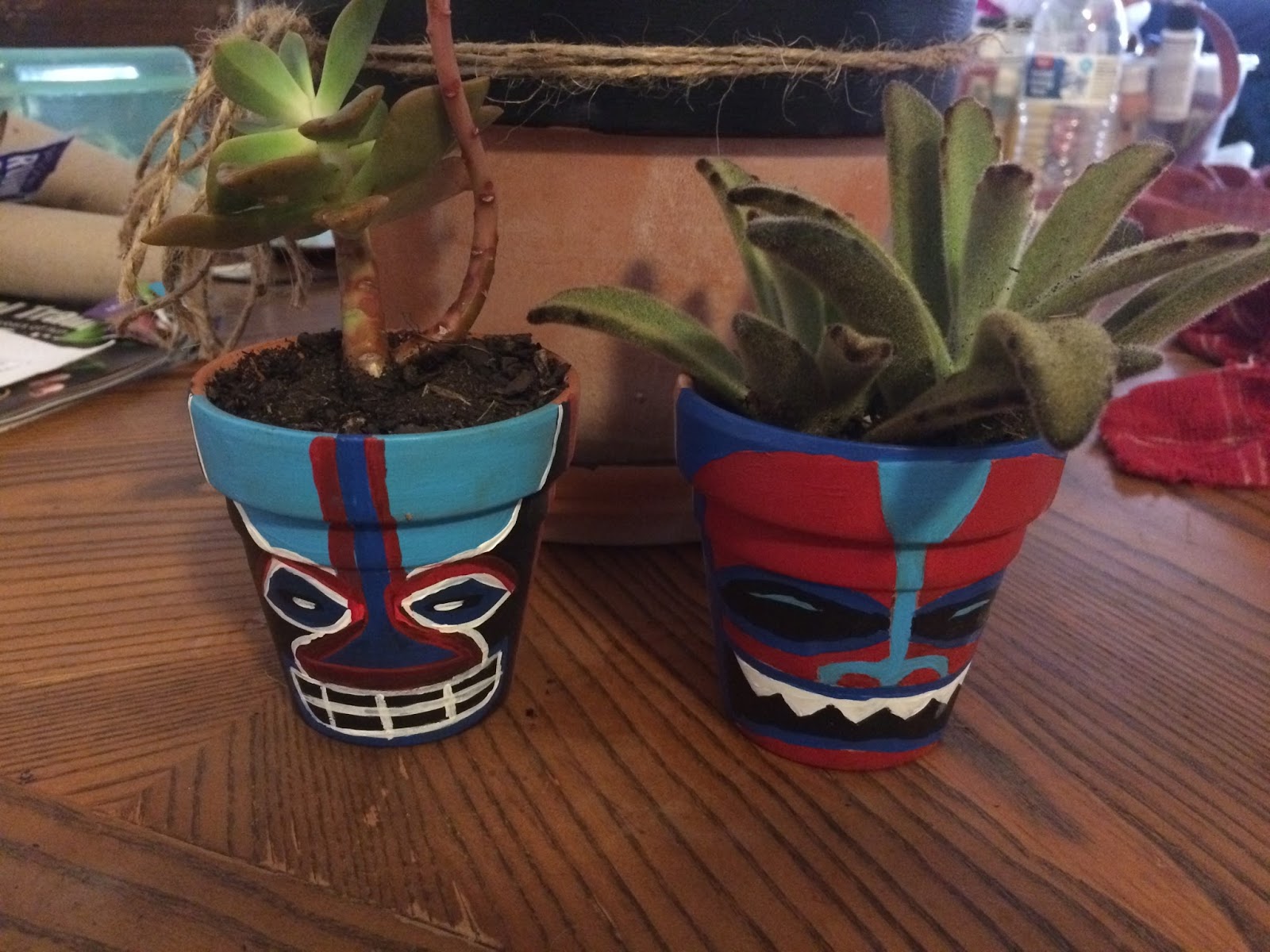 The day of the party one of them was pretty wobbly so I decided to just take it off the dowel. 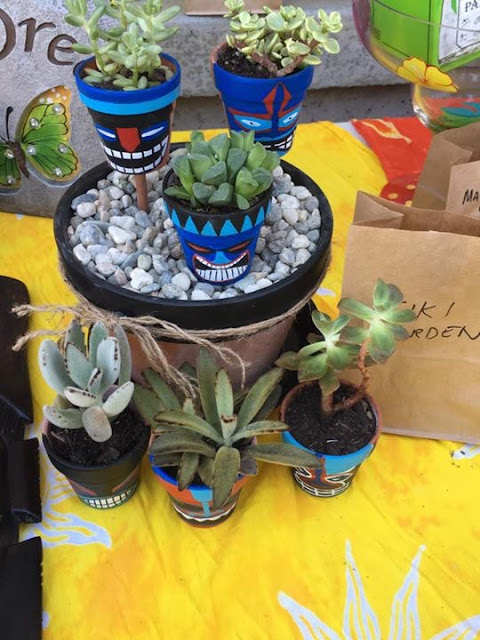 I learned a few things while making these but I think they turned out pretty cute. I was worried that no one would put their raffle tickets in for them but they had quite a few in the drawing. Someone even told me if I find some old pots on my porch I can paint them up and bring them to their house ;)

Love all your party decorations. What a cute idea. I might have to copy you on this one!

Great job Julie. I wish I was that talented.