Good morning happy Saturday! I fell asleep last night and woke up at like 11 thinking it was a new day. Sheesh haven't slept that sound in a long time lol. Of course then the dogs wanted to go out so I had to freeze while Rusty pooped. Amazingly I went back to sleep and slept good again until this morning.

Yesterday I wanted to leave Scott's moms a bit early so I had time to go home and get ready for darts. She decided a sandwich would be ok for dinner. While I was making her sandwich she says "I wonder where Suzie went and why no one will tell me, I keep asking". I was like Good God did she really forget that she died? I was kind of like shit what do I say I don't want to get her upset, I'm trying to leave. Then she said I still hear her saying "I love you mom". I was like oh I hear her too. And that was that.

I'm like is this dementia or did she have a little stroke or something. Is her brain just trying to protect her? It's like 50 first dates where she just lives the same day every day. It's a hard thing for me to process.

I sent Scott a text and asked him to ask his brother to come over for a bit since I was leaving around 5 and Scott wouldn't be there until around 9. That was a big chunk of time to leave her alone when she can't even remember what happened. Apparently his brother went over there but by 7 was asking Scott when he was going to be at his mom's house. Like Jesus can you not just hang out in the shop outside or something for a few hours? I'd hate for you to have to do something.

Here are my finished yo-yo's from yesterday. 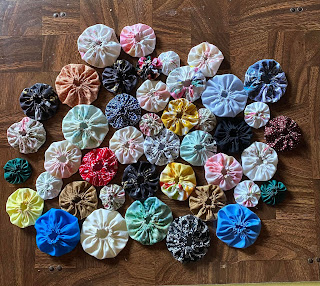 I was telling my mom it's my new goal (always have some kind of weird goal lmao) to finish up all these ones I have cut out. I'm pretty sure I cut some of these more than 20 years ago. There are some prints that were Scott's cotton pants he wore in the 90's. I got all the small ones that were cut out done now just to finish up the large ones. 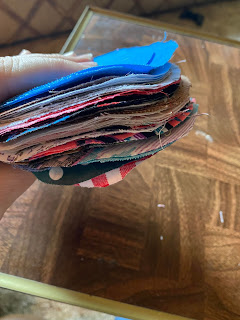 I hit In and Out for dinner last night. I had been craving this ALL DAY. I ate the fries too. Only went a tiny bit over on my calories because I ate a small piece of depression apple pie when I got home too. 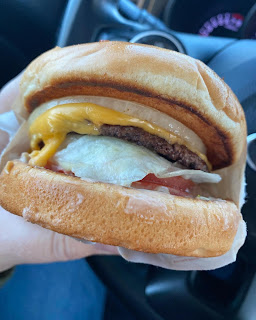 Darts was fun since we played my friend Sheryl's team. I'm friends with the other gals on the team too but really only like Sheryl enough to hang out with her lol. While we were playing she asked me to make her some coasters for her house and then I showed her my Etsy site. She was like I didn't know you were so professional haha. She picked a set of the St Patrick's ones I made to go along with the ones she wants to match her living room. She's not in a hurry so I can just make them when I get some time to unwind a bit.
It is fun having the kids on our team now. We were tied up until the last final 501 game and we lost by like 2 points lol. Oh well it was fun!

The woman who is in charge of our home internet is an idiot. I keep getting a bill with last months charges and I'm like I paid that through bill pay did you get it? She's like oh I don't know I've been working from home and haven't got the checks. I tried to go online to their website to pay the new charges and I don't think I ever had a log in and there is no where to make one so I just made the new payment through bill pay also. I emailed her response to the "I haven't got the checks" that I've now paid the next one and it will go out the 11th. She responds with did you pay the last one? Yeah she needs more coffee apparently.

I need to get some laundry started in a minute. Maybe I'll shlump the Christmas boxes out while I'm in and out too haha. I got one round of dishes done (I'm a weirdo and have to sort EVERYTHING to do anything, I annoy myself sometimes). Trevor washed a bunch of dishes the other day but all the plastic containers were greasy so I have to rewash those before I put them away. He tried I guess lol. When ever Scott or Trevor do the dishes they turn the dish drainer and take out the plate I have on the ends so things don't fall out of it. I have told them to LEAVE THE PLATE THERE so many times that now I think they just take it out to F with me. Last time I told Scott if he wants to do the dishes EVERY TIME he can take the plate out and do it the way he wants. No comment haha.

Bile salts update. I took one yesterday morning and one before bed and either I'm hallucinating or my stomach is less bloated. Could be either at this point but I actually just have some loose skin that's not all filled up so that is good but gross lol. The directions say you can take it three times a day so I'm going to give that a try. I'm horrible at doing anything three times a day so we'll see.  So far the only downfall is I feel more thirsty after I take it.

I might have to start saving for a tummy tuck. I told myself if I ever lost all my weight again I would do that for myself. We'll see if I still feel that way. My stomach area has been the hardest thing for me for my whole life. Even when I could wear a size two people asked me if I was pregnant (more than when I was fat, so that was not very nice).  I'm assuming I'll look like a pregnant Grandma now which doesn't sound too exciting. Although now I hardly go anywhere so does it matter? Apparently we'll be going back to work 2 days a week sometime between March and May though so maybe life will pick up again.

Ok time for another cup of coffee! I guess I'll run out and get the washer started too. Yee haw!

If you told you MIL that Susy passed do you think it would come back to her? It's all so sad. These bile salts sound interesting. I'd love to feel less bloated. But I'd also like to be 5'6" and 40.😀

@Peg, we've noticed she gets worse as the day goes on and then things are in and out. Doesn't seem like it will do any good to get her upset when she'll probably forget again later.