Good morning happy Thursday! I made it to MIL's house before my alarm even went off to get up (I need to actually make that for earlier now anyways since I can't just log on to work in 5 minutes lol).

Yesterday was a busy day. I found this big box of picture in their envelopes from being developed and 90% of them are my kids. How fun!

Here is one of the ones not of my kids but of my husband. His parents look so cute. His mom was 40 when she had him and I think his dad was 42. 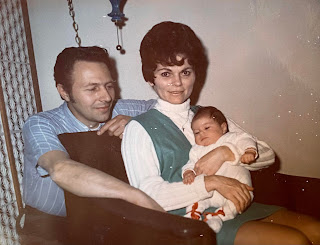 There are several really nice pictures of his sister Suzie who just passed away. Here she is with baby Melissa & Jess (5 years old) 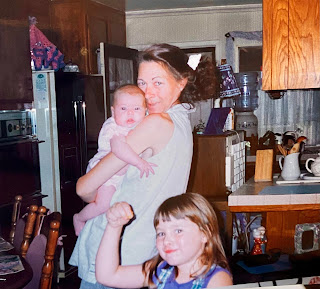 With Scott, I can see Trevor in this picture of his dad. I'm not sure where this is at, I THINK it might be a wedding for Scott's friend. His parents hardly ever went out to eat anywhere. 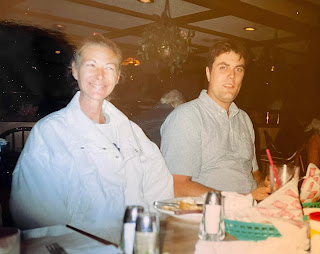 Baby Melissa with Grandpa. I'm pretty sure we had taken away the bottles but Grandma had one at her house... lol 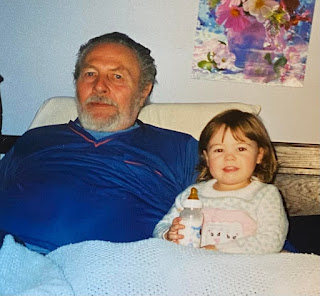 She broke her leg when she was tiny by standing on the back of the stroller. It tipped back and the basket got her in the leg :( 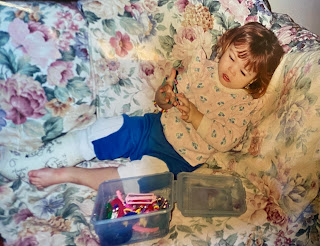 with Scott's mom. There are tons more, I was crying looking through them I'm such a sap lately. 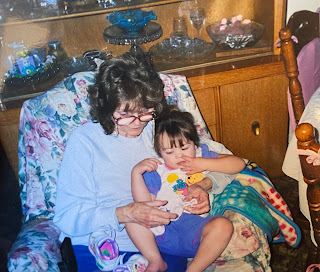 Jess came over in the late afternoon and cleaned the bathroom. I was helping and went to clean the shelves behind the toilet and had streaks going down he wall so ended up cleaning a portion. This my friends is why you should not smoke. And definitely don't smoke in the house. Going to have to finish that wall at some point (and the rest of them). Ick. I took down the shower curtain since no one takes an actual shower in there (there is only a handheld shower head way too low). Not sure if I'll put the lace one back up or not, I have it by the washer at the moment. It's gives more space for bathing without it. 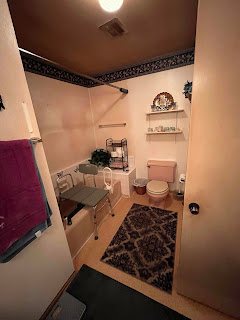 After Jess got done cleaning that she vacuumed and took one of those duster things to the rest of the house. I wish I had that much energy lol. I still have dust particles in my nose, so gross. Eventually things will be clean here I guess!
Funny story yesterday. This chair popped up on our neighborhood site for free (It's a Lazy Boy) and I was like oh that's a nicer chair than those huge recliners we have. I told Trevor to go get it. I guess right after that Jess asked if she could use Trevor's truck to go get it for herself. So funny. So now it is Jessica's. Darling little model ;) 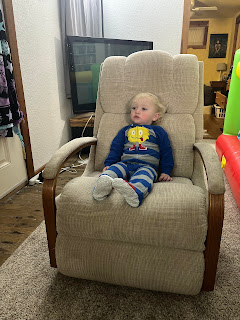 Today Scott is going to try and get home earlier around 6 so I can go watch the little one while Jessica goes to work. She's been having Daniel's sisters watch him but we need to spread it around so we don't wear them out haha. They are still in high school and don't have their own cars/driver's license to be able to drive out either so it's 2 more trips to town for them to babysit. Jess mostly just works 3 days around the weekend. I haven't seen him in like two weeks so looking forward to some snuggles :)
Well that's it for this morning. Only one work email so far, I think I'm up before everyone else ;)
Pin It
Posted by Julie H at 8:25 AM

Those pictures are precious. So glad I quit smoking years ago, disgusting habit. Shower curtains are a nuisance if no one takes regular showers, bathroom looks spacious without it. So sorry about your MIL. Molly in Michigan

Great pics. I love going thru old photos. It's sad that kids today won't have them. "Here look at my phone"....not the same ya know?