I couldn't sleep this morning. I was laying there for about an hour and then decided to just get up. We had Chinese food for dinner last night and my poor tummy was not happy.

The Chinese food restaurant we go to is called Lee's. We've been going to the same restaurant since Jessica was a little thing in a high chair. These days we get it to go most of the time but last night we actually went in.

Lee was working and she was all excited to see us. It was kind of funny. We got that "NORM!!" feeling. Then I started thinking um maybe we eat too much chinese food lol.

Anyhow, so I got up early, played some http://www.winster.com/ and started working on a bunch of scrapbook stuff I have here to sell for my friend. Got most of it listed on my sale board I go on to. Hopefully the bulk of it will sell so I won't have to put too much on eBay. Less fees=more profit.

So I made french toast today. We usually throw away the heels of the bread (I know, SO wasteful!) A while back I got the idea of saving up all the heels in a bread bag in the freezer for french toast. I used up all the ones I had saved this morning and it turned out just fine! It was about 1/2 a loaf of bread's worth too. So basically it was breakfast for free :O) Gotta love being frugal.

Scott is down at the water machine filling up our water bottles. Another thing I am doing to try and save money. We used to do it all the time and then somehow fell off the habit and just started buying water at the grocery store. When you live in California you are paying quite a bit in California Redemption Value. We recycle but they don't give you back what you paid at the store. (Which was shock to me to realize the first time we took it all in!) So I've been washing up our bottles and refilling them. Works just fine for us for now. Maybe some day we will switch to non-plastic disposable bottles but so far all the ones we've tried leak all over.

Yesterday I went to Melissa and Trevor's school carnival. I had signed up to work an hour in each of their class booths. Melissa's class had a Dance Dance Revolution Booth. Unfortunately they put it way far away from all the other booths (I think for power cord issues). While I was sitting there I maybe got 5 kids in 1/2 an hour. Luckily all but one knew how to work the program because I was clueless. I leave that kind of stuff for the kids to figure out l0l. Someone came and relieved me after 1/2 an hour so I got out early on that one. Trevor's class was doing the cake walk, which is what the K class does every year. There weren't that many people playing so I fudged the rules a bit since there was a huge box of cupcakes to pass out. Always a winner when I'm running things!! ;O)

The school always does a live auction and we were sitting there for awhile enjoying some nachos. Someone paid $300 for 4 first row seats at the 8th grade graduation. Nuts I tell you!! I kind of don't think that's fair too since the people that don't have a lot of money can't sit in the front row that way. Well you could get there early and camp out but that's not any fun.

They also auctioned off 4 old chairs that they use in the gym for events. They are old wooden folding chairs and have the school name stenciled on them. They went for $250. For 4 chairs. I think they can buy some new chairs with that, what do you think?

Now to find something else to do today. Yesterday I cleaned most of my bedroom. Everything is just about clean around here now. I COULD go out and work on the recycling but that doesn't really sound fun at the moment lol.

A little funny for you 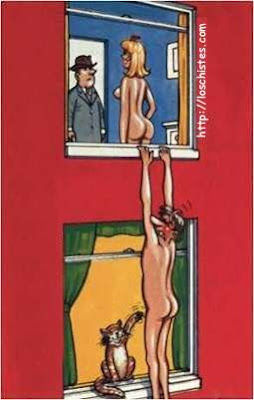 Uh...I remember stumbling across some of my dad's Hustle Humor magazines when I was younger. This one reminds me of those comics.
Thanks for the memories!

I miss kid carnivals. My youngest is the only one in elementary and I hope his school has a carnival!

LOL at the cartoon. I noticed your cuss o meter is going down LOL!!

You could come over here and clean my house, it's disgusting. Come on, you know you want to, it's not like you'd have to go to another state or anything :)