Back To Work & Christian Book Club

Tuesday I dragggggged myself out of bed for work. Seriously thought I wouldn't have as much of a problem getting out of bed with the time change thing going on, but of course, that wasn't the case. Sleep is something I seem to never get enough of!!

So work was pretty boring (as expected!)

That evening I had a book club meeting. Did I tell you guys I'm doing two book clubs now? This is the Christian book club that meets at Starbucks. Which in itself is a reason to go. Nevermind the fact that my oldest friend, her sister and her mom go too! My friend's mom and my mom have been friends since 5th grade. So obviously they hung out when we were kids and I was pretty much an only child until my brother was born when I was 7. There were FOUR kids in their family so it was like going to a party at their house. GREAT times. Anyhow, when my friend invited me to join her book club I was pretty happy!

The book we were discussing this time was

The Queen of Sleepy Eye by Patti Hill 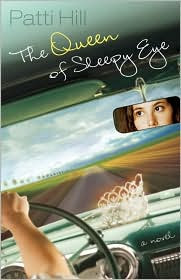 En route to college in the summer of 1975, sensible seventeen-year-old Amy gets stuck in smalltown Colorado when the 1958 Pontiac Bonneville Sports Coupe driven by her insufferable tiara-toting mom, Francie—former Queen of the Sleepy Eye, Minnesota, Corn Festival—surrenders to a mortally wounded transmission.

It doesn’t take long to realize that thirty-three-year-old Francie is out of money and in no hurry to let go of her daughter, so the two unpack indefinitely. Amy finds work at a funeral home, a place where her unlikely Christian faith can work itself out among the town’s young and old, geeks and jocks, hippies and clergy alike.

Trying not to judge her mom’s serial boyfriend escapades, Amy ends up in a tragic love triangle herself which gives both mother and daughter the chance to do some real growing up. But in a surprise twist, their road to healing still has many miles to go in 2008 as they travel back to Sleepy Eye in that old ’58 coupe.

I really liked this book, although I did a little vent (spoiler) HERE when I first finished it. Except for that one part it was a VERY good book.

The next book that we are reading is Any Minute by Joyce Meyer.

I got this as an audio book from Paper Back Swap awhile back.

This was the first audio book I've ever listened to! It was almost exactly one cd to work and back so it only took me a week to listen to it. I felt a bit like a cheater since I've already listened to the whole book and no one else has read it yet lol.

Product Description
Sarah Harper is driven to achieve success no matter what the cost. She wants to do good and not hurt the people she loves--especially children and her husband, Joe--but her desire to succeed in her career too often leaves little time for family.
One cold, autumn afternoon, all of that changes when Sarah's car plunges off a bridge and into a river. She is presumed dead by those on the "outside," but Sarah's spirit is still very much alive. What she discovers on the other side transforms everything about Sarah's view of life--past, present, and future.
When Sarah is revived, she is a changed woman. And the unsuspecting world around her will never be the same again.

I loaned my audio book to my friend's mom. She never seems to get the books read so we'll see if she can get this one "listened to"! If she brings it back to me at the next meeting I'll put it up here.Pin It
Posted by Julie H at 8:13 PM

Christians in a Starbucks....why does that sound like the start of a bad joke lol.

I have yet to read any books. I don't know why my logic of finishing school and finally working would be much easier...LIES! ALL LIES!

Hello !.
You re, I guess , probably curious to know how one can collect a huge starting capital .
There is no need to invest much at first. You may start to get income with as small sum of money as 20-100 dollars.

AimTrust is what you need
The firm incorporates an offshore structure with advanced asset management technologies in production and delivery of pipes for oil and gas.

Its head office is in Panama with affiliates everywhere: In USA, Canada, Cyprus.
Do you want to become really rich in short time?
That`s your chance That`s what you really need!

I feel good, I began to take up real money with the help of this company,
and I invite you to do the same. It`s all about how to select a correct partner utilizes your money in a right way - that`s AimTrust!.
I earn US$2,000 per day, and what I started with was a funny sum of 500 bucks!
It`s easy to start , just click this link http://fuwuwufysu.1accesshost.com/qylehyz.html
and go! Let`s take our chance together to feel the smell of real money