Saturday I woke up and I was alone in the house with Gerret, Sarah's son. I called Sarah and told her to come get me. Her friend Blou was having a garage sale and everyone was going to go hang out there. She said she was at the coffee shop and that Gerret would walk me over to Blou's house.

Gerret walks (more like sprints) me over to Blou's house. I'm wearing a tank top and my flip flops. One block in I'm thinking I really should have worn a sweatshirt!! We get there and none of the other girls are there?? Blou is busy running the garage sale. So I just kind of hang back and visit in between customers.

So this hispanic man picks up this baby doll and tells his friend that "this is one ugly doll" in spanish. Blou says "I know what you just said!"

You should have seen the guy's face, it was so funny! Everyone started laughing. So a little while later he's done shopping and his total is $9 and she tells him he needs to round it up to $10. So he's looking around and goes and picks up the ugly doll. Her hair kind of falls off (think it was glued on) and Blou says "she's having chemo right now". LOL, she cracks me up. So the guy buys the ugly doll and all is good. That's Texas for you!!

Here's Blou's cat "Bunny Rabbit" she said he used to stand up on his hind legs all the time. He's so flipping cute!! Made me miss my kitties though! 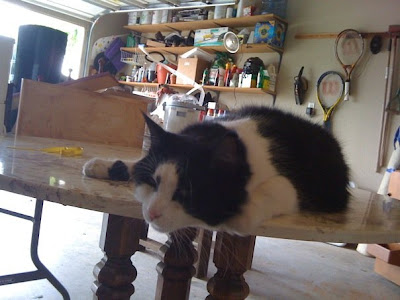 After awhile I walked back to Sarah's house since she told me on the phone she was "learning to run the coffee shop". I think she was just rubbing herself all over the espresso machine. ;o) I read my book a bit and Sarah came back awhile later all hopped up on caffine. WILL WORK FOR COFFEE tattooed on her forehead!!

So THEN it was field trip time!! 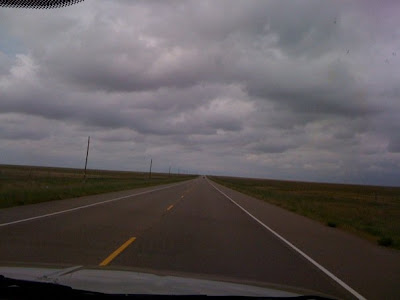 We went out to the their dairy 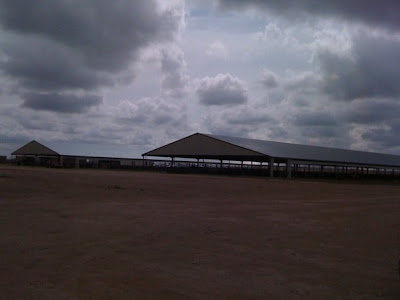 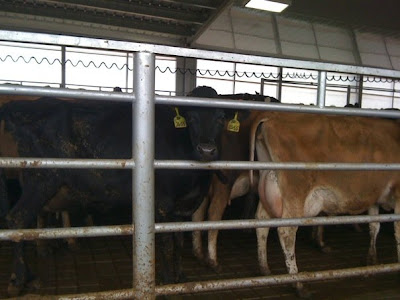 I swear the cows are SO CURIOUS!!

Then we went for a ride to the Oklahoma border, which is only about 10 miles away from the dairy site. 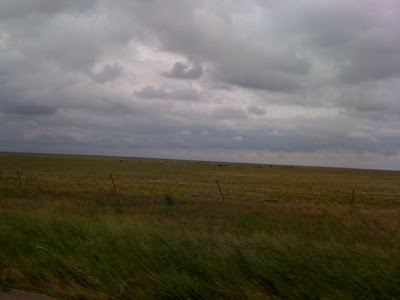 Made it!! Sarah was freaking me out about snakes.. At least I can say I've been to Oklahoma now (looks just like Texas, go figure...) 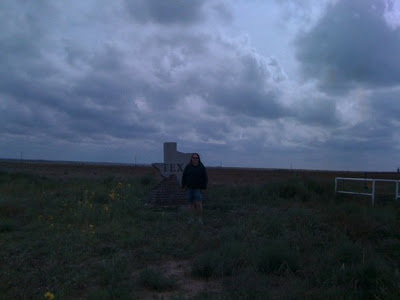 Finally got to see one of those "big spiders" she kept seeing. Tarantula anyone??? They cross the road all over, we saw a few more after this one. 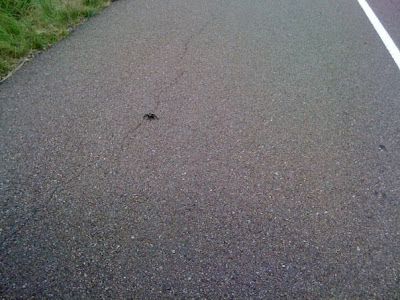 This is a little turtle, we saw 4 on our road trip. 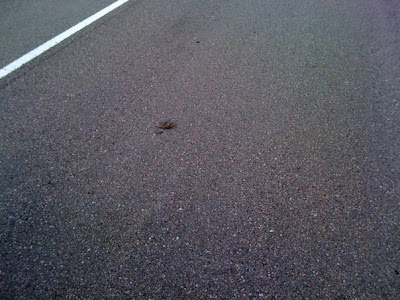 This picture is like "where's waldo" only it's a HUGE Antelope Buck. Too bad I didn't have a camera with zoom with me, just my little iPhone. 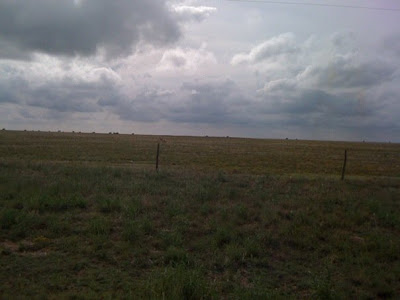 This is the calf ranch I think it was called. Something like that. All the dairies send all the baby cows to this place to be raised until they are milking age. Rows and rows and rows of baby cows. 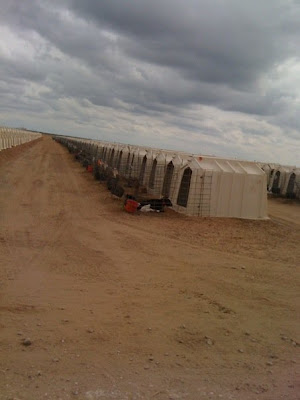 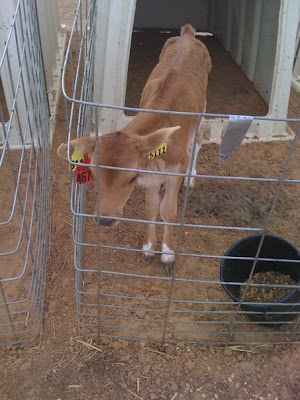 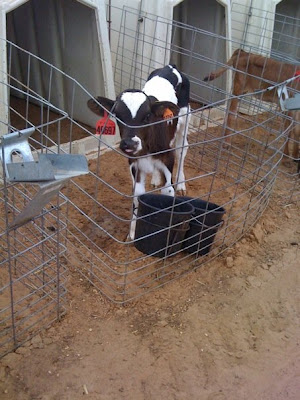 When we were leaving the calf ranch we saw a snake on the road. Ewwwwww. It appears to be a rattler that is missing it's rattle. Sarah thought maybe it had gotten run over earlier (but it was still alive) 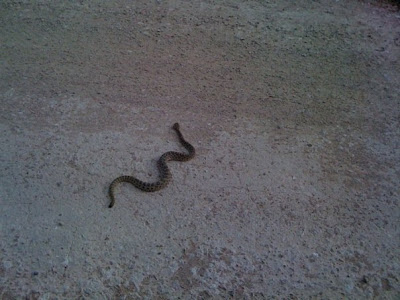 After we got back to town we went looking for the house that is for sale that I always drool over online. It's my house that I would buy if I ever moved there! 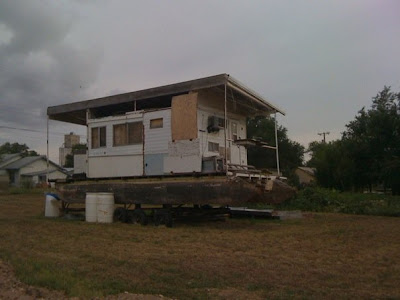 Here is the real one! Isn't it an awesome house?? It's only like $100K which is nothing here in CA! 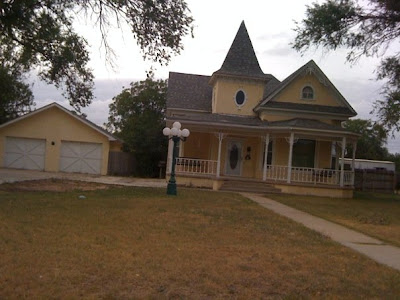 Too bad this is the main shopping area. I don't think Jess would go for it. 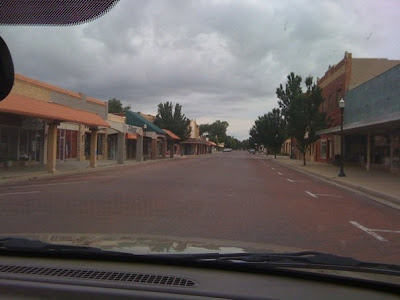 That night we went over to Lisa's house (the coffee lady) and hung out a bit. When we went to leave there were a couple of frogs/toads on her porch. 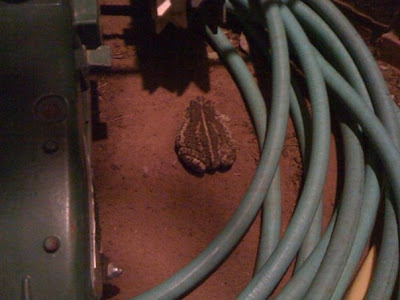 AND THEN on the way home we stopped by this guy's shop to see if he had the part for Sarah's refridgerator that has been held ransom for at least a month. They didn't have the part but they did have this awesome bird "Gracie". 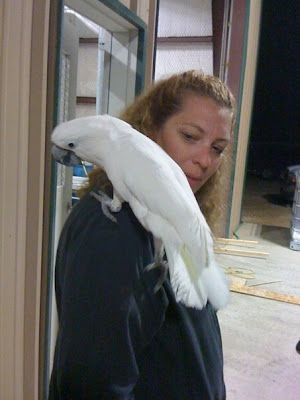 Gracie loved me and had to be practically spanked to get her back in the cage. Too funny! 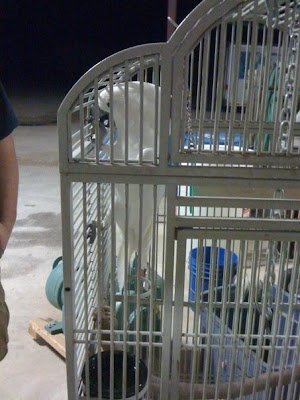 The owner is kind of a big guy and he kept trying to get her to show us her "big wings" and he'd spread his arms out and flap them and hop up and down. HILARIOUS!!

That was about it for that BUSY DAY!!Pin It
Posted by Julie H at 9:26 AM

I would totally be buying that house if you hadn't shown me the pictures of the spiders and the snakes!

That's a lot of cows, but look how cute they are.

The shopping center leaves a little something to be desired...lol