Good morning Happy Friday! I slept like a rock after Scott left this morning. I feel like I have a sleep hangover. I didn't actually fall asleep until around 1am thanks to drinking my Diet Mountain Dew too late in the evening. Some day I'll learn.
I stole this picture from Jess, isn't it fantastic? So cute! 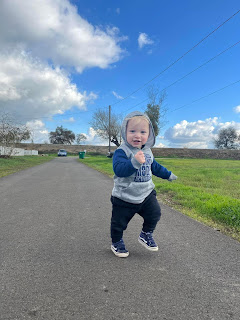 Daniel came over to hang out while mommy went to work yesterday. He is so funny he runs all over the house checking everything out. I was laying on the couch and Snookie will stand there and stare at me and whine but will not come close enough for me to pick her up and won't jump on the couch. So annoying. Rusty did much better yesterday, although I did put him outside for awhile. 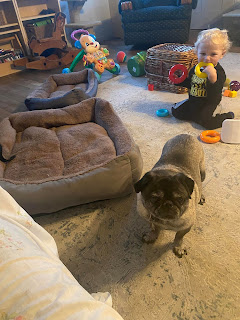 I haven't went shopping in awhile but Scott picked up some meat when he went shopping for his mom.  I was going to make some pasta but we didn't have any pasta sauce so I had to get creative for dinner. I was trying to make something the little one could eat, this turned out pretty well. Just added some spices and a can of diced tomatoes to the ground beef and then put some cheese on top. Stuck it under the broiler for a bit and then we had home made hamburger helper haha. 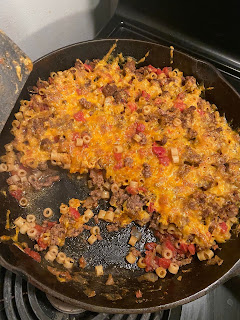 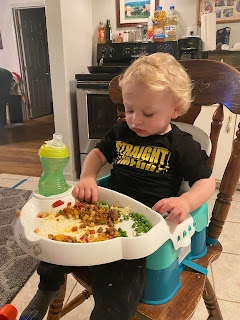 When he's done he throws everything on the floor. The dogs were super happy about that! 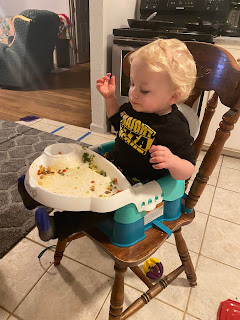 He made it a really long time before he fell asleep. I was hoping he'd make it until Scott got home. He didn't get home until around 8 though so he missed out by a few minutes. He was sleeping for awhile then he woke up with a wet diaper and then was just being fussy so then Grandpa got to hold him until Jess got home. 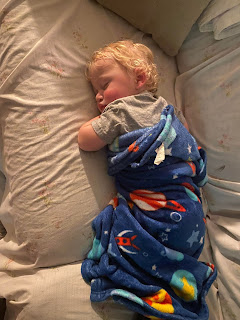 Trevor got the tree in the stand last night. I think this is the most beautiful tree we've ever had. Now to get some lights on it. 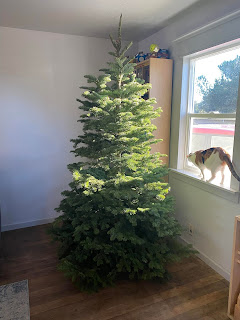 I didn't do any sewing last night but got the rest of the coasters ready to sew up. 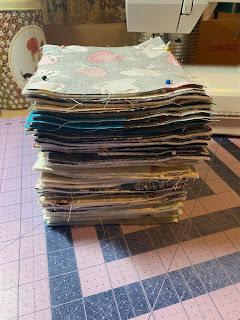 I need to go to the bank and get change for the event tomorrow at some point. We have darts tonight too. We are playing the first team we ever played so I guess we've made it full circle in the rotation. Our team is in 8th place out of 12th. At least we aren't dead last lol. I want to get my car all loaded up tonight too so I don't have to do that in the morning. That is so much less stressful for the event day! Hopefully I can get everything in there, I have so much stuff! All this sewing and hardly doing any shows this year.
I was watching Scraptastic Patchwork on You Tube last night and she was talking about her sewing goals for next year. It got me thinking about a few goals for myself.
#1 Pay off all my credit cards. Maybe if I sell all this crap I can pay them off? Haha. I have been making great progress on them. I could put a chunk of money I have saved and pay one off then I will just be down to one card BUT I don't know if I want to do that haha. I most likely will do that soon though. I am positive I can get rid of them all if I focus on it! Then I just have a small parent student loan that will start being paid on again and my car.
#2 is to work on getting all these totes emptied out. A lot of the stuff is paper stuff I collected to put on Etsy. So I think I am going to try and list like one thing a day (starting in January) to get that moving. 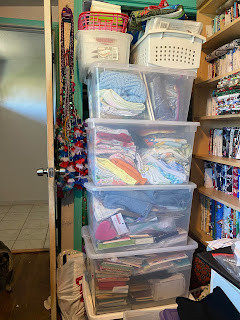 #3 Continue cleaning out the shed of stuff that isn't really important to me and get Scott's shit in the there cleaned up so we can actually all the way in there and see what we have. His method of organization is to just chuck it in apparently.
#4 Get the garage cleaned up and organized. A lot of stuff in there should be in the shed but it's all willy nilly because the shed wasn't useable.
That's enough for now! I've been thinking of what I want to do with Trevor's room if he moves out. I think I am going to put a twin size bed in there. I have a quilt I made in high school that I can put on the bed (one more thing out of the shed!).  After that I'm not sure haha. I might look for a day bed since that is what I used to have that quilt on. I know so retro 90's. I had a beautiful daybed with a canopy.
Ok three years later, I'm full of thoughts this morning! Off to do something productive.
Pin It
Posted by Julie H at 9:23 AM