Good morning! Happy Monday!
After saying I wasn't going to go to the Christmas party Jess asked if I was going because she wanted to go down to eat and take Santa pictures so I dug out my funny sweater and pants and went down there. They were already serving food and had the entire kitchen full with it. The meal was free so that was really nice. 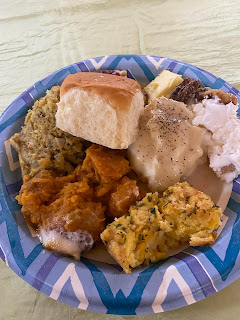 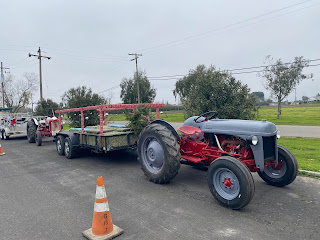 Jess is doing so much better and ate a bit. The baby was a little tired here he got woken up from his nap. 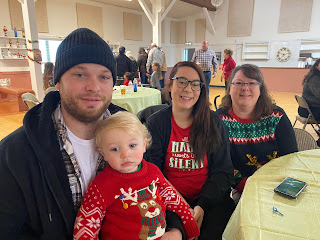 My favorite of the Santa pictures, he's like ok I'm just going to get down now haha 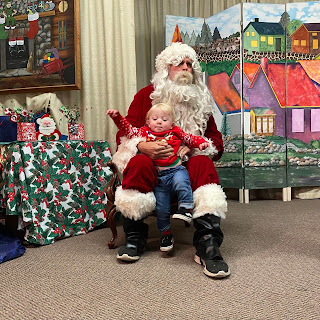 Gah he's so cute. I hope he likes me when he's a teenager ;) 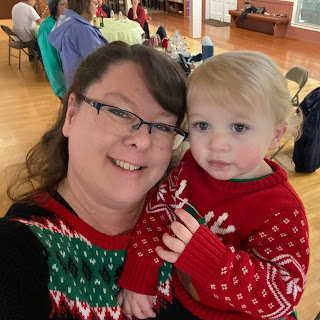 After the kids left I got a drink and was going to hang out but there wasn't really anyone "hanging out." Everyone was kind of busy so I just went home.
I finished doing my inventory, here is the box my mom was holding when she fell (lid removed). The whole side just like exploded. I had been thinking of not using this big box anymore anyways so no big deal. I got everything in two smaller boxes. 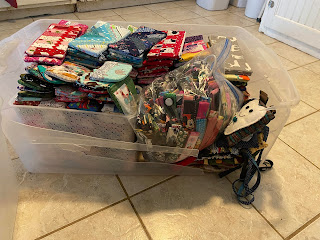 I finally had some time to sew a little and got a few keychains done with some interfacing I found. The rest are going back in the box for now. I need to get more interfacing before I can work on them. I like doing the whole "theme" thing I've been doing lately to break up just doing a ton of one thing to sew. 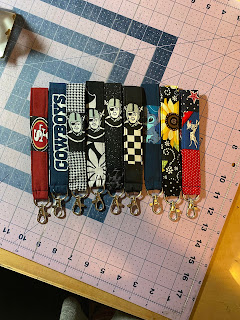 Tina was being a little shit and getting into everything so I yelled at her. Look at her all sad sitting on the edge of the door way. 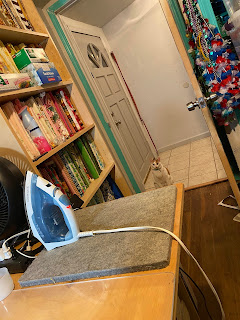 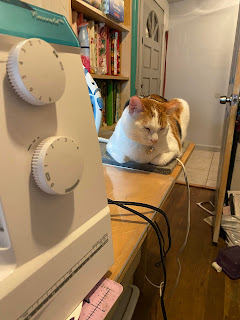 I am thinking about making some notebook covers for the kids to go with their gift cards if I have time the next couple days.
Here is our weather for the next 10 days. We totally need the rain but yuck.

I am going to see if I can get off work early today and go with Trevor to his eye appointment at Lens Crafters (other eye dr didn't have appointments until APRIL) then maybe do some shopping afterwards. If he gets a prescription for glasses (I'll be shocked if he doesn't) we can go to Costco and order him some too.
I'd like to get all the gift buying done with so I don't have to think about that anymore!
Pin It
Posted by Julie H at 9:03 AM

Psst, it's the 20th - you're not done shopping yet Julie? Glad to see Jess is up and around and all is well there. And yu are right - that little boy is gorgeous!