OMG who is exhausted? Raises both hands ME ME ME

Just as I sat down to work yesterday Jess asked me to drive her to the hospital, she was having really bad stomach pains and throwing up bile all night. I'm like ugh sounds like the gall bladder. Of course since she is pregnant she was so worried she was going to have a miscarriage. I drove her to the hospital and actually got pulled over on the way for not fully stopping at a dumb light that is on the way that has no cross traffic. I was like on the way to the hospital, kid doubled over with pain, officer is like ok just be careful! Sheesh. I think we hit every fucking light on the way there. At least 10.

We get to the ER and they actually let me go in with her after showing my vaccination card. The check in nurse was a real cold bitch and they sent her in the lobby to wait. Can you imagine if you were having a miscarriage and they made you wait in the lobby for 2 hours? At one point they took her to get some blood work and the security guard asked me to try to calm her down. I was like she's having major anxiety and is in a lot of pain, if they don't want people to hear her maybe they should take her in the back? She was like if she doesn't calm down she'll have to wait outside. You're going to make someone who thinks they are having a miscarriage wait outside? That would be some great news articles. TG that didn't happen but I am thinking of writing a letter complaining.

I had asked the triage nurse if she could go to maternity to make sure the baby was ok and they said no only if you are 20 weeks (she's 12).

Someone eventually came and took her for an ultra sound of the baby but wouldn't tell her anything. She even told the woman that she was scaring her not saying anything and she told her she wasn't allowed to say anything. Then she gave her a picture of the baby. I told Jess the baby must be ok or she wouldn't have given you the picture.

Here is our little bean! Looks like it's wearing a ninja turtle mask and smiling and waving haha. Eventually they took her back to a room and then an hour later this girl comes in and is like THERE YOU ARE! Apparently they didn't mark that she was IN A ROOM (with the door closed). Nice.
Then another hour or so for this and that and hours inbetween. Eventually the doctor is like so we're going to do do an ultra sound on your gall bladder. Like OMG why did they not do that when they did the first ultra sound? It is HOURS later with her moaning in pain.
THREE hours after the ultra sound I stood in the doorway waiting for a nurse to walk by. Finally one did and I was like anyway we can get an update? It has been hours since anyone came in the room? She was like offended and said there is only one doctor here. I was like yes I know but she is also in pain..
Amazingly the doctor comes in right after gives me a crappy look (lol) and tells her the results of her ultra sound are sludge and stuff in her gall bladder so he's going to consult the surgeon. I'm like hey maybe could you give her an antacid or something? Oh sure! Geeze no one though of that before.
At this point I left to get the baby so big Daniel could get some sleep before he went in to work graveyard. I got some food for us on the way home (hadn't even drank coffee that morning).
As soon as I drove out of the parking lot Jess texted me that they were going to do surgery to remove her gall bladder that night. Holy cow! I was glad I kissed her forehead before I left. So scary not being able to be with your people these days.
I brought the baby over our house and did an Instacart order since I have no kid food (or much food at all lol). He ran around the house having a great time. Literally runs so cute! Those little jeans are so adorable. 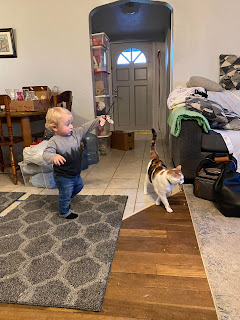 He hadn't slept all day so he had a nap on me (along with Snookie) until I had to pee so bad I had to get up and he woke up. 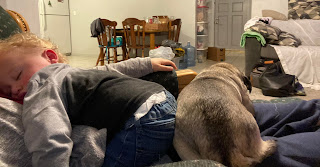 He had some cereal and crackers while I made some mac & cheese. He's watching Bolt on the TV lol. he has sooo many curls! 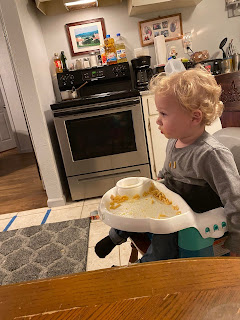 Trevor hooked up the laptop for me to the TV since that isn't a smart TV so we could stream Disney movies. He watches for a bit and then runs off. 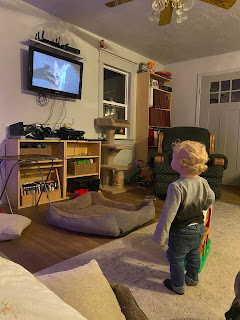 I took him home around 10 and he played in his room for a bit then I put him in his bed. He gave me a little giggle, so cute then went to sleep.
I washed dishes and did laundry at their house til midnight then attempted to sleep a bit. Daniel came home around 4 then I went home and crawled in my own bed.
Oh and at 11:30 I finally got a nurse to call me to tell me my kid was alive. I had to call twice and everyone who answers has a thick accent. This morning Jess is having a lot of pain since she can't have the good pain meds since she is pregnant. I hope all this stuff doesn't affect the baby.
She had me on speaker phone when the doctor came in. He told her that he consulted the hematologist and they said she wasn't at risk for getting blood clots after surgery with her Factor V Leiden. I don't know who this hematologist is but he's a fucking moron. That is exactly HOW you get blood clots with FVL. Being pregnant is an added factor. I told the doctor that guy was wrong and we have about 30 years of living it. He was like oh well I don't know much about it. And now she just texted me she had some other doctor just come in and tell her she has no reason to worry about getting blood clots with it because she is white. What a fucking moron! She's like uh my dad is white? He's had blood clots and he is also only one gene same as her. He tried to tell her he knew what he was talking about and she told him to leave. Good. These people need to go Google better. It's no wonder people die all the time with this gene mutation they have. No one knows anything about it.
She's ready to come home I told her be annoying and they will kick you out faster ;) I will probably take the baby home with me after she gets home so she can rest and Daniel can sleep for work tonight.
Catching up on work I missed yesterday until she tells me to come get her. Need to go get a 3rd cup of coffee.. ;)
Pin It
Posted by Julie H at 10:58 AM

OMG it's not like you live in a 3rd world country. Can she call her own doctor for info? My God they may kill her. I am glad the baby is doing well. I would not only write to the hospital I'd do 7 on your side if you have something like this. Once made public they will change but only if the public is involved sadly. Good Luck Julie and Jess. My God this is stressful!!