Good morning happy Monday!
Trevor is off work today but going on a trip to the snow with Melissa & Eric so I get the house to myself.
A girl who works in another office is messaging me that she has to go back into the office three days a week and  was wondering what I got told. Nothing yet but yuck. I hope it is no more than three days if I do have to go in. Two would be better. Obviously I don't need to be in the office to do my job except for every so often to print and file things. So we have that notice to look forward/dread. Oh now she is saying that is says "post pandemic" on it. hahaha I wonder when that is and who decides that.
Today is my official weigh in day. I am down 7.6 pounds since January 3rd. There was a lot of up and down this week. I think part of it is that I under-ate my calories several days and then my little cheat meal (which I don't regret lol).
Since Scott was out of commission yesterday morning I made my own breakfast ;) An omelet with mushrooms, pepperoni and pepper jack cheese, I'll probably have this again today. I've been eating more of a brunch/breakfast for lunch lately. 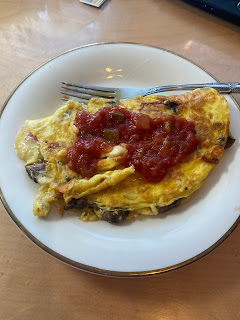 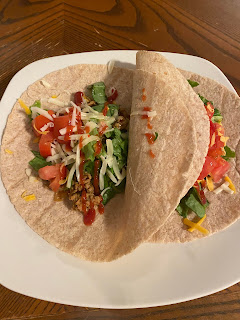 I was still a little hungry and had a lot of calories left to eat so I made a little dessert. 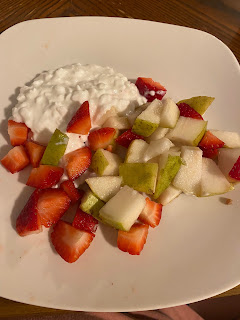 The baby came over and immediately fell asleep. Snookie thinks she is his nanny. 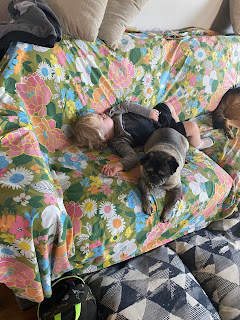 He played with Grandpa while I made dinner. (Yes I still need take the Christmas boxes out to the shed and apparently on one else can see them). 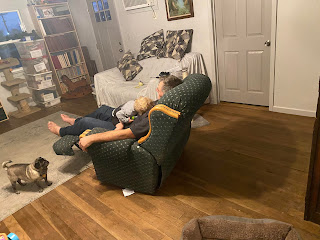 I finished going through the big box of paper and trimming them up. These are all like themed things that were mixed in, mostly from my friend's stash that she gave me awhile back. I have themed folders of paper and stickers in my tote that I will put them in. 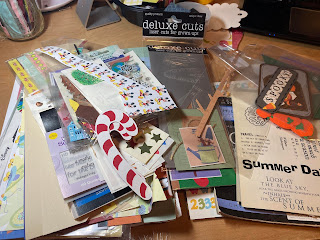 My cleaned up paper 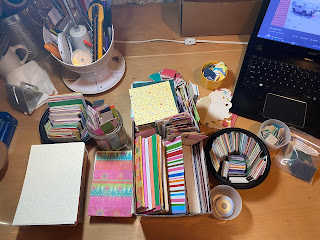 and I am going to make up little kits to put on my Paper Etsy site with what I have. I made a few up last night. Just need to take some pictures and list them. If they don't sell then no biggie, at least they are all nice for if I want to use them later. I'm going to have to pause from that though and work on my sales stuff so I can file my CA sales tax thing by the end of the week. Looks like I did through April lol. I don't think I sold a whole lot after that but I can't remember when I did my big pattern purge to get rid of them all. I'll find out shortly. Other than that I just had a little bit of handmade sales here and there and only a couple craft shows.
Ok off to go find some socks my feet are freezing. Hope you all have a great day!
Pin It
Posted by Julie H at 9:18 AM

I am giving up on dinners. So tired of trying to come up with something. Wish I was rich, I'd have a chef. Tonight will be boring - taco salad.
A big ole taco salad made by me!

That's too funny..."I am the only one that sees them". My mother says that daily about my father!!! I think if it does not bother you it is as good as out of sight! HAHA!! Great job on the weight loss!!! That's fantastic!!! I NEVER feel guilty about a cheat day - we all need those! Have a great week Julie! HUGS Annster