Good morning happy Monday! We made it another week!
Today is day 28 back on diet track and I am down 10.2 pounds. Not too shabby for the last week's stress. I now use a big plastic basket I have to bring dinner items over to mil's house. Works pretty good.
Dinner last night x 2 because I still had a bunch of calories in the bank and kind of did a stress eat but still didn't get out of my calorie range. 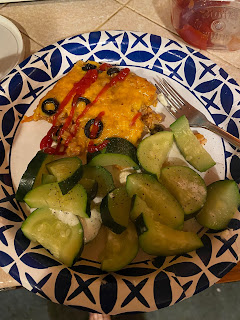 Yesterday we started cleaning up Scott's old bedroom. He's decided he wants to put a bed in there since he's sleeping here every night. (also the only bedroom no one has died in).  This room is the crap room of the house where everything got tossed. I've discovered where Scott got his organizational skills from. HIS MOTHER haha. Although the whole room being a mess isn't her fault since his sister moved stuff around when she was here and we even had moved some stuff when we moved her from sleeping in that room out into the living room a couple years ago.
This is the slightly organized view. She has an ancient shredder Scott was using to shred shit from 10 years ago. If you save all the paper bills and junk mail you get, do your family a favor and at least get rid of the last year when you're on a new one. No one is going to come after you for a bill for your cable after 10 years.
Scott did find his birth certificate though so that was good, saved us $30 to get a new one. Also found every one's hair clippings, not quite sure how I feel about  that one haha. 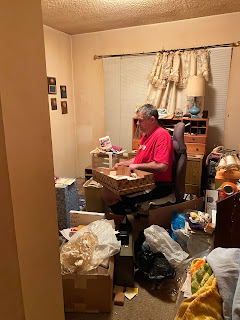 There were bags of clothes on the floor in there (she says her daughter did it) so we went through them one by one for her to say keep or donate. She mostly lives in sweats now so it was funny watching the emotional attachment to some things. I totally get it.  This is the donate pile. 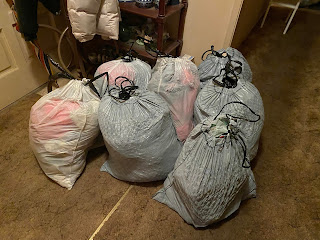 and the keep pile. I'm going to wash them all and put them away better. We found all the sweaters she crocheted and she wanted to keep those so I think I'll get a plastic tub box for those. 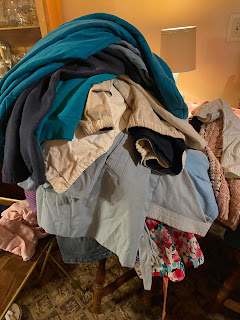 Scott found her yearbook she's been wanting to find. Most of her stories she tells are from these days. It is kind of fun to see the faces to go with the names of the people in the stories. She said that her brother bought her the yearbook as a thank you for helping him get into boy scouts. He couldn't read or write very well and so he had to cook a potato in the ground and she helped him with that. He passed and eventually became a scout master (her recollection ;)) He's a senior in the book and she is a sophomore. 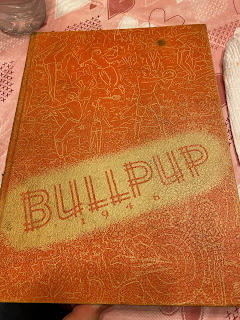 Somehow I never knew she was in band but she was! She said she did the baton too. She is in the 2nd row behind the girl with her hands next to her face. The class picture is a group one like that too, I'll have to snap a picture later. 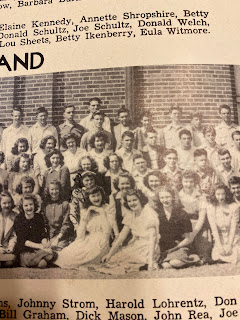 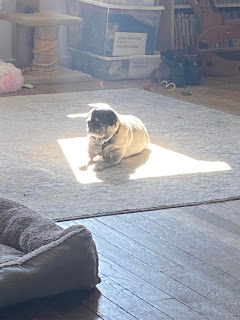 Jess said she went over to my house for a break from hers and Snookie looked sad so she took her home with her. She gave her a bath and brusher her. Maybe she'll take Rusty next ;)
She put this cute bandana on her too haha. 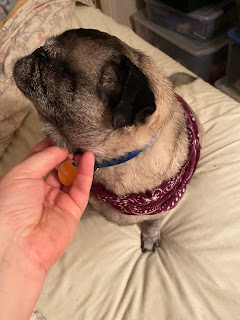 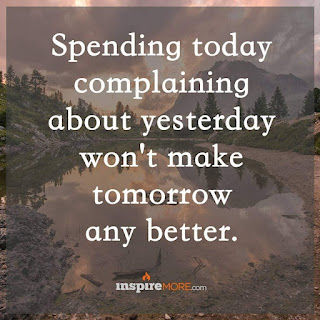 Me every morning. I hate mornings. Need to change it to a white cat and it's so accurate lol 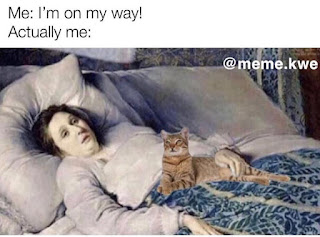 Sent this to my girlfriends and said this is me next time we hang out ;) I haven't drank at all this year, I'll probably get drunk super fast now lol. 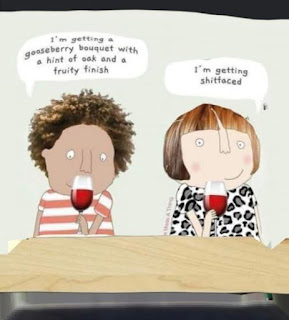 ok I guess I should do some real work. Only a few emails this morning to catch up on. Have a good day everyone!
Pin It
Posted by Julie H at 9:57 AM