Good morning happy Saturday! I kind of slept in between getting up to take the dogs out, getting up to feed the dogs and getting up because they were annoying me.
Yesterday after I went to work I went grocery shopping (YEAH FOOD!) and then I went over Jessica's for a bit. The neighbor was selling a fridge and hers has been dying for awhile so we got it and with Trevor's help got it loaded up in the truck, out of the truck, up 3 stairs, through the BIGGER door in the front of the house and into the kitchen. Sheesh that was a lot of work. Hopefully it works better than the old one that sounded like it was ready for take off when the fan would kick on in it.  Also not waste as much food for going bad. It was replaced to buy a new one to match the new appliances not because there was anything wrong with it so knock on wood that it lasts awhile.
Got some tiny baby snuggles in while I was there. She's so sweet! Little Daniel was sleeping and then running around while the fridge stuff was happening. 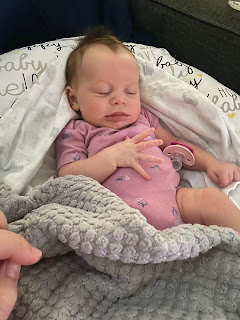 After that was done I went to the bar and came home at midnight. Only had two drinks but had fun sitting out on the porch and talking to people older than my mom.
This morning I was scrolling FB and see my husband's angry post to the A's. He cracks me up.

AND today was payday so this is how much credit card debt I have now! So exciting!

Now to chip away at that Parent Loan. Shouldn't take too long since I've been eliminating all the other bills I had!  Lets just pray nothing breaks or happens to steal away my money from my plan here ;)
Pin It
Posted by Julie H at 9:07 AM