Good morning happy Monday!
Working from home today, because, why not? Last week with my boss. Next week starts the new crap.
Yesterday I got all the 1" scraps sewn together and into a roll. Then I vacuumed and mopped the house and got done just in time for Lilly to come over. 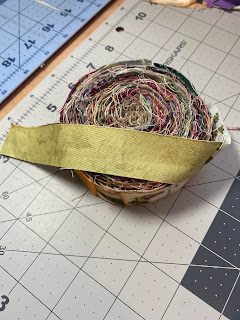 Daniel had fallen asleep with his dad so he came over later. 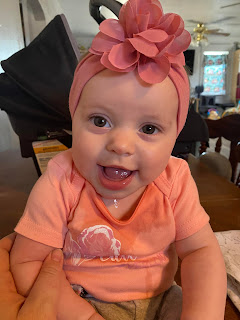 She played awhile then had a bottle and slept for several hours. That is the longest she's ever slept for me. 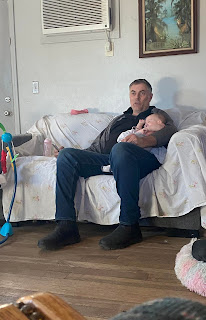 While she was sleeping I cut some fusible fleece for the coasters and started ironing and pinning them together. I had to stop to get Daniel though so that is where they lay.
Lilly is a bouncer just like her mama. Jess had one of those jumpers you hang from the doorway and man she used to love that. Lilly gets this thing bouncing pretty good. 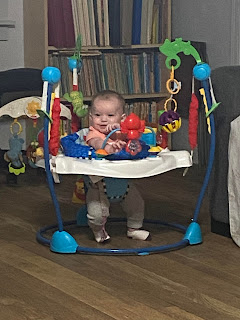 I brought out one of the rugs so they had a spot on the floor. Still waiting for Simon to be completely potty trained before leaving them out. I rolled it up after they left lol. 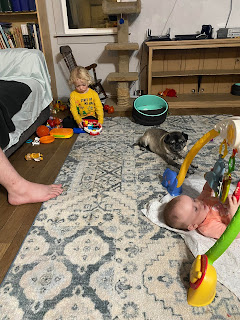 Trevor went for his job yesterday and I guess the facility he got hired on is full so they are going to shuttle him to another one like 45 minutes away (with no traffic) starting tomorrow morning at 1:30 am. We will see how long that lasts. I probably would have just been like thanks no thanks but he's a kid. He said they get paid for the shuttle time so it is worth it but idk about that one. He was up early this morning so hopefully he takes a nap later so he can work in the middle of the night.
Today's plan is to at least make a menu and a shopping list and maybe go to the store. If not today then tomorrow I will go shopping. Need to have some meals tired of eating frozen stuff.
Pin It
Posted by Julie H at 8:48 AM

oh he's young he can handle it. I worked from 11pm - 7am. Went to school at the same time. I gave up sleep to do all kinds of good and bad things. :-) Allow him to do it now while he's young and see the hardship of working for a living. He'll figure it out. We did right?