Good morning happy Sunday! Believe it or not I like the beginning of this time change because I don't have to kill myself to wake up on time for a bit haha. I am so not a morning person and woohoo I'm wide awake already lol. Of course all I want to do is sleep once it is dark so we have that depressing thing too.  I haven't even sewn much all week because I just want to go lay down. I need to stop doing that since that is too depressing.

Yesterday I had a craft show called the Handcrafter's Boutique. I've done this one a lot of times but now it is at a new church. Same gal putting it on. She does the most amazing thing, she has you come to set up according to where your booth is and has volunteers take your stuff from your car to your spot and they set up your tent and tables. It is such a nice start since you aren't totally exhausted from lugging all your stuff first thing. 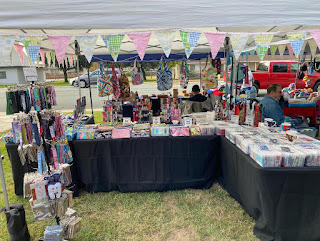 I had pretty good sales but I have got a bit spoiled by the GREAT sales when I do the Lodi Street Faire. 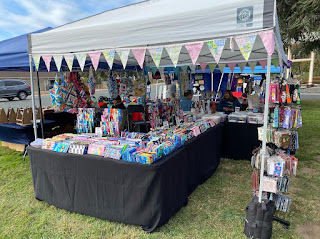 I really like this set up, it makes it so you can have a lot of people looking at your stuff at the same time. Three tables making a zig zag. I also had the spinner and hung my extra keychains on the top layers and then the coasters and mug rugs below it. It worked out pretty good but I think next time I might do every other layer keychains/coasters since some were pretty low to look at.
I had a few people take advantage of my $1 cup cozies too so I should be able to get rid of at least one more box when I inventory them. It takes up 3 tote boxes to bring all the shoe box size boxes so I'm trying to get that down a bit. Also I've had most of them for a really long time so I'd like to get rid of all of them and start with some fresh ones once the old ones are gone! I've debated putting up some lots of them of eBay to clean them out. I wonder if they would sell on there. 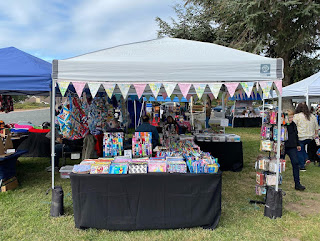 There was a girl across from me who also sold zip bags and keychains but hers were a bit different. Always awkward to have someone that is a bit of a competition right next to you. They guy behind me had some wood stuff, I'm not sure if he sold anything and the one to my left had jewelry. She sold at least a few pieces that I saw. Super nice woman and her husband.
The weather was nice with no wind and just a bit cold but I had brought a heavier sweatshirt so it was just fine. I was not the last one to get all packed up this time and I did take my time. I don't understand why people are always in such a hurry to get out when then you're fighting for a parking spot to load up and all. By the time I was ready there was one on the road right next to where I was lol.
After I went to my friend's house to pick up some frozen pies I bought for her sons fundraiser and hung out for a bit. Scott met me at the house when I got home and we went to Sizzler with our tag along child. I got the salad bar (so nice that is finally back post covid) which of course has so much more than salad.
Today's plan is to inventory my stuff again and then later I am babysitting the two grandkids. Scott is going to come out too so he can help for the first half before he has to go back to feed his mom. Poor guy keeps walking in on his mom all naked (her bed is in the living room). He's like I'm going to have to move her bed just so I don't have to see that.
Ordered some stuff from Instacart this morning. I'm going to work on Tuesday for sure since we have a meeting so I will make myself go big grocery shopping after that. It's a good time to clean the fridge right now since there is nothing in it haha!
Now to go lug in a box from the car. I never did totally clean my car out last week but now I don't have another show for over a month so I can't get away with that again.
Pin It
Posted by Julie H at 8:18 AM