Book Review Round Up

What's more fun than a cat in heat?

A cat in heat getting screwed by my neutered male cat and then the dog going psycho about it and everyone freaking out. (I thought they couldn't figure that out once they were fixed? I was wrong)

Yes yes, I must take Lucy in to get spayed ASAP.

It's all a bundle of fun over here. I'm pretty sure I have PMS because everyone can't stop breathing SO.F'ING.LOUD.

I'm so over hearing everyone complain and being depressed and life sucks and I'm bored and blah blah blah. Have a drink! I'm pretty sure that's why they invented alcohol. It makes everything better for at least 10 minutes.

I'm thinking today was probably not a good day to take a rest day. I guess I could still go to the gym but I'm thinking I'll just go read a book instead.

Speaking of books I finished a really good audio book today. I am going to do another "what I read" round up and I can't believe the last one I did was in August? Where has the time gone?

So the audio book I finished today is called Body Surfing by Anitia Shreve.


The story starts with Sydney. She is staying at the beach house of her employer, the Edward's. She is there to tutor their daughter Julie, who "is a bit slow". Julie has two older brothers, Ben and Jeff.

This book was a nice relaxing book to listen to. Nice even pace for the most part.
A single mother who can only move her head and her 13 year old daughter and the few people that come in and out of their lives in a short time. They have a care taker named Peacie who has taken care of Diana since she was born. I laughed many times at their relationship together. Peacie is African-American and her boyfriend becomes apart of the movement for the equal rights. So that is also part of the story.
Yep, that's all I wrote.  Boo

The tension in the house is pretty strong. Mrs. Edwards doesn't really like Sydney. Mr. Edwards on the other hand is a very nice man. Sydney because kind of part of the family, but then not totally of course, during their time they stay in the beach house.


So there is a dance going on. Sydney trying not to piss off Mrs. Edwards. Mrs. Edwards not liking what Sydney is doing with Julie. Julie disappearing and growing up overnight. Jeff and his girlfriend and Jeff and Sydney and Sydney and Ben and Ben and Jeff.
Lots of story and it floats along to the music and you float about with it.
The story also takes place in the same house as some of the other books by Anita Shreve and she works in their stories. I wouldn't have known had I not just listened to another one of her books "Sea Glass".
Overall I really enjoyed this story. 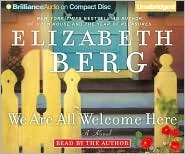 We Are All Welcome Here by Elizabeth Berg. I also listened to this in audio book form.

The story idea is based on a true story about a woman who gave birth in an iron lung and was paralyzed from the waist down from polio. In the beginning the author explains that that is the only "real" part of the book and the rest is her imagination.
The whole story is pretty amazing to me.

The main character Diana is at the age of learning and discovering. She's grown up with people giving them items to survive, but also with the understanding that their family is different and that people don't always accept that.

I found it to be a very interesting book and a good story. Any book that makes me go Google things to learn more after I'm done reading is also a plus in my book.

This is a story about a girl that was on a Jury. She ended up being a swaying vote that got other people to see her side and set the defendant free.

But the guy that goes free is a real whack job and he wants to thank her in ways that she'd rather not be thanked.

I thought the whole idea of a Juror getting stalked by a man that she helped go free was so easy to happen.

Enter in the detectives who are watching the Juror AND the whack job guy and of course, you have some sparks somewhere to make a bit of a love story in the middle of the whole mess. They dipped a lot into the detective's past and it almost seemed to me like maybe he was a returning character for a previous book that I didn't know about. Eventually everything got explained but it was a bit confusing for me for a bit.

Overall another good Sandra Brown book! Stick with the mysteries and you won't be disappointed! 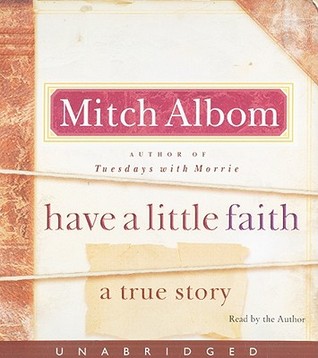 Have A Little Faith by Mitch Albom (audio book)

I'm not going to lie, I picked this one up at the thrift store mostly just to add to my book swapping site. BUT I ran out of things to listen to so I went ahead and listened to it.

Totally not what I was expecting and I really enjoyed it.

This is a story of how Mitch came to know and develop a relationship with two men of faith.

First you have The Reb who Mitch grew up listening to in church. The Reb has asked Mitch to write his eulogy. Mitch was a bit taken aback so he ended up just spending some time with  him, which turned into more of a just an ongoing friendship over the years. We travel with them from that first awkward meeting to the time where he delivers what  he's promised.

Next you have Henry. Henry is a very large man. And a Pastor at a church for mostly the Homeless. Mitch meets him when he's trying to find a charity to help. We learn that Henry wasn't always a man of the cloth. He was a criminal, a drug dealer and user and spent time in jail.

All the stories are just so interesting and I just kept listening because I really wanted to find out what was going to happen to everyone. I MAY have gained "A little faith" along the way too. 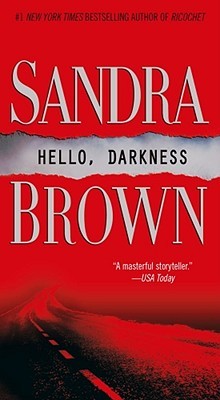 Hello Darkness by Sandra Brown (I ACTUALLY read this one!)

This was our book club book for October. I was kind of sad that more people at wine club I mean book club didn't actually finish it so that we could discuss it!

We've got a few things going on in this book.

There is Paris, who is a late night talk show host.
The Detective, who has a teenage son who has just come to live with him.
The Sex Club, which is an online forum that meets regularly to get it on with their forum members. Most of who are under age.
The kidnapper who we don't know WHO he is (really I wasn't sure up until the end!)
The kidnapped girl, who is a member of the sex club and was a willing participant with the kidnapper until he got too dirty.
And a bunch of other characters.

This is really one of those books where you just keep reading because you have to figure out WHO DID IT.

Very good, go read it, come back and discuss ;) 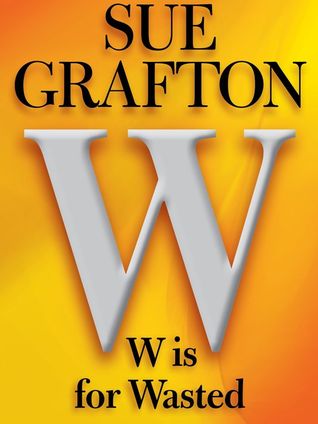 W is for Wasted by Sue Grafton (read this one too, go me!)

I'm a big Sue Grafton fan and I've been waiting for this book to come out since I finished her last one.

All Sue's letter books are about Kinsey Millhone. Kinsey is a smart alec-y (is that a word?) single woman who lives in a rented garage turned apartment. She lives next to the landlord who is an older man that stands in as her personal shrink and advice giver. Oh he cooks for her too. The description of his bread make me drool.

So this book is about this guy that is dead. For some reason he has Kinsey's phone number in his pocket. She ends up going to "identify" him, which she can't really do. But she starts being the detective that she is and works out the puzzle.

She finds out that he is a homeless man who may have participated in a research experiment with some shady doctors. Oh and he may be kind of related.

This was a really good book and I can't wait until the next one comes out. Each of her stories are all different but with a few of the same characters that get built upon. 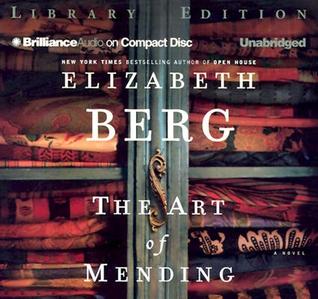 The Art of Mending by Elizabeth Berg (audio book)

This story is about Laura and her family. She has a sister and a brother along with her own husband and children.

Her family goes back home to see her parents and siblings and when she does her black sheep sister brings up some stuff from her past that are just so incredible no one can believe it. She must be making it up!

But upon further inspection Laura learns that her sister is not making things up, and these things area really true. She also learns the circumstances that lead to the events that have shaped her sister's life and relationship with their mother.

This book was not a "feel good" book but a book about relationships, family and deep dark secrets. Honestly I found it a bit depressing. 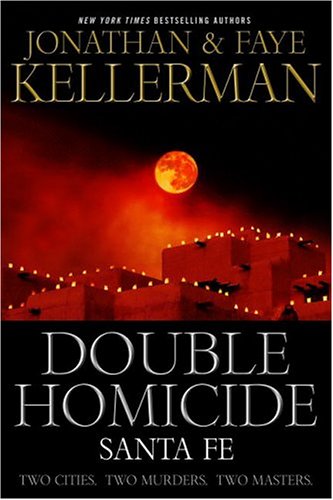 Here is the review I put on Goodreads because I can't remember much more about it haha.

I didn't really realize that this was two books in one. I really like the writing style of the authors.
The first story though, I was a bit surprised when it was over. That's it? I thought? It seemed like it was over too quick after all the build up of the case. Interesting story though!
The second story I really enjoyed. The story of Two Moons was fantastic! I just loved it. 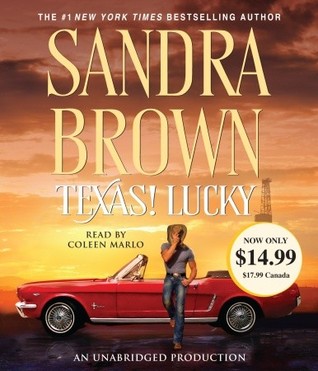 What I remember from listening to this book? A LOT of eye rolling.  Stupid, don't waste your time. 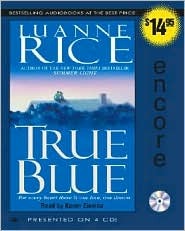 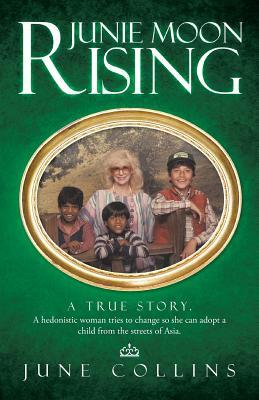 I'm totally fascinated with Junie Moon. She's lived so many different kinds of lives all in one! To think I've lived in the same 45 mile radius my entire life and she's been all over the world and back. Thanks to her books I got to experience a bit of her travels with her.
Junie Moon Rising picks up right when her last book leaves off which I was thrilled with. Bathing topless on a big Japanese boat to running a trucking company in Alaska, we travel along with June through her life experiences.
I thought this was a great read. I was a little sad when it was over!