I had to get a piece of paper out to figure out what day we are on. Every day is like one big blurrr lately. Can we just go back to normal already?

This morning Scott has high hopes that he might be able to go home today. I think they finally got his blood to appropriate level of thinness, which is to help prevent more clots. What's odd to me is that they don't seem to worry too much about the clot he already has. Like, is it smaller? Going away? Once they got done worrying about if it was in his lungs it went to almost off the list of things wrong with him.

Today is Columbus Day WOOT WOOT that's my one holiday a year that I get off that no one else in the house does. My kids still have school and Scott still has work. Funny how it's not all that exciting this year. YAWN yep just another day off. Usually I get paid for it though.

My dog is just freaking out this morning. I think I left him a bit too much over the weekend and he thinks he needs to sit on my lap. 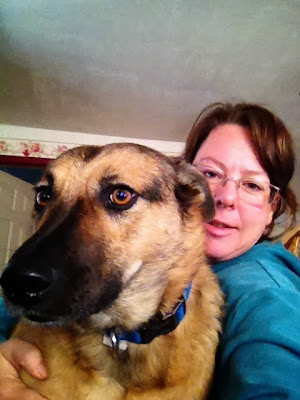 I let him sit up here for a minute but I can't reach the keyboard and see the monitor around him so now he is walking around whining and then coming back over to stare at me. Silly (but annoying).

So today's agenda is to
Top priorities of the day haha

I got a thing from the unemployment office saying I needed to sign up for this Cal Jobs site in 20 something days since I've applied for unemployment so that must mean they are processing my paperwork. YEAH! I sent off Scott's disability paper work on Saturday so that will be rolling now too. If we are lucky everything will fall into place and we will be ok.  I guess I should pay some bills with the money I do have for now!
-----------------------
Well I got everything done on my list but #5, not too bad. We just had waffles since I never went to the store.

We thought Scott was going to come home today for a little while. This morning our doctor said that his level was at 1.9. They wanted it to be at 2.0-3.0 so it was close and he said he thought he could probably go home and recover at home just as well. He said he was going to check with the other doctor and see what he said. That was the last we heard of it so I guess the other doctor didn't agree or something. Nice lack of communication there. So it's one more night for him. Sucks.

I managed to get a lot done today. I paid a couple bills, did some laundry, put away A LOT of laundry (almost caught up!), cleaned out the refrigerator, washed a lot of dishes, went to see Scott twice and got in my run (4 miles).

I also finished listening to an audio book "Have A Little Faith" not something I would usually pick out for myself but I got it cheap from the thrift store and I had run out of other books to listen to. It's taken me a couple weeks to listen to the 4 discs because I wasn't driving much. Funny how something I started off listening to so long ago ends up being quite touching by the time I'm finished with it. Funny how that works out.

I'm hearing rumors of possibly going back to work on Friday. Let's all pray that that is true!

Oh and something else some people have asked me about my work.

I work for 2 employers. One is the East Stanislaus Resource Conservation District and the other is LUSA Associates. Both hired me as a contract employee for a division of the USDA, Natural Resources Conservation Service. So I am NOT a federal employee. I am however, paid to do a federal job (Farm Bill Assistant), on a federal computer, at a federal desk in a federal building. While the ESRCD does do things that are not in the federal office, I am not really contracted to do those things at this time and most of the work they have is for the NRCS, which, being a federal "business" cannot be worked on at this time.

So IF the federal employees get back pay at the time that all this mess is over, I most likely will not. Unless for some reason that the ESRCD board decides to honor that. I've heard a rumor that they are saying they will not. The LUSA contract I'm 99% sure will NOT. They do not usually honor anything.

I also do not have federal benefits like medical and retirement. I do have some through the LUSA contract but it maxes out $10,000 per person per year.

I DO however feel very lucky to have this job. I have worked for the ESRCD for 7 years now (not counting the almost year they ran out of funding for me and I was laid off). Before I worked for them I had been a stay at home mom for 7 years. I didn't go to college (one semester, then I met Scott and got married and had kids) so I don't have a degree in anything but laundry. I get paid well when I'm working, I work fantastic hours, I don't have to work weekends and my bosses are awesome about letting me have time off for my family when the needs arise. It's a pretty cake job if you ask me. Maybe some day I'll get to go back, hopefully Friday!

I need to go read and get caught up because I didn't realize he was in the hospital now. Jeez.

I hope all things work out soon.
This congress shit is hurting us all except the asswipes in congress.

I love the pic of your dog. He's probably also missing the "pack" one of them is not at home.

The blood thinners should have taken care of the blood clot mate.
Mine went away after they stuck me with 4-5 injections around where my blood clot was!
Injections... OMG just remembering them is nasty.

Anyway, I hope like hell Scott is released soon and is feeling much better soon.

You are doing a fantastic job looking after him and the household.

Are you unemployed now? How did that happen? I must have missed something.

I'm hoping they back pay for you! How many are quitting?