Good morning happy Sunday!
Yesterday I spent most of the day cleaning up my scraps and playing with Daniel. He came over for a couple hours. He is now monkey status. he climbed up on my dresser three times.  I think he's proud of himself haha. His mom put his hair in a samurai bun so he's ready for his karate kicks! 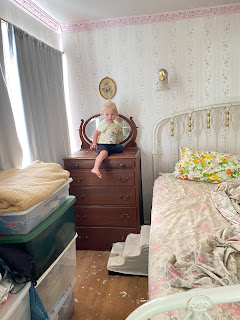 Surprise! I was working on the pink scraps. As usual lol. I had a lot of pink and blues. Maybe I should mix them together since I don't think I've done that combo. I was super tired yesterday and went to bed kind of early. Surprisingly I slept til almost 7 today. 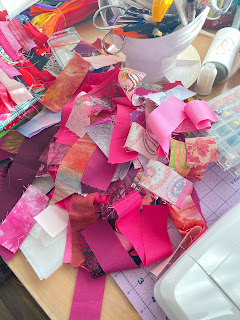 My leg looks so bad this morning. It still hurts too. 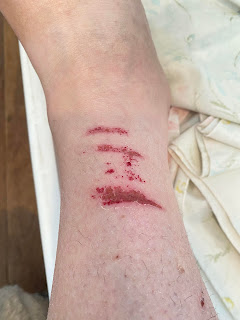 Yesterday I found that Simon had chewed on my glasses a little. Lovely. Luckily my other pair is ready for pick up at Costco. I'll probably just get them after work tomorrow since I can still wear the others. The lenses are just scratched and the nose piece cushions are gone lol. I'm really surprised she didn't chew on the frames part. I think every dog I've ever had has chewed on my glasses.. It's like a right of passage (and yes I had them up on my dresser but apparently she didn't have a problem getting them ;)
After I finish my coffee I need to jump in the shower and then get some laundry going. No more putting it off, it's the job for today. Telling myself in a stern voice haha.
Scott ended up coming over about 10 yesterday and stayed til about 7. He made the ribs for us and they were yummy. No pictures though since I had to get mine and eat them before they were all gone lol. No left overs ever.  I have a recipe for carnitas in the crock pot for tonight. I need to get that going. I couldn't find a couple of the spices in the recipe so it will have a bit of make it work spices ;)
I finished watching the new "A League of Their Own" last night. Just take everything you know about that movie and throw it out the window. This one is about women being lesbians and playing baseball. An interesting spin on the original but it makes me wonder if they could have just made their own movie you know? Although I probably wouldn't have watched it then haha.
Pin It
Posted by Julie H at 8:07 AM