Good morning happy Friday eve! I didn't have much to talk about yesterday so I didn't haha. I went to darts Tuesday night and our team lost all but 2 games. Oddly enough my arm has been aching at night the last 2 nights after. Ugh getting old sucks. Hopefully our team gets a bit better haha.
The one guy on our team I found out is the son in law of an old neighbor who passed away a year or so ago.  We talked about him for a bit. That old guy was a bit eccentric I think. He had an old dog Willy that was so cute but passed before he did. We always think of that dog when we talk about him.
Yesterday I worked in the office again. We had a big staff meeting so here are some doodles for you haha. We hardly have any staff now. I don't think we've ever had such a small one. This next fiscal year is going to be a challenge if we don't get more people soon. They haven't even flown the jobs to replace the people that left so that means it will be like 2-3 months before they even hire anyone. 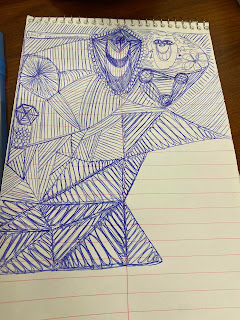 Scott went to the dentist yesterday. He has a broken tooth that is going to have to get pulled out (TG it is in the back) and needs to get FIVE crowns. Luckily I still have some money stashed in my health care savings plan thing that will cover 2/3's of it. I told him maybe he can schedule part of it for after the 1st and I can refill the account lol. I think that is what is going to happen. He goes in a week from tomorrow to get the tooth pulled and 2 crowns I believe. I said I don't think I'd want to do all that in one day but he thinks he will be fine. I'd need a Xanax I think haha. Every since I had a root canal done I hate the dentist.
Today after work I'm going over to my mom's house to take her a picture she had hanging up in the cabin. She's doing a sleepover with the grandkids on Saturday (campout in the house style since that is all my one SIL will allow..) and wanted her big raccoon picture for it. She always has to have everything magazine worthy lol. Anyhow, we are going to go out to dinner I think.
That's all I've got for this morning. Anyone want to wash the dishes for me?
Pin It
Posted by Julie H at 9:14 AM