Good morning happy Monday! Made it to the office today. My boss just asked me to write some letters so that is what I'll be doing all day (as soon as she gets me a template, which she was supposed to do months ago haha).  Almost caught up on everything else I had to work on already too.
I wanted to come to work today to get a break from the animals. I love them but they are a bit exhausting. Yesterday they were all fighting over this little cottage cheese bowl that Simon has been carrying around for a few days. I'm like wth are you even fighting about lol.
It's a good thing she's cute. 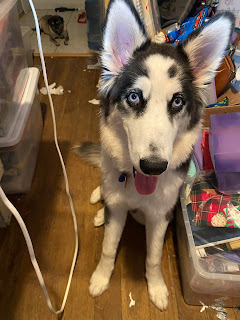 Then this one, I swear! 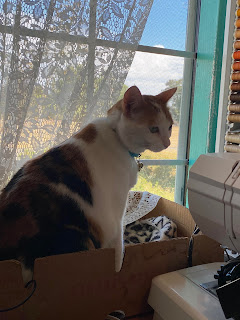 I know better than to leave these drawers open but lost my mind for a sec and took the dogs out and she threw the green fabrics all over. Luckily I caught her before she did the whole drawer. 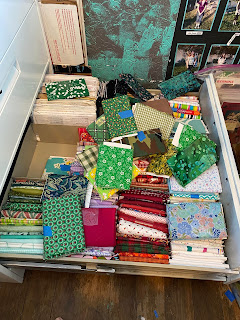 I spent Saturday (except when I went to my reunion) and Sunday working on the last of the Disney fabrics to make up. Here is where I finished last night lol. The ones on the left have piecing to do and the ones on the right are ready for the batting. As usual I do too much at once. 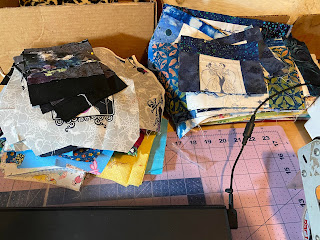 Saturday I went to my reunion. I got there a bit early so I drove around the park. It was at Micke's Grove. They have a little zoo there and they used to have a little amusement park. They took out all the little rides and it is sad and abandoned looking now. It was so much fun when I was a kid.
I didn't take any pictures at my reunion. It got dark real quick and my friends didn't seem to want to take any pictures so I didn't push it. I mostly just talked to my 2 friends but we did catch up with a few others that would stop by and chat. There was hardly anyone there really and a big chunk of the people were girls that were on the drill team. People I never talked to haha. So that was nice but I would have been ok with just going to lunch or dinner with my girlfriends. In another 10 years they'll probably combine us with other classes and we'll meet at the senior center ;)
While I was doing that my mom was having all the grand kids over for her indoor camping night. OMG my mom is so extra but I kind of love when she does this stuff. She sent me pictures so I figured I'd share ;)
Jess took Daniel and Lilly but went home after dinner.
Here is my mom with the littles (missing 3 of the older grandkids). 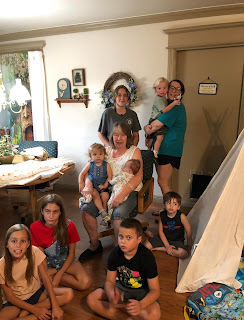 This cat is so lucky it picked my mom's house to show up at. 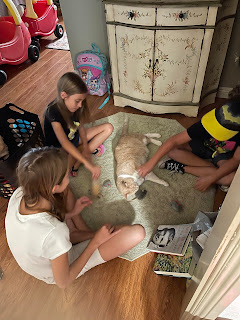 Hot dogs and beans! Jess said he actually liked the beans so that is shocking. (She hates beans) 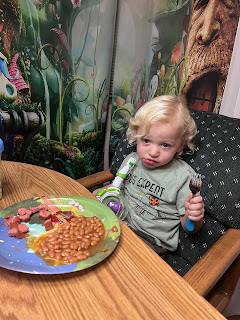 Looks like she had a teepee for each kid with a theme bedding and stuffies. 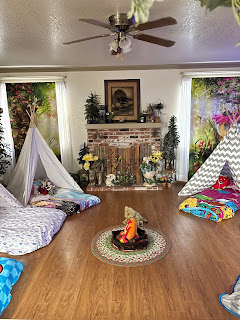 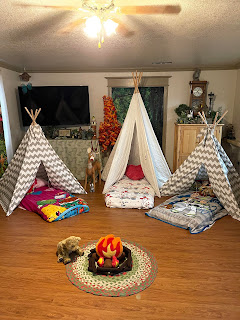 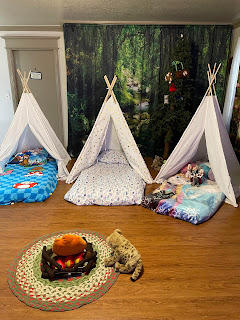 stories around the campfire? 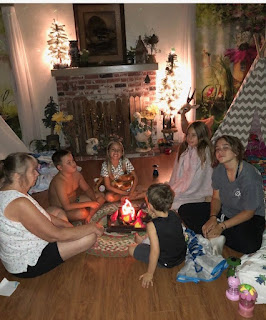 Sleeping under the stars haha 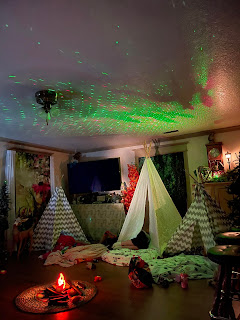 She said she had to take one kid home since he coughed so much he barfed at 1:30am (he went to the doctor and they said it was from all the smoke from the fires). Before that she said the two boys were fighting for the first couple hours and she questioned her life choices but they had finally stopped haha.
No big plans for today besides work and sewing later. I have darts on Thursday this week and I took Friday off for Scott's dentist appointment. That's all the plans for this week. This is my last weekend to get stuff sewn up for the Lodi Street Faire so I need to get this Disney stuff done and make up a few sports team keychains and bags too. Why do I always make myself rush to finish stuff haha.
I ordered a big rack with pegs to try putting my cup cozies on. I think it is supposed to come today. I am going to try it out and see if it will work. I might get a 2nd one for keychains too depending on how far spaced the pegs are. Hopefully it will work for both things! I am thinking I'll put coasters on it too. I will have to put little hang tag things on all the packages and I got those yesterday. Might have to get some kids to help me out ;) I'm really hoping this works well since it will free up table space and I think it will look nice and be organized.
I got a picture of the new baby with my sister in law but I'm probably not supposed to share it so I won't. My mom said that they were maybe going to get her yesterday or today but I haven't heard that they have yet so I don't think it has happened. I need to get the stuff I bought over to them soon.
Pin It
Posted by Julie H at 10:08 AM

What a cool thing your mom does with the kids. I loved the teepees!! I'd love to have grandkids but since I never had kids that isn't possible. I don't want my own children but would love some grandchildren. LOL