Good morning happy Sunday from the kitchen table! I'm glad I still have a kitchen table since yesterday I thought my house might be burning down! Scott was making hot dogs on the stove and had the burner up high. Apparently there was a lot of grease under the burners and it caught on fire. It took us forever to get it out until we got the baking soda out and dumped it on there. TG For baking soda. I was almost to the point of throwing all the animals out of the house thinking we weren't going to get it out. So if Scott can't replace the wires on one side of the stove I'll be buying a new one lol. Never really liked this one anyways. If I buy a new one I'm going to get a glass top one. Jess has one and it is really nice.
While we were outside taking a break from the smoke Simon was on the tie out and the neighbor started up his super loud mustang. She went running and the cable went between my toes. This thing is going to cut off one of my body parts sheesh. TG it isn't too bad today. 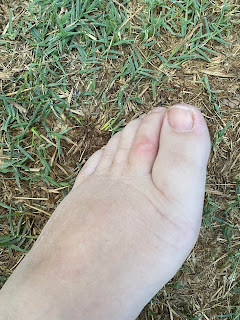 Then Scott and I got in a fight because someone always has to be to blame for accidents happening and of course that would be me since I'm in charge of all things that have to be cleaned. or you know, everything.
When all that excitement wasn't going on I added to my scrap rolls. I got all the 1.5" scraps done 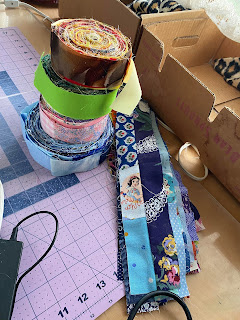 Working on the 1" but I just abandoned it to go hand out down at the bar. They were doing karaoke but I mostly ended up talking to my neighbor Mic. It's funny how you end up being friends with people you probably never would have by talking to them at the bar lol. He's a little crass but he's a good guy. He's almost my parents age and has this huge gray beard/mustache. Could probably hide a small child in there.  His eyes got all messed up and he has pretty much lost all his vision in one eye and the other one just has a bit. Probably from being diabetic and still drinking. He can't work anymore either since he can't see well. He took care of his mom and his sister for awhile when they were elderly so we talked about that stuff for a bit along with everything else. 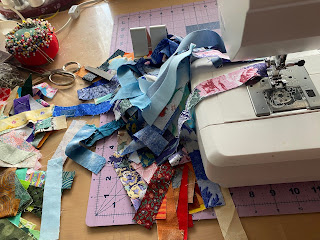 Oh and I had popped over to Jessica's for a few minutes to help with the kids while Daniel got ready for work and Jess was on her way home from the grocery store. This one is hard to get a picture of since he moves so fast now lol. But look at his little surfer wavy hair. It's the best. 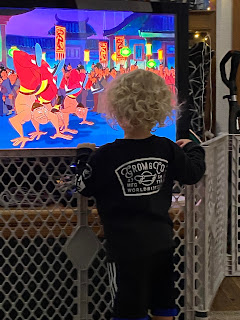 Lilly almost has a mohawk lol. Looking at pictures of Daniel his hair was the same color at this age so we suspect hers is going to change over to the super blonde too. She woke up and was working hard to roll over on this thing so no more being in her cocoon on the couch. She'll be mobile before we know it. 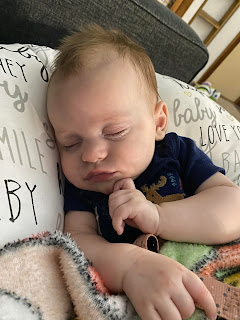 Simon had almost normal poops this morning TG. She must have just ate something that didn't agree with her. This morning I've asked her what she's eating about 500 times. I need to work harder at keeping all the dishes washed since she's tall now and can just grab stuff out of the sink and take off with it. She's eaten quite of a few of my tiny Tupperware bowls I've had my whole life. Little shit.
I actually got some laundry done yesterday. Tons of linens washed! Lots more laundry to go but it's a start. Nothing beats getting into a nice freshly made bed.
Today I have to go down to the clubhouse at 1, then run to the store on the way to my brother's to get Joey a present since I missed his birthday. I had my friend pick up 2 bracelets from the crystal cart she works at to give to Adrian so that is done. Of course it's all overcast outside on the day of a party with a pool. Still supposed to be 93 today though. Still super hot but not as hot as 115!
Pin It
Posted by Julie H at 9:08 AM

That stove shit was crazy. Glad you didn't burn down your house or any of you get hurt!!!😲

@Peg yes it was terrifying! Still need to get a new stove and a fire extinguisher!