Good morning happy Friday! I am hoping we get the early release email soon. Usually before a holiday weekend we get off 2 hours early (except when Frump was in office).
Trevor came home early from his camping trip yesterday. He only stayed one night then said he was bored and lonely. The camp stove stopped working so that was the final straw he said haha.
Snookie is sad that Simon is back but Rusty missed her haha. 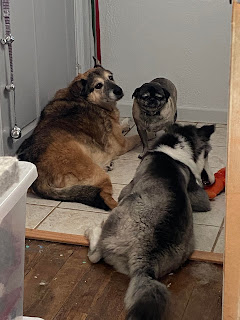 I went through the 2nd bag of fabric I had and put it up on the FB group but only had one person pick a few things. Oh well. We'll try again later. Might go through one of the other boxes of fabric I have from my aunt's mom and list some of that. Putting the money I make towards my car payments. 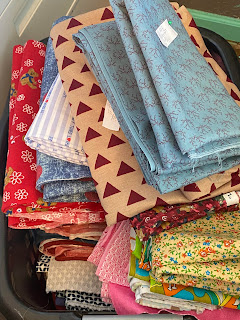 The rest of yesterday I worked on my little zip bags. Working my way through the big pile I made myself haha. I was doing the piecing/ironing on the fleece and pinning the zippers in. I still have a big pile to go. 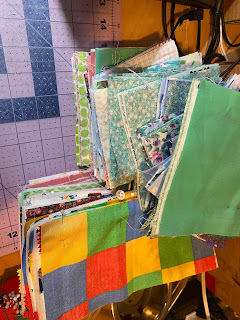 So far no plans for the weekend. Maybe a BBQ would be nice but it is going to be 1000 degrees outside so it's a bit hot for that when you don't have a pool. We'll see. I need to go to the post office today since I didn't get that done yesterday, run by the pharmacy and I should really go to the store and get some groceries. I've been living off PB&J the last couple days lol. I don't even know how I would go about feeding myself if I was the only one here all the time. I have not been on my own since I was 18 and that was only like a couple months before I met Scott and he moved in with me. I don't even know what I ate back then.
Pin It
Posted by Julie H at 9:15 AM

I know what I'd eat. Not much. Salad for dinner, ice cream for dinner. I cook because of Rick. I can live off a bowl of cereal and be just fine.
I am so looking forward to fall like weather. I'm tired of 100 and 90s. I hear you - who wants to sit in that? I am not rich enough for a pool or I'd invite you over. :-)