Good morning happy Friday! Never got around to blogging yesterday since I actually went into the office for the first time in forever.
I had to go out the emergency exit which is a tad bit sketch but I made it. I drove through an area that is flooded out into the usual over flow areas but not into the road so that was good. The poor little park that is by the river on my way is almost all underwater again. So much for nice grass.
I had 4 online meetings yesterday which is just ridiculous. First one with everyone that has my job in the area and our boss. Then one from one of the offices I help and their other department that I've been told I don't have to deal with anymore but it was kind of good to be there since it does affect me a bit. Then a TWO HOUR long meeting with blah blah blah I don't even know what you're talking about with everyone in California. Jesus they need to keep us out of those and just include us on little parts. I zoned out after the first 5 minutes since I didn't know what they were talking about. THEN another office meeting. F&ck me that was too many meetings for one day my brain was fried. Thank God I don't have any meetings today.
After work I just went and picked up Popeye's per Trevor's request for dinner. I came home and redid my hair and make up and then went to darts. I won one game and got a low ton (score 119) so that was cool since at the end we get paid for those lol. I hung out til about 10. 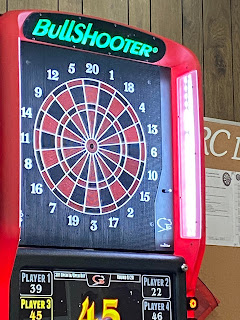 That was two days in a row down in the kitchen. Wednesday I went to bingo for the first time in forever. I won two special games at $10 each but had to share one with someone else who won so got $15. They raised the prices of the games a bit so more people come again and you can actually win something worth it. 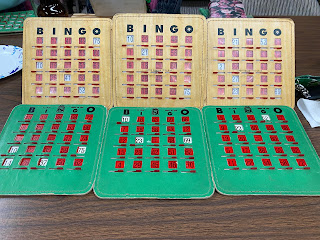 Sorry not sorry this is hilarious 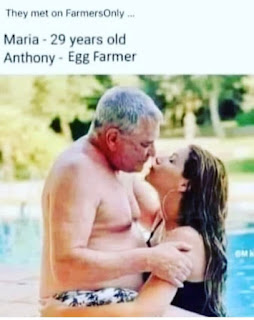 Sun setting when I got home last night. The field is so muddy but the sky is pretty lol. 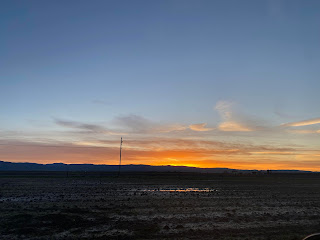 Today's big plan is laundry and grocery shopping. I need to make a grocery list but I won't even be here most of next week. I need to get some more make up too everything is empty at the same time. Might push it off til tomorrow since I don't want to go anywhere but we have no food so maybe not lol. The fun part of living in the country, everything is more effort.
No plans for the weekend except probably babysitting on Sunday!
Pin It
Posted by Julie H at 9:23 AM

There are days that I have so much running around to do and I just don't want to do anything. Why do we have guilt if we blow it off? I can do it all the next day. As for your makeup. Yes, I just realized I needed mascara, base and blush. All at the same time. My skin has changed due to chemo and I am a hot mess. Which is added fun to my life. LOL But I can see!!