Bars and Bike Rides and a Birthdays

We had such a busy weekend. Funny how that can happen from a weekend with "no plans".

Friday night Scott and I went down to our little neighborhood bar to just have a couple drinks and relax. When we got there there was a pool tournament going on. There were quite a few people there and some people I had never seen before were battling it out on the pool table. 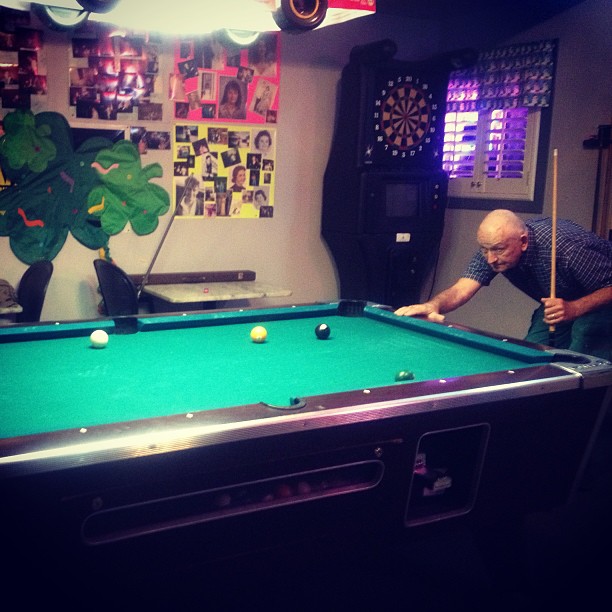 I have no idea who this guy is but he was awesome. When he was done he asked me  hold his cue stick and then left. I was like um, how long am I supposed to hold it? I thought maybe I was holding it so that his friend could use it when it was his turn but he didn't take it. Eventually I handed it off to Scott because, um, awkward? Scott held it for awhile and then leaned it up against the bar by the guys friend. I hope it ended up where ever it was that it was supposed to go. I'm pretty sure it was still there when we left.

Saturday morning we got up no where as early as we wanted to and went for a bike ride. Scott wanted to just stay in the area and I was like "but it's so boring". it's super flat here and just long straight roads. So we strapped on our helmets and left the house and started traveling the way I drive to work. Yeah, haven't seen this landscape since YESTERDAY. Once we got to the end of the long road we turned right instead of left and got to see some different scenery. We decided just to take this one road and see where it ended up.

It ended up windy as hell. I was riding in a lower gear just pedalling pedalling pedalling. Pushing against the wind. Wishing I had some sunglasses (again) and wondering if anyone would care if I stopped to pee in the orchard on the side of the road. We stopped for a minute and Scott took a couple pictures.

I should have snapped one of him too but I didn't. I suck sorry. See those mountains behind me? That's where we rode to. 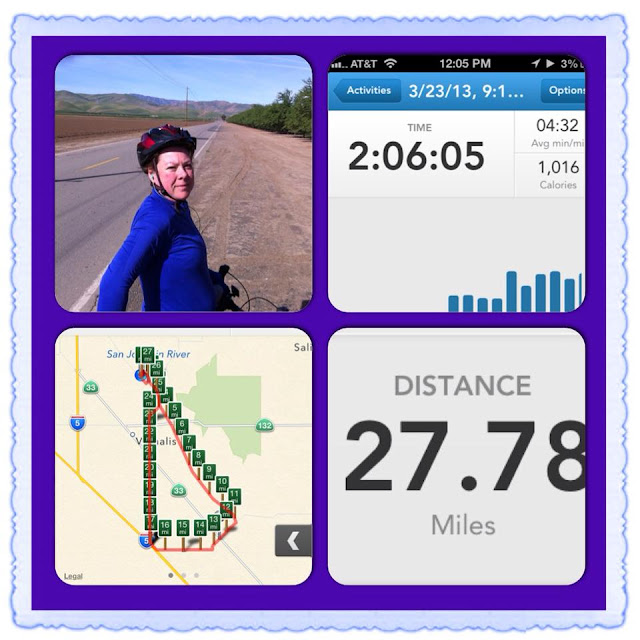 We rode all the way to the Westley truck stop where it was BEYOND windy. BUT they have bathrooms! And a SUBWAY! So we took our bikes in with us and went into Subway to use the bathroom and then had lunch. At ten am haha. Believe me I was plenty hungry for it.  While we were eating Scott was looking at his map on his phone and realized we were right next to a road that would take us real close to home.

I was a little sad we weren't going back the way we came because HELLO the wind would be behind us. But I figured whatever, and we took the road. And my eyes watered as we rode in the wind and I cursed myself for not going into the Chevron to buy a pair of sunglasses.  The only breaks in the wind were when we were between the orchards on both sides of the roads. It was still windy but not quite as bad.

When we got home I got so cold. I was shivering! I went and laid in bed and then fell asleep for about two hours. When I woke up I took a shower and then I was super hot! I was wondering if I was running a fever or something but I took my temperature and it was fine. I think I just wore my body out a bit with all that riding in the wind.

When I got out of the shower Scott was asleep. Glad I wasn't the only one that was tired! We eventually had to leave and go pick up some cake and ice cream and take it over to Scott's Mom's house for her 83rd Birthday! 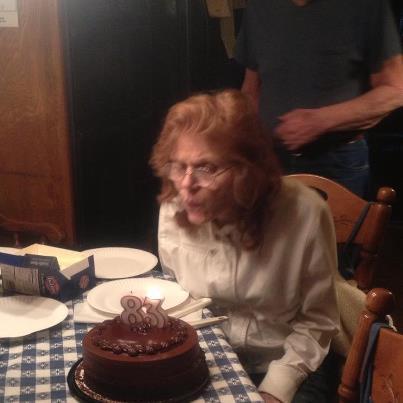 We had some Papa Murphy's Pizza and of course cake and ice cream. I had a nice time visiting with Scott's sister and my in-laws. 83 years. I hope I'm as lucky!
Pin It
Posted by Julie H at 6:34 PM