Yesterday I finally went to Dick's Sporting Goods and picked up some bike capri's. I figured I'd go with the capri's instead of shorts since we aren't quite in to the warmer weather yet. They didn't have any pants so that wasn't even an option. I also picked up some riding gloves. My new bike really hurts my hands.

Today I got home from work and suited up and took my bike out on the BIG roads. I've been riding around our neighborhood for about a year and I was so excited to finally go out and hit the road. One problem though. It's pretty flat, which is good, but it's kind of a boring ride. Good for getting used to my bike though. 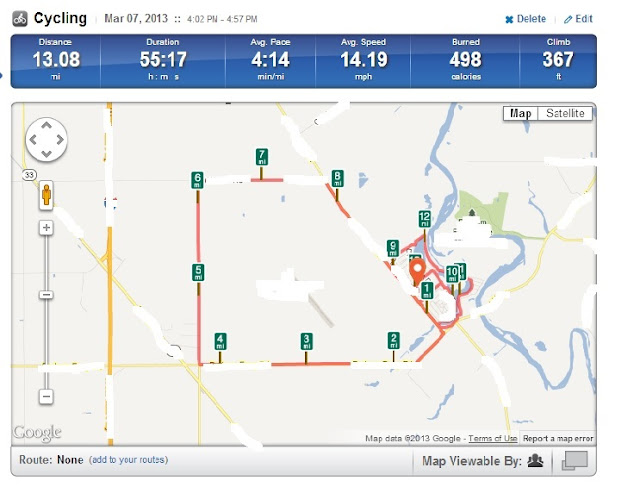 I rode in pretty much a big square (kind of) and then back around my neighborhood. I probably would have went farther but 1.)  my phone battery was almost dead and 2.) I had to get back to take the kids to the school for the science fair and 8th grade graduation meeting.

It ended up being about 13 miles. Not too shabby! I ran 2 programs, Strava and Runkeeper (on the cycling setting) and they were off about 100 calories from each other. Lose It added another 100 calories on top of the Runkeeper's one. I just went with the average speed and time and put it into my Lose It and called it good enough.

So things I learned while riding out on the "big road"

1.) I need sunglasses/eye protection
2.) Dead animals get really flat on the side of the road
3.) Only wear one headphone
4.) Cars drive really fast
5.) Big trucks kick up dirt and it flies in your eyes when they drive by (see #1)
6.) Farm workers look at you like you are nuts when you ride by
7.) Riding on the wrong side of the road seems much safer (just as long as there are no oncoming cars.)
8.) Take some water
9.) Everyone you know will text you while you are riding
10.) Take a friend to make it more fun
11.) Take some pictures to make your blog post more interesting

We'll probably go out riding somewhere this weekend. Where to? I'm not sure!