Yesterday after we got home from our run and today were pretty miserable weather wise. It's HOT. Like triple digits all week.

Yesterday I pretty much just laid around and tried to read my book club book. I kept falling asleep. This morning I had like 3 pages left so I finished those up and then just sat around all day until it was time to go to bookclub.

We read Janet Evanovich's Notorious Nineteen. I'm not going to lie I did a little groan when this book was picked. I really liked like the first ten. I thought the first one was so hilarious I went out and bought it for my Mom. I NEVER buy books new so that tells you how much I liked it. Anyhow, then she started in with all the in between the numbers books which I just thought were pretty dumb and the books just kept coming and they are all basically the same.

Morelli is hot. Ranger is hot. Lula is a slut. Grandma is silly and gets into mischief. They chase someone and solve some crimes. A car gets blown up.

Yep, pretty much how this one went too. Although I still found some parts funny I'm pretty sure I didn't laugh out loud. So if you are into reading an easy light hearted book this one is for you.


It's my turn next to pick a book so I picked Sandra Brown's The Switch. Mostly because I already listened to the audio book and it was on Kindle pretty cheap. Well I THOUGHT it was. When I got home (after telling everyone what book we were doing) I realized it says it's not coming out on Kindle until August. That's so not going to work. DOH. So now we are going to do Sandra Brown's Rainwater. I have that one on audio book but some reason my computer won't recognize the disc in there so I can't transfer it over to my phone. DARN IT! So I'll just have to listen to it in the car I guess.

Anyhow back to book club. This time it was at Marian's house. She's a great grandma (we have a couple of those) and is super cute. BUT check out what happened!! 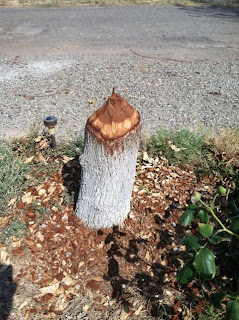 Beaver's ate her tree and hauled it away! They also chewed half way through her other tree in her front yard. It's now wrapped with chicken wire. Hopefully the tree won't die. She lives right across from the lake. Kind of makes me glad my house is a little farther away! It's been a lot of hard work to get my trees to grow!

After book club I came back home and sat around some more. I told Scott I'M BORED!! I know! I never say that. Finally I started going through of the books I had on Amazon and sorted through them. I decided to just make 2 lots and put them on Ebay to get them out of here. Hopefully someone will buy them.

I have a trunk load of stuff I've been setting aside for the thrift store and a little bag of books for each of my nieces.

I need to work on all the patterns I've collected and get those out of here too. Originally I was putting them on Etsy but I noticed that you can put them on Amazon too. Might be worth it, it's pretty easy to sell on there. They just take more time to go through and make sure they have all the pieces. Plus I like to iron them and fold them all nice. It's kind of a relaxation thing for me. But it is time consuming and that's why they've all been sitting in a box. I guess this heat wave will be a good excuse to work on them. God knows it's too hot to do anything outside.

psssst guess who just found his password to his blog?