Monday morning we got up and hit the hotel breakfast again. I was STARVING since all I ate the day before for dinner was a piece of chicken. I loaded up on the hotel carby breakfast and then waddled back to the room and laid in bed some more. We didn't have to check until eleven and I didn't really see any reason to rush around. Eventually though we got moving and we were on the road by ten thirty.

First stop? Jack In The Box. I was still starving.  Then we went back and took the road that we rode our bicycles on all the way to Mendocino.

As our car labored to make it over the hills we thought about how amazing it was that we had actually rode our bikes over that mountain. We may not have done it easily but we did it nonetheless.

When the road ended we were in Mendocino. Twenty years earlier we took our honeymoon in the Mendocino area. We rented a house at "Irish Beach" for about five days. I had actually looked into renting the house again but it wasn't anywhere to be found.

While we were on our honeymoon we spent most of the christening every room, doing puzzles, cooking our own meals, driving up and down the coast and trying not to spend much money.

Because we didn't have any.

It was fun to be in the same area 20 years later.
First off we walked around the little town of Mendocino.

It's too bad we didn't have front facing cameras back then. We would have had a lot more pictures of us together. Instead we had a little 110 camera with a flip flash. That stuff wasn't cheap! 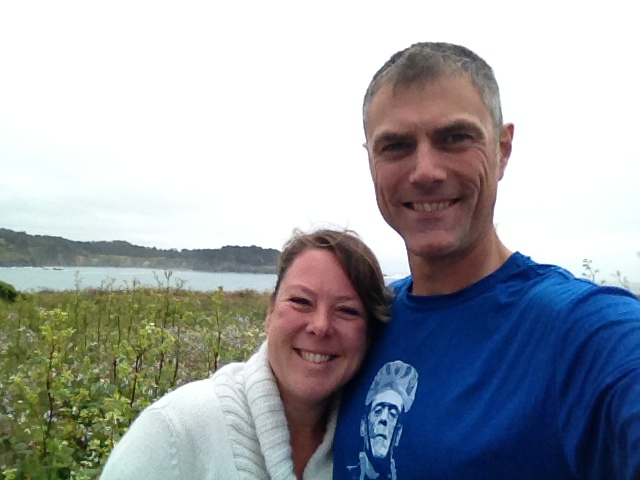 I LOVE this wooden flower lined walk way to this garage building. 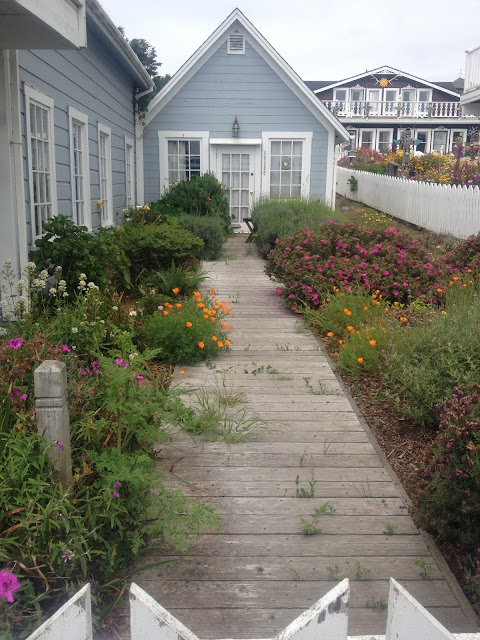 There were tons of these weird flower tree things. Weird. Anyone know what they are? They grew probably ten feet tall! 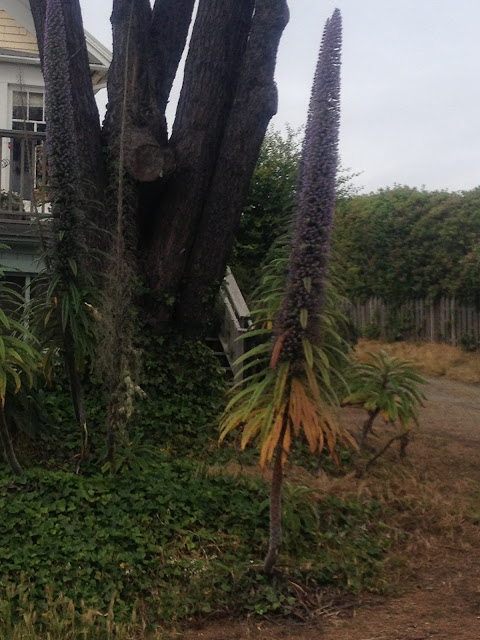 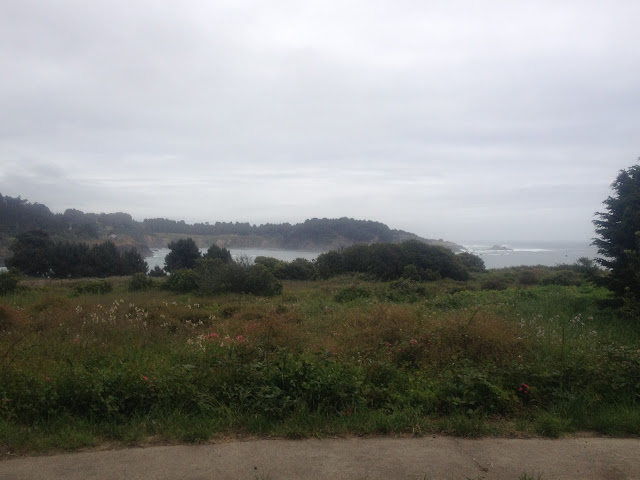 I love this little wooden fence with all the flowers. This place had a ton of neat sculpture type things made out of driftwood. 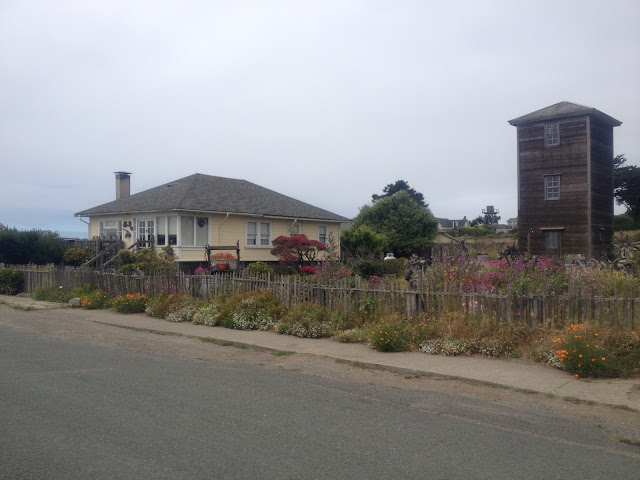 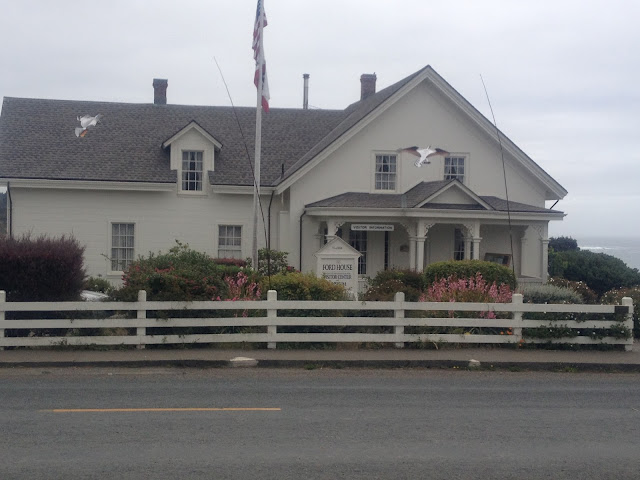 I would be happy to just walk around taking pictures of all the cute houses all day. But I had Scott with me ;)

After that I drove us down the coast. We found the little area where we rented the house on our honeymoon and drove right to it!

It's kind of weird that it doesn't have a drive way. Scott said he thinks it was like that back then. I don't remember. It looks like someone lives there now. Scott said there is a new front door (I don't know how he remembers stuff like that?) but other than that it looks the same. It also has a house number instead of a sign that it was the Engle House. We only saw one house there that still had a name on it so I think maybe they don't rent many houses there anymore.

This is the side that faces the water. Along those windows was long benches that you could sit on. The kitchen was also able to see out the windows. That part that sticks up is a loft room. 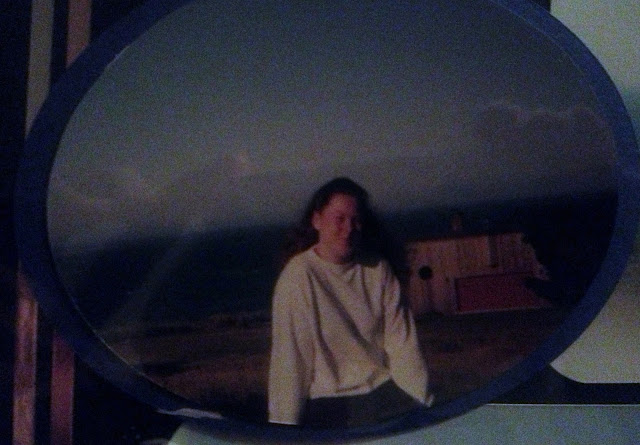 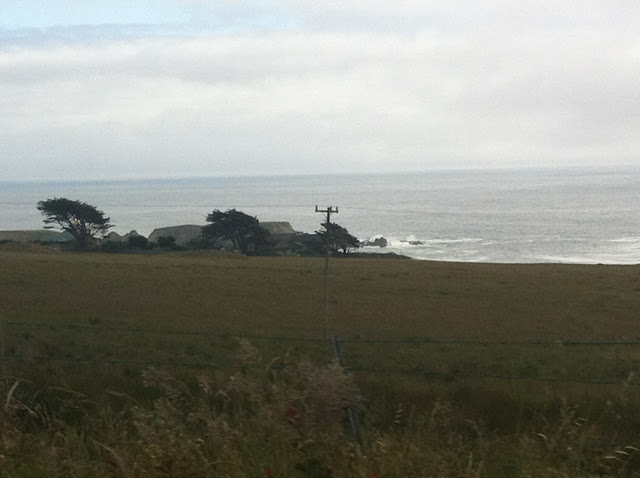 I'm so glad we drove there. It was really fun to reminisce about our time there.

We continued driving down highway 1 and stopped in the town of Gualala to EAT again. I swear I was a bottomless pit!! So hungry all day. We ended up stopping at Bones Roadhouse.

We were seated next to the window but this was my view. 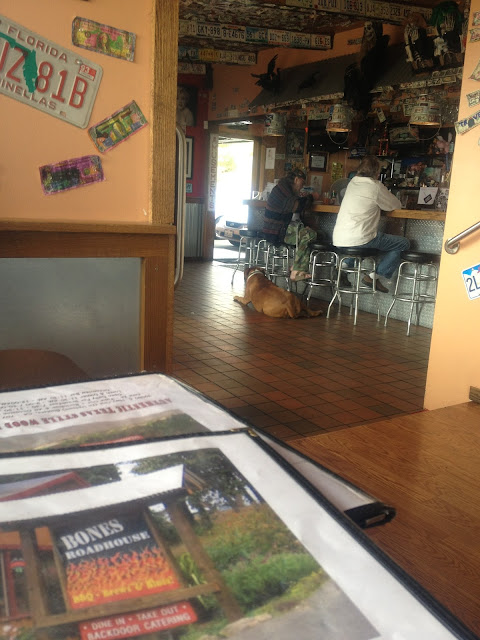 Gotta love a place that lets a dog hang out in the bar.

The view to my side and behind me was the ocean. 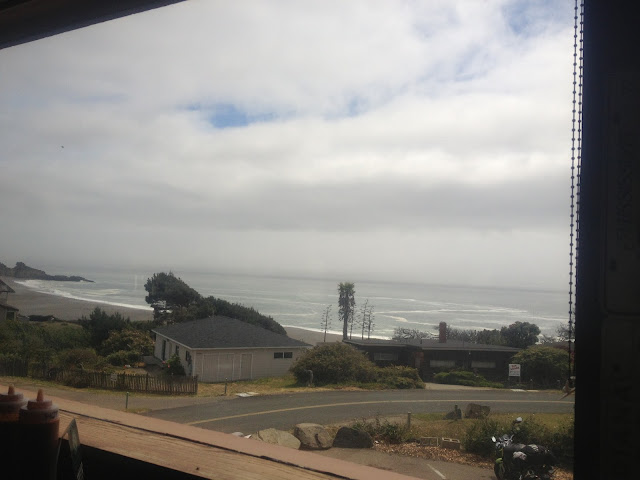 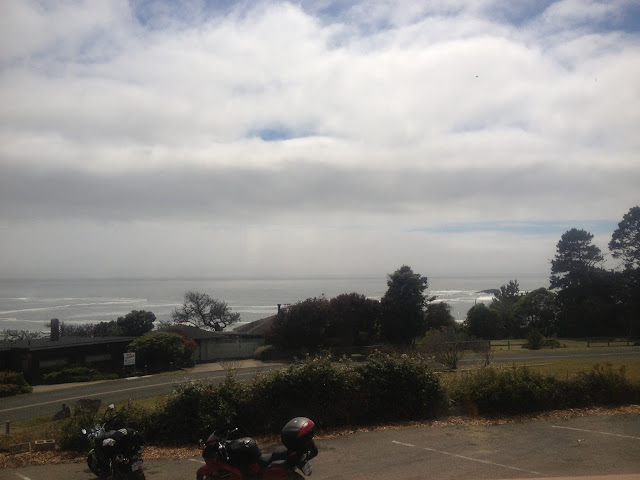 and directly in front of me? A pretty nice view too ;) 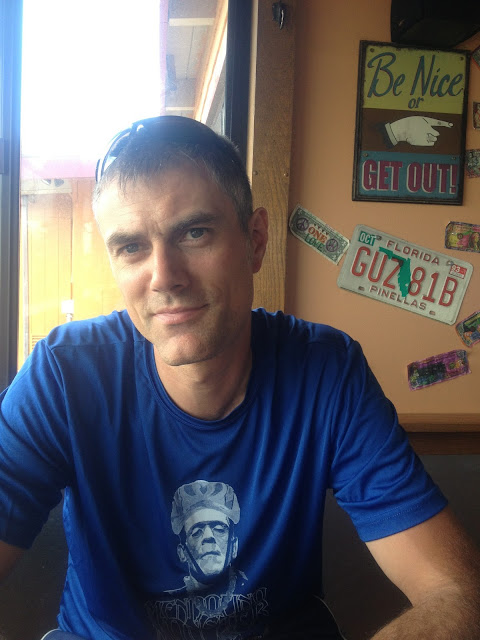 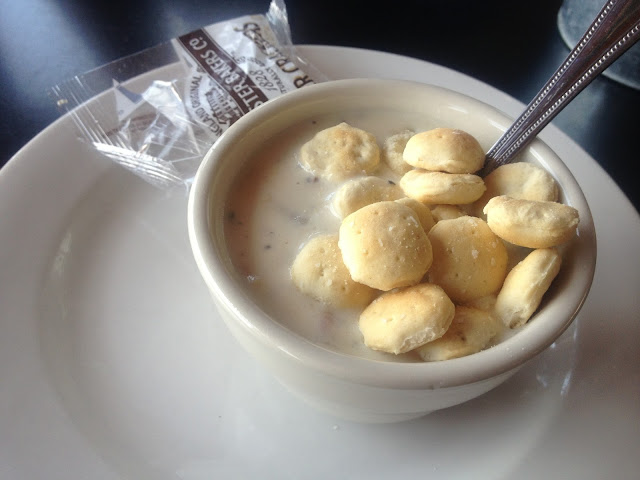 and fish and chips 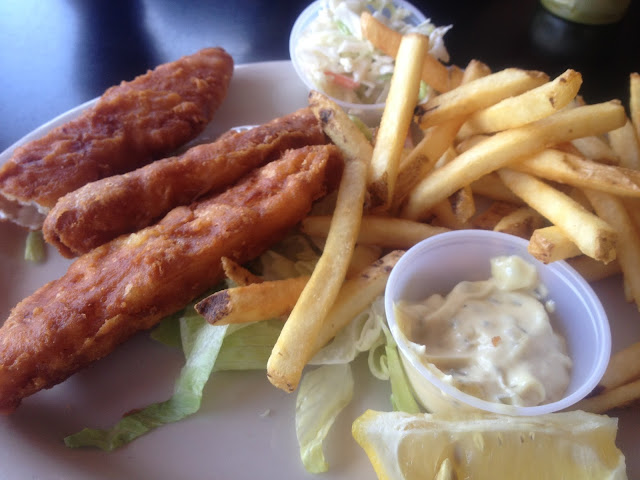 It was all really good! I bet that place is packed on the weekends. I'd definitely go back if I was in the area.

After dinner it was just a long ride down the coast 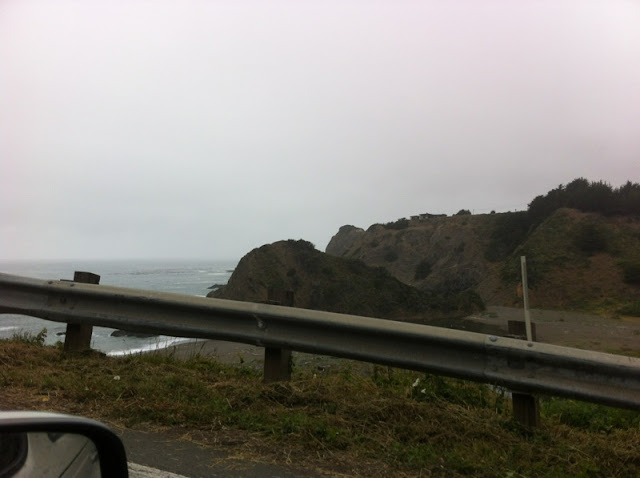 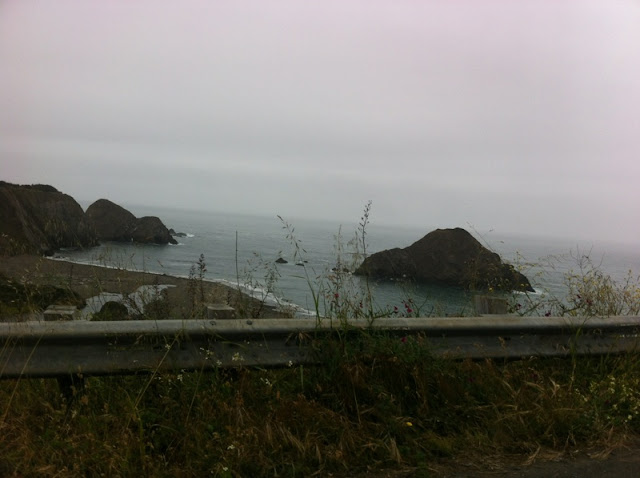 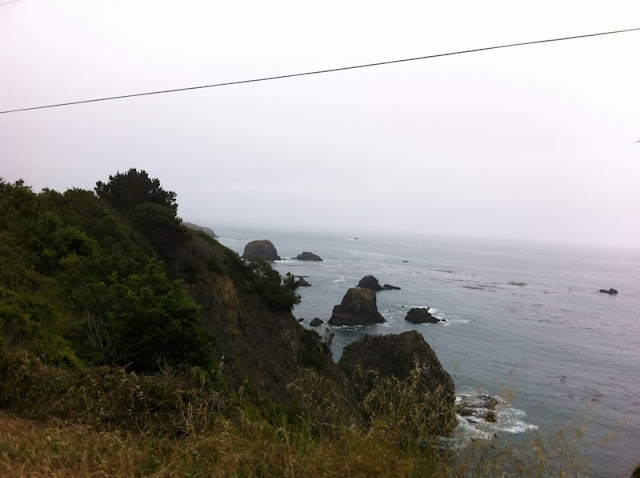 and then we had to head inland to get home. I drove until Petaluma and then let Scott take over. It was a lot of hours in the car and driving along the coast was exhausting. We finally got to my Mom's to pick up the kids around nine. We visited for a bit and then had to head home.

It was a very nice vacation (minus the torture ride part!)