Redwoods Run In The Park


Saturday morning Scott and I got up early to go run the Run In The Park Redwoods 10k. The area the race was in was very pretty (Redwood Regional Park). We generally don't do much in Oakland (it's scary there!) so it's nice to find some NICE parts of it. 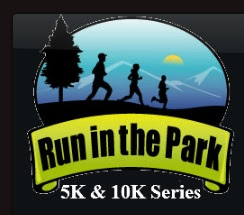 It took us a little over an hour to get there. This was to be Scott's first 10k. I knew it was going to be super hard for both of us. I had not ran 6 miles since my half marathon. We did run 5 earlier in the week but that was on flat ground around our neighborhood and this was anything but flat.

We got there with plenty of time to spare before the race. We got our baggies with our goodies, took them back to the car, hit the potty and still had time.

A pre-race photo. I almost forgot to do one of those but Scott remembered. 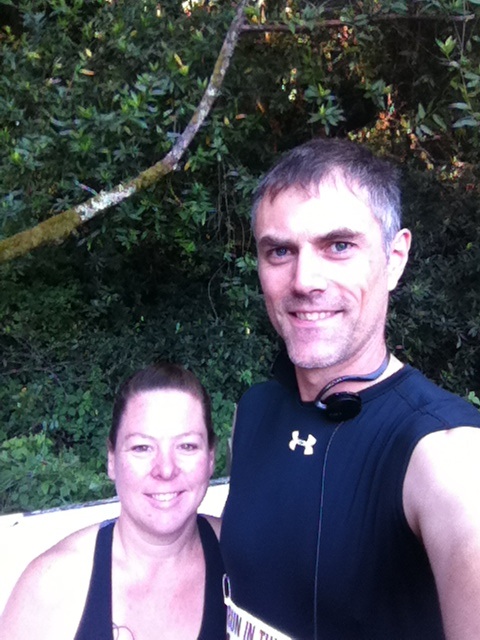 Finally the race started and we were off! We stayed together for about a mile and then I put in both my ear buds and just worried about myself. I ran for awhile and then the hills started to get really steep so I started walking up the hills to try and save some of my energy. There were A LOT of hills.  I probably ended up walking about 3/4 of the race. A bit of a fail but hey at least I was out there doing it.

The hardest parts were right after the 5k turn around. I keep leap frogging with this one guy. He was doing the walking up the hills too for the most part. Sometimes he'd start running before me.
I stopped at all the water spots for a minute or two to drink some water and cool myself off by putting some on my head and down my back. It was definitely warm out there! After the last one I talked to this girl a bit and we leaf frogged eachother for the rest of the race.

I stopped at the top of the hill to take a picture and the guy and girl both ran past me.  Figures! 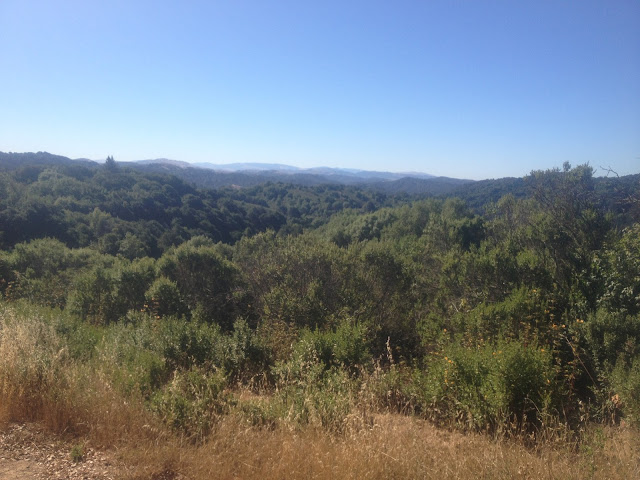 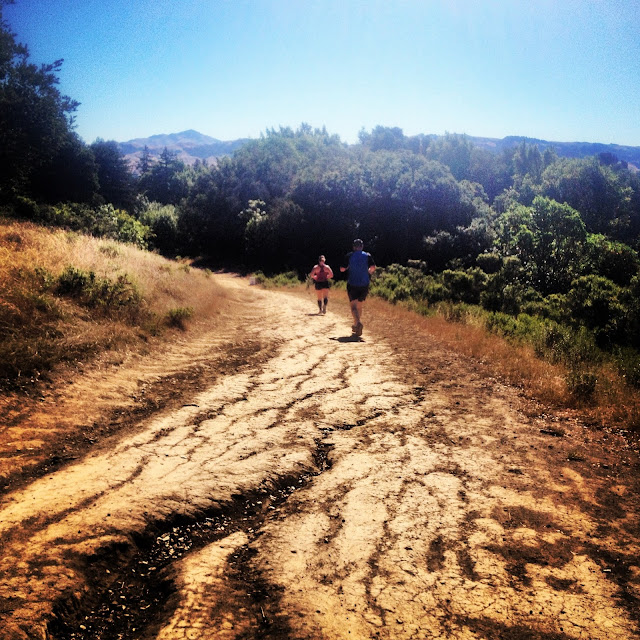 I never did catch all the way up to them but she was only a few feet ahead of me at the finish line.

What's really funny is Scott stopped to take a picture at the exact same spot. How funny is that? A sign we've been with each other forever! 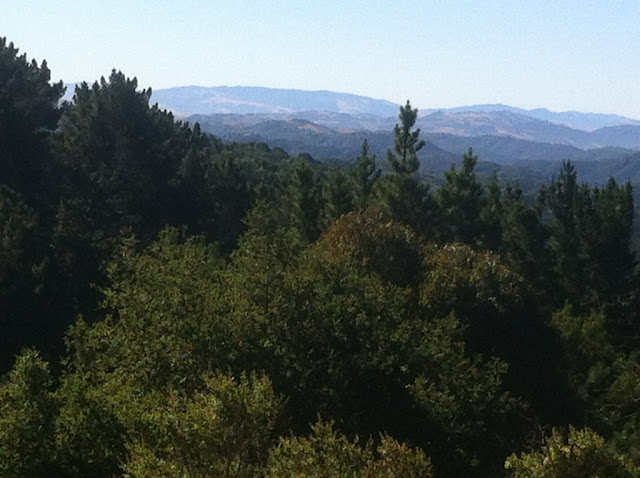 The last part of the race was downhill of course and I was trying to be careful to not go too fast and hurt myself. I was almost done and somehow twisted my ankle a bit. DARN IT! Luckily it didn't really hurt but it's a little bit sore today.

I finished the race somewhere around 1:20 on their clock. It wasn't a chip race so the times aren't 100% but close enough. I think Scott said I was like 19 out of 23 or something for my age group. Hey at least I wasn't last!

My Runkeeper ended up being about a half mile off again. It seems to do that at ever race now. I might have to start saving my pennies to get a Garmin. Might also have to start actually using cash so I have change... 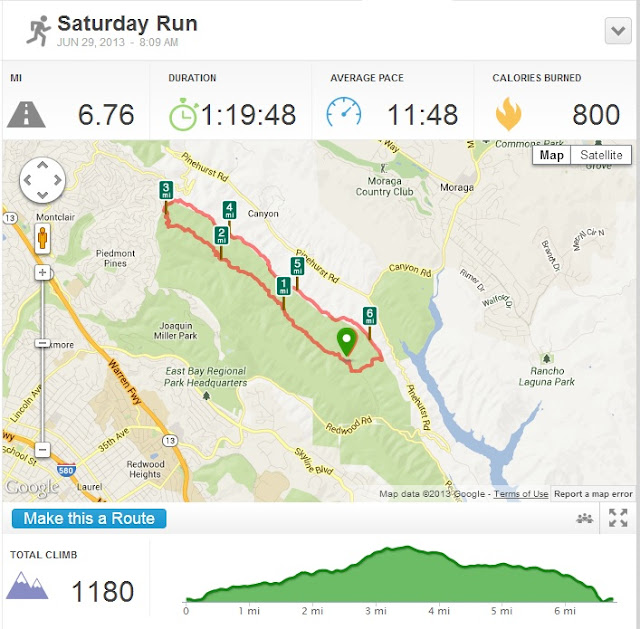 When I got done I looked around to make sure Scott didn't decide to turn around at the 5k marker. He wasn't anywhere to be found so I guessed he went in for the whole 10k! I found the water and walked to the potty and then came back and watched for him. 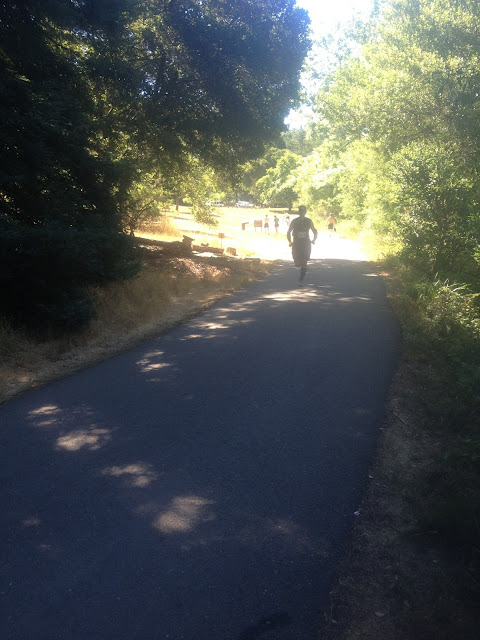 He did it!! So proud of him. That was one HARD trail. He told me I must have been getting him back for the bike ride. I told him he could pick the next race haha. 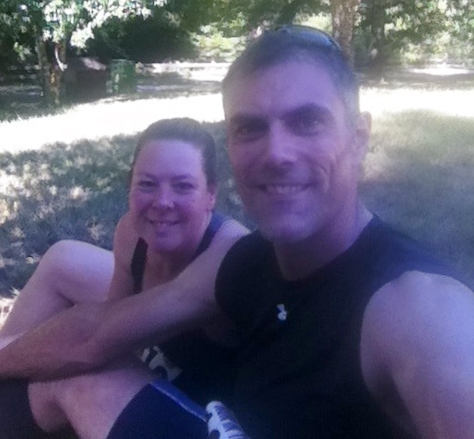 After the race we started towards home and kept our eyes out for somewhere to eat. We decided to stop in Dublin and see what we wanted in the big shopping center. We settled on The Red Tractor Cafe. It's a nice little place and the food was REALLY good.

I got an egg white omelet. You could pick 3 things off this list so I got bacon, cheese and tomatoes. It was really filling. It came with home fries also. The home fries had a lot of rosemary in them which wasn't my favorite but ketchup makes everything better. 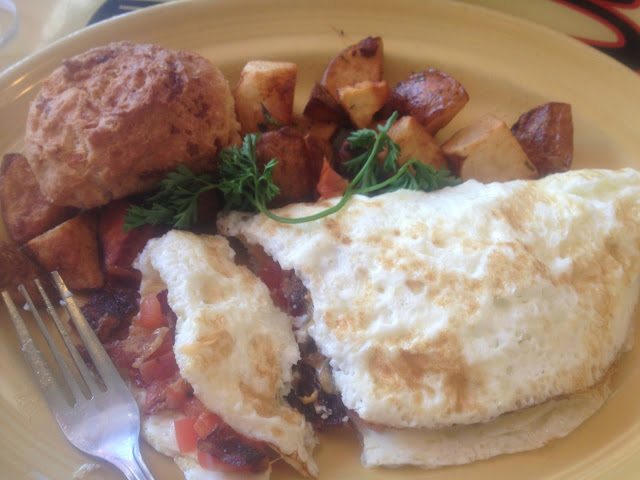 I gave the biscuit thing to Scott.

After brunch we went over to Sport's Chalet. Scott and Trevor have been building a bike together and he needed a chain. I had a coupon from there on my phone so I went and checked out their cycling stuff. I ended up getting a cycling jersey and a pair of cycling shoes, both were half off and Scott got the bike chain and brake pads. We got out of there for under $100. Not too shabby! Just the shoes would have been $100 before they were marked down.

I told Scott now we are one more step closer to actually looking like we know what we are doing when we go cycling. I haven't tried out the shoes yet since it's 100 and freaking death degrees outside right now but I"m excited to try them.